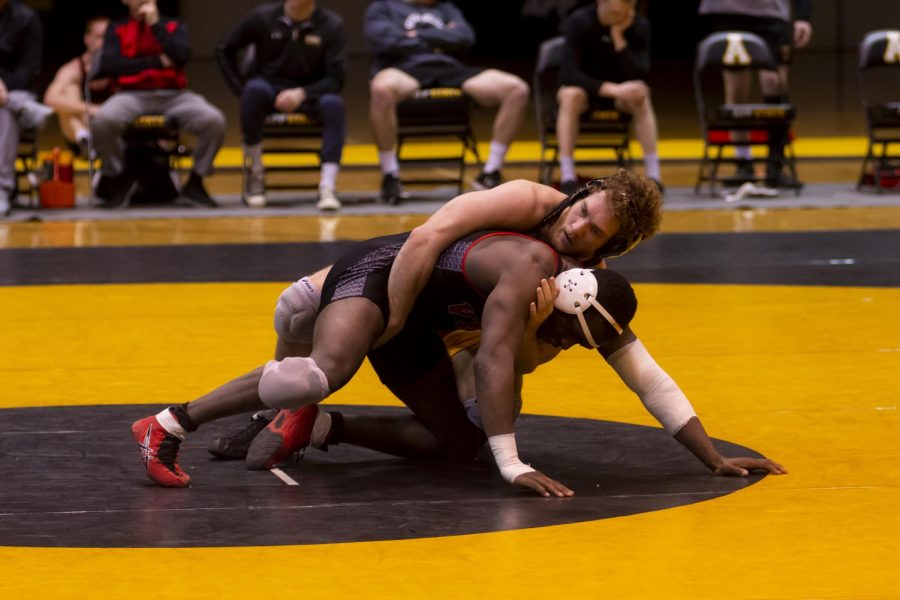 Junior Thomas Flitz grapples with an opponent from VMI on Feb. 23. Flitz and the Mountaineers will host the SoCon championships at the Holmes Convocation Center on Sunday, March 8.

Consistency has been an important word for the App State wrestling team, and as they wrap up the regular season and head to the SoCon championships, they look to keep the ball rolling in hopes of winning it all.

The No. 27 ranked Mountaineers are hosting the tournament for the second straight year after being voted to host by the rest of the league in 2018.

App finished second to Campbell at last year’s conference tournament and hopes to take its momentum from the regular season and come out on top this time around.

The Mountaineers are currently 9-3 on the season and finished 6-1 in conference with their only conference loss coming to Campbell and their other two losses coming at the hands of North Carolina and N.C. State. All three teams are currently ranked in the top 25.

The Mountaineers have forced four shutouts this season and have also held their opponents to less than 10 points on three other occasions as well. These four shutouts are the most out of any team in Division 1 wrestling.

“They just continue to go in week in and week out and are doing a great job and being consistent in their preparation,” Head Coach JohnMark Bentley said. “It’s a great testament to the kind of guys we have.”

Leading the way for the Mountaineers are six different wrestlers that are ranked in the top 33 in their respective weight classes. These wrestlers are Johnathan Millner (149), Cary Miller (285), Matt Zovistoski (157),  Thomas Flitz (174), Sean Carter (125), and Codi Russell (133).

While hosting the tournament is an advantage for App State, they have not let that change the way they’re preparing for it.

“We’ve had two weeks to prepare for it, and we’re preparing for it the same way we have the entire season because we’ve just been doing so well,” Fitz said.

Along with the support from their fans, the team feels supporting each other is just as important to their success.

“We all motivate each other, we all pick each other up,” Miller said. “Honestly, the fact that we’re so close knit.”

Bentley is equally as confident in his wrestlers as they are in each other, as multiple members of his team have beaten nationally ranked opponents.

“I think it speaks to the balance of our lineup,” Bentley said. “On any given day, I  feel like all 10 of our guys can step up and do what needs to be done to secure a win.”

Bentley and his team have a week to prepare before the rest of the SoCon travels to Boone on March 8 for the conference tournament at the Holmes Convocation Center. Competition is set to begin at 10 a.m. and championship finals begin at 7 p.m. Adult tickets are $15, kids 6-12 are $10 and students get in free with their ID.