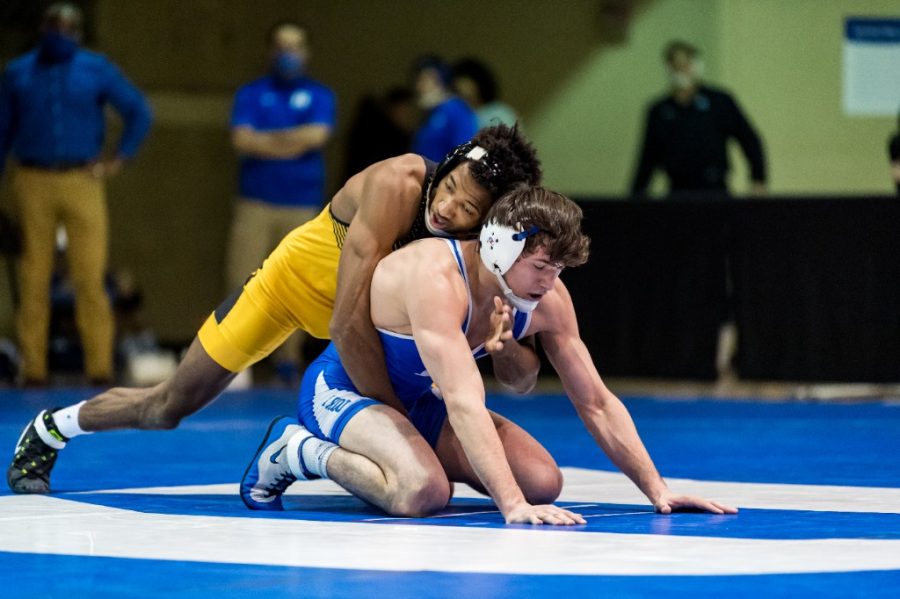 Redshirt senior Jonathan Millner wraps up Blue Devil Josh Finesilver in a highly-ranked contest between the two. Finesilver’s two losses of the season have both come against Millner.

The Mountaineers started strong, opening up the contest with a 22-0 advantage after the first six matches.

“I was proud of the way that our guys stepped out, battled early and put us in the driver seat,” said head coach JohnMark Bentley after the win. “Obviously, there are some things we can improve on, but I saw a lot of good things as well.”

Redshirt sophomore Caleb Smith opened the contest with a 14-2 major decision victory in the 125-pound matchup. No. 26 super senior Codi Russell secured a victory in the 133-pound match with a 26-8 tech fall. In the 141-pound matchup, sophomore Heath Gonyer claimed the first dual victory of his career with a 6-2 decision, extending the App State lead 12-0.

All-American, NCAA qualifier and No. 6-ranked redshirt senior Jonathan Millner faced off against Duke’s No. 8 Josh Finesilver in the 149-pound match. Millner defeated Finesilver at last season’s NCAA Tournament to secure All-American honors and again earlier this season at the Mountaineer Invitational Nov. 14. Millner went on to win an 8-3 decision, defeating Finesilver, who is now 21-2 this season, his only other loss also against Millner earlier this season.

The Mountaineers continued their dominance with decision victories from redshirt senior Cody Bond, 157, and No. 21 redshirt junior Will Formato, 165, leading App State to a commanding 22-0 lead.

Duke secured victories in the final four matches, with 13th-ranked Matt Finesilver winning the 174-pound matchup against App State super senior Thomas Flitz with a 4-0 decision and an overtime loss from redshirt junior Barrett Blakely through decision at 184.

Freshman Wyatt Miller fell 7-1 in his first dual start at 197, and redshirt junior Michael Burchell lost a 5-2 decision in the heavyweight division.

The Mountaineers next take the mat at home against Virginia Military Institute with a doubleheader matchup Jan. 21.