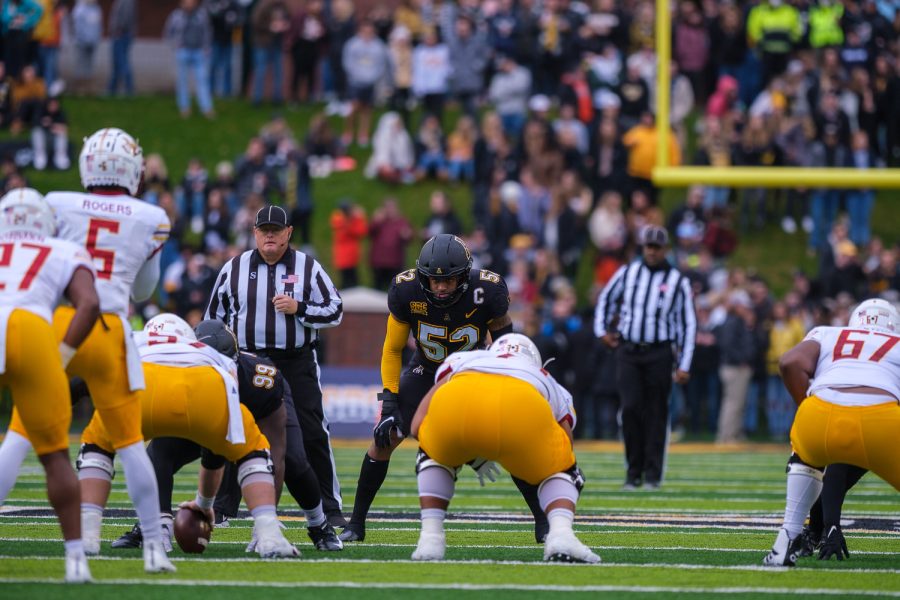 One Mountaineer has become paramount on defense during his football career as a Mountaineer. Senior inside linebacker D’Marco Jackson has made memorable moments on the field while leading the team as a team captain off the field.

“He’s been a special type of player. He gives you everything he’s got. He’s just an incredible leader on and off the field,” said defensive coordinator Dale Jones. “All the guys love being around him, coaches included. He’s just a remarkable person.”

While Jackson is now a decorated player, his career did not start that way. In 2018, Jackson played primarily on special teams and as a backup inside linebacker. Many App State fans were introduced to Jackson the second game of 2019 against Charlotte when he returned a blocked punt 16 yards for a touchdown.

“It was just like a thriller, finally getting out there on the field and just making a play,” Jackson said. “It’s just like, the best feeling seeing the crowd and my teammates go crazy. It was a heck of an adrenaline rush.”

This explosive play led to Jackson receiving six starts that season. However, this was not Jackson’s only signature performance. After not playing in front of fans during the 2020 season, App State defeated Elon 44-10 in their 2021 home opener. Jackson was able to welcome the Mountaineer fan base back by notching a career-high three sacks.

“Supporters don’t realize the impact they have on the players. They have a big part in the App State gameday,” Jackson said. “They make it feel like home. It’s a blessing to be out there and playing.”

This strong play continued throughout this season as Jackson reached his career highs in tackles, tackles for loss and sacks. In addition, Jackson proved to be a versatile player, becoming the second Division I player since 2000 to have at least 110 tackles, 18 tackles for loss, six sacks and 18 passes defended.

Jackson has matched these achievements by embracing his role as a team captain, as voted by players and coaches.

“I take great pride in it, and I’m glad that the guys trust me with this position,” Jackson said. “I just want to make sure that I do the right thing every day by leading and setting the right examples.”

Jackson wanted to set the right example for not only his teammates but the future Mountaineer football players by being a role model.

“People don’t realize it, but when I see kids out there, that’s like kids out there giving me handshakes, that makes me want to go harder,” Jackson said.

Jackson’s versatility and leadership traits have resulted in an invite to the NFL combine and as he became a highly-rated NFL Draft prospect. This is why he will be leaving to pursue a career in the NFL next season.

“I think he definitely has the ability to play in the NFL. He does all the right things,” Jones said. “He studies the game well, so he’s gonna know it, which is very important. He’s got a great base with all the games that he’s played here.”

While Jackson is leaving Boone, he said he will miss the atmosphere created by the mountains and the people that inhabit the town.

“The mountains are special, but the people who live here are more special,” Jackson said. “They helped me out a lot going through this whole process, and it’s like a family atmosphere.”