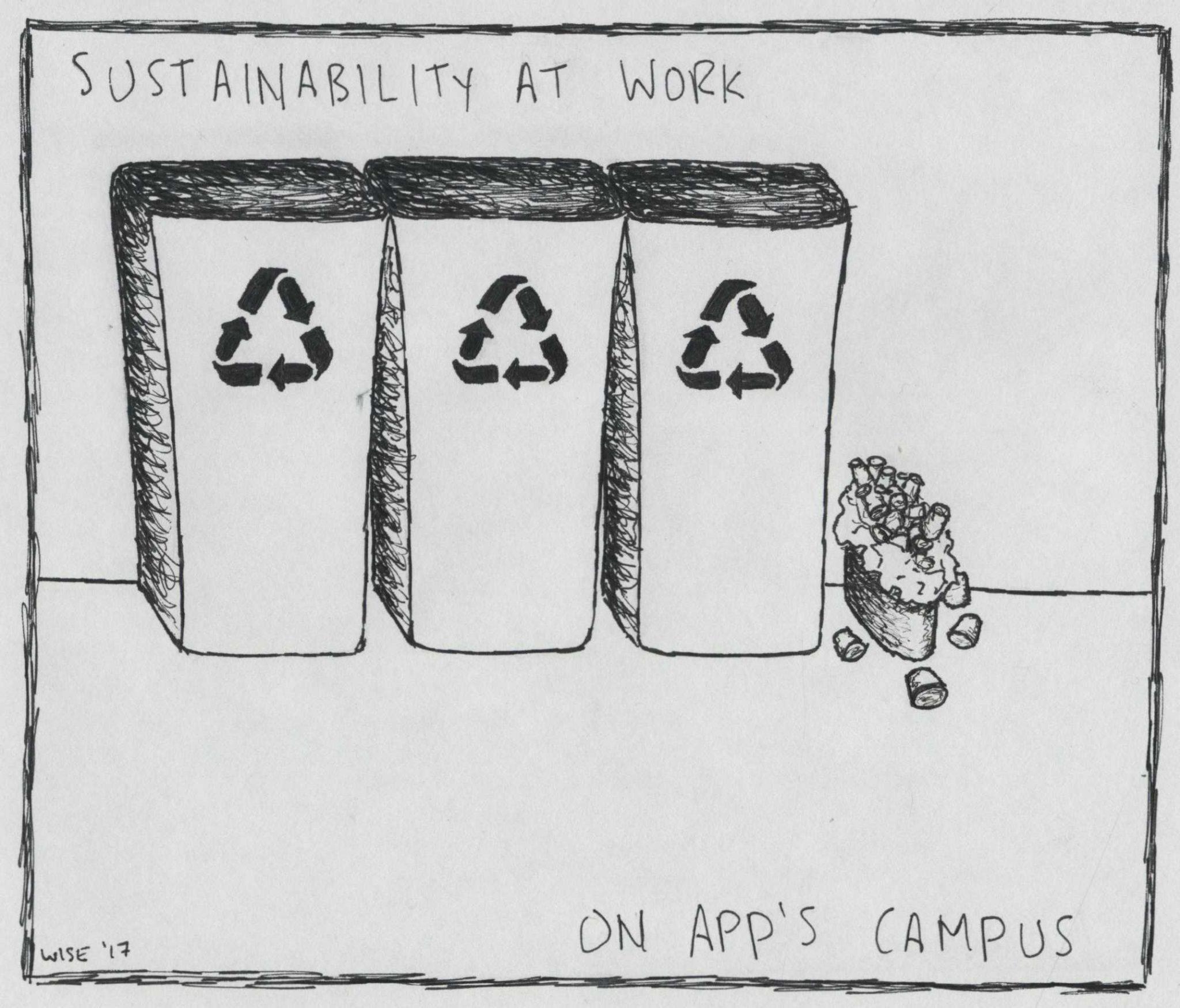 According to the Office of Sustainable Development, Appalachian State earned a 77.5 out of 85 in the Sustainability Tracking Assessment & Rating System. Then in 2015, the university won the Climate Leadership Award by offering 876 courses with some aspect of sustainability and purchasing 20 percent of its food from local food producers.

However, no campus can be 100 percent sustainable as there is always room for improvement.

Roess Dining Hall’s use of non-recyclable paper cups is one of the issues that is raising several concerns about Appalachian State’s true sustainability efforts.

The environment-costly paper cups are a direct contradiction of the university’s zero waste commitment found on the school’s website.

While Trivette Hall has already made the progressive step of purchasing reusable cups, the much larger Roess Dining Hall still only offers paper cups.

To some, paper cups may not seem to pose a large threat to the environment. However, the sheer number of cups is alarming.

According to Food Services, as part of their contract with Pepsi, the university receives 715,000 white, black and yellow cups that have “Appalachian State
University” written on them.

What is most concerning about this obscene amount of cups is the total waste exported from our campus that these cups contribute to.

According to The Boston Globe, paper cups take over 20 years in a fully sealed landfill to decompose. The growing issue of where people will put all of their waste continues to trial sustainable activists.

Even though North Carolina maintains adequate waste storage, this is largely in part due to the fact that North Carolina is one of the top five exporters of waste behind New York, Maryland, Massachusetts and Ohio, according to an environmental newsletter from North Carolina State University. States willing to accept this trash, primarily South Carolina, Tennessee, Virginia and Georgia, reap an economic reward of $35 a ton.

Exporting waste is just a temporary fix to larger environmental health hazards which do not stop at state lines.

Although Appalachian State receives these paper cups for free as a part of their contract with Pepsi, the external cost still lingers within countless other communities.

External costs can be defined as economic activity negatively impacting an unrelated third party and creating devastating impacts on the natural world. These costs can be found in the production, transportation, consumption or disposal of a product.

According to GreenMatch Company, over 6.5 million trees are cut down annually in order to produce paper cups, while the manufacturing process can produce up to 500 pounds of greenhouse gas emissions annually.

Since these external costs are difficult to calculate and do not have any immediate consequences on the producer or consumer, they are often disregarded or overlooked.

With over 58 billion paper cups used every year in the U.S., any further contributions to this easily avoidable issue are odious.

Appalachian State has done an incredible job maintaining and promoting a sustainable campus by running a successful sustainable development program and making a firm commitment to renewable energy sources. Even though these achievements have earned the university several notable titles, sustainability is a never-ending struggle.

Food Services has already made several steps toward making App’s sustainable development program as environmentally efficient as possible. According to Jennifer Maxwell from the Office of Sustainability, Food Services donated 13,914 pounds of food and composted 360,800 pounds of food waste last year. Although these are tremendous steps in the right direction, I hope to see that this easily resolvable issue is brought to attention.

However, seeing that these cups are free, purchasing plastic reusable cups will most likely not be a priority concern for Food Services at Appalachian State. What this means is that working to fix this problem will fall onto the customers at Roess Dining Hall,
Appalachian State students.

We have the power to solve this issue by simply not using the paper cups and instead using reusable cups that we bring into the dining hall. In doing so, we will take another step toward creating a more environmentally-aware community.

As we all know, the environmental stability problem is not a war that can be solved overnight. Instead it can be interpreted as an elaborate series of small battles fought within communities to take small steps locally that will eventually snowball into larger steps that have more of a global impact.

Nate Fordyce is a freshman communication major from Chicago, Illinois