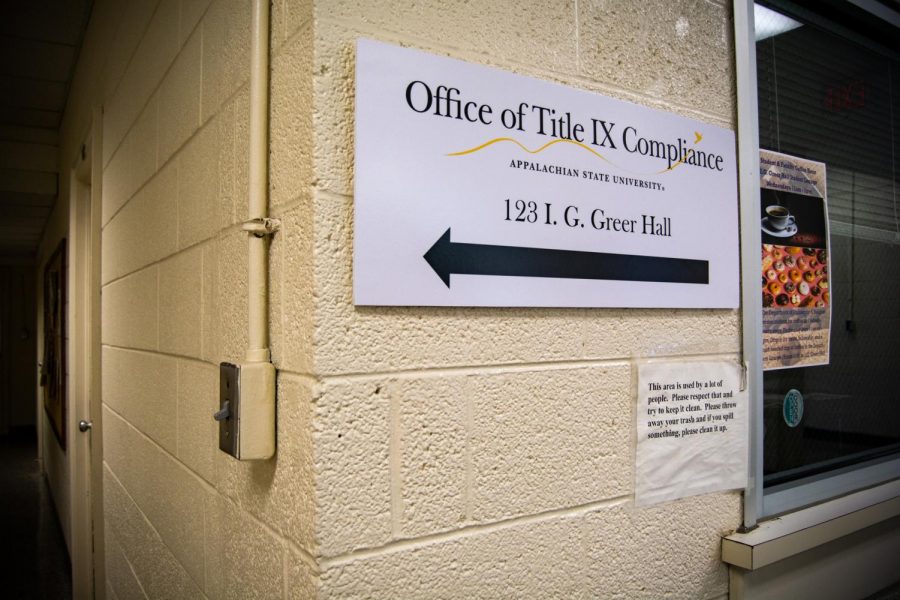 The Office of Title IX Compliance lies in the bottom floor of IG Greer Hall, where they work to uphold Title IX of the Education Amendments of 1972. This prohibits discrimination on the basis of sex in any federally funded education program or activity.

On the bottom floor of IG Greer Hall lies an important, but often unknown resource: the Office of Title IX Compliance.

“What we now primarily focus on is providing resources and support to those who may feel like they’ve experienced harms associated with their sex or gender,” Title IX Coordinator April Baer said.

Baer trains Red Flag Educators to look for signs of interpersonal violence in their peers.

A main goal of the Title IX office is connecting students with resources, like the Counseling Center or App State Police, Baer said.

“We help students who are navigating those concerns to get connected with free counseling on campus to ensure that they have the resources and tools that they need to meet their academic and personal goals,” Baer said.

Baer said the office supports events and organizations in App State’s community when it can like the Women’s Center and the LGBT Center’s Sexual Assault Awareness Month events.

“We really want those offices to be safe places for students, so we are as present and as active there as students feel comfortable,” Baer said. “We don’t want to be in a space and it maybe make someone feel shy to show up; we try to be really conscious about that.”

Bailey Sparks, junior elementary education major, started a project with a friend for a class in the fall called #YouAreNotAlone, which aims to spread awareness about sexual assault at App State and in Watauga County..

Baer and the office have supported the project since its beginning by attending events and providing guidance, Sparks said.

Sparks said she did not know much about Title IX before her project, and she thinks that is the case for many App State students. Despite this, Sparks said she is appreciative of Baer and her office.

“I think it’s great that Appalachian State University has so many resources for survivors of sexual assault, and we’re very lucky to have Dr. Baer and the Title IX office to support students,” Sparks said.

When a student approaches her with a concern, Baer said the Title IX office does a risk assessment to ensure it can prevent the student’s problem from continuing. It also looks at the student’s concerns.

“Are we talking physical, financial, emotional, psychological? What type of harms have they been exposed to? Is their home a safe place? Are there people in their immediate circle of friends that are safe people to talk to?” Baer said.

Baer said the office also encourages students to connect with the Counseling Center and OASIS, a rape crisis and domestic violence resource center in Watauga and Avery counties.

Baer said the office also looks for changes that immediately alleviate concerns for a student in a bad situation, whether that includes a day off from classes, a change in their housing situation or a change in their class schedule.

“Of course we empower anyone to make decisions that serve them well, so if they want to be in connection with local law enforcement about a concern, we are happy to bring officers from University Police to come over to help answer questions,” Baer said.

Baer said the office wants to empower people by sharing information about resources on and off campus.

“It’s our hope that through that process, whatever they have endured can be remedied in some way, and hopefully that student is able to continue to achieve their academic goals at Appalachian, in spite of whatever may have happened,” Baer said.

Baer said the office’s discreet location is an asset.

“If someone were to come into this office, someone might assume, ‘Oh they have an academic class in (IG Greer).’ There is a meeting room upstairs, so maybe they’re here for a meeting, maybe they’re just here to check out an academic department,” Baer said.

Baer said the last thing App State wants as an institution is for students to feel isolated, without hope or help.

“College is hard; growing as a scholar is not easy, and growing as a human is also not easy,” Baer said. “If a student has any concerns, there are so many resources on this campus available to them with the genuine desire to help.”