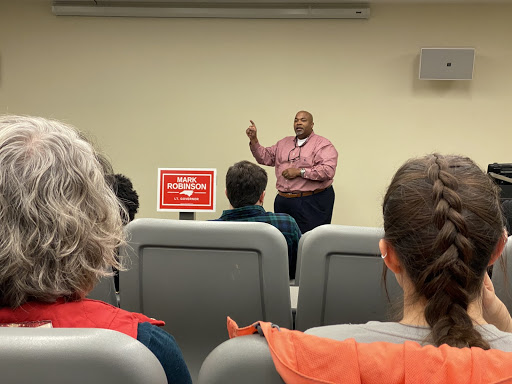 App State’s Turning Point USA hosted Mark Robinson Feb. 18. Robinson is known for a viral video of his speech at a Greensboro City Council meeting regarding canceling a gun show. Robinson is currently a republican candidate for  lieutenant governor in North Carolina.

Robinson was born and raised in Greensboro. His original goal was to become a history professor, he attended UNC-Greensboro.

“I was number 9 of 10 children, born to a black woman in the south, poor as dirt,” Robinson said. “The very first recollection I have as a child are living in a little four room, red and green shingled house that was full of rats.”

Robinson said growing up in that little house taught him what life is really about.

“I learned that the three most important things in life are faith, family and togetherness,” Robinson said. “Because we had those three things, we were able to survive.

Robinson credits his conservatism to his upbringing.

Robinson said he was very politically active at the time, but only through social media.

Robinson attended the city council meeting in 2018. After hearing a few people speak about why the show should be canceled, Robinson decided to sign up to speak.

Without having a speech prepared, Robinson’s moment went viral on YouTube.

Three days after his YouTube video went viral, he was interviewed on Fox and Friends, a conservative talk show on Fox News.

Robinson’s Instagram followers doubled after the interview. With the growth of supporters, Robinson decided to quit his job and school to travel and speak about conservative causes.

After much traveling, Robinson said it was time to do more than just talk about issues. Robinson decided to run for Lt. Governor of North Carolina.

“The most pressing social issue in the nation right now is how we are going to treat the lives of the unborn,” Robinson said.

Robinson said those who support abortion are cosigning onto the murder of innocent children for the cause of convenience.

“We look at children like they’re toys,” Robinson said. “Little dolls that move and breathe, poop and pee, we dress them up, but that’s a person.”

Robinson said the issues involving the Second Amendment is another topic he’d like to work on.

Robinson said the Second Amendment is in the Bill of Rights to protect citizens from a Constitutional Republic.

Robinson said another issue he hopes to tackle is education.

“The number one thing we need to bring back to grades 1 through 12 is discipline and order,” Robinson said.

Robinson said classrooms should display a strict set of guidelines of what will and won’t be tolerated.

“We are no longer educating, we are indoctrinating,” Robinson said.

Robinson said students need to be taught how to be politically informed.

Robinson said students need to have an elementary base of education that includes, reading, writing and mathematics.

“Education will probably be my biggest fight,” Robinson said. “The left has a stranglehold on education because it’s one of their primary targets.”

Robinson said he also wants to focus on veterans and law enforcement.

“I want to see North Carolina do better by their veterans,” Robinson said.

Robinson said because the government pays for training and equipment for people to go to combat, the government should also pay for any expenses when they return home.

“I want you to remember that we live in a Constitutional Republic, we don’t live in a democracy,” Robinson said. “Our founding fathers would cringe at the word ‘democracy.’”

Robinson said the most important thing that drives a Republic is responsibility.

“You want this republic to stay strong? You want your freedom preserved for you, and your children, and your grandchildren and their children? Then you have to be responsible,”  Robinson said. “You have to be politically aware, politically active and unafraid to stand up and tell the truth.”