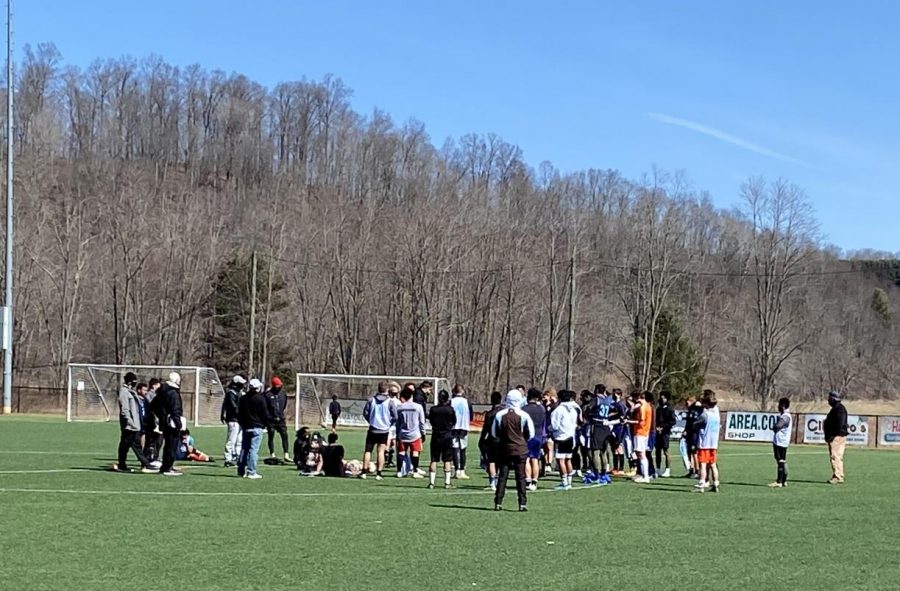 Nearly 40 soccer players came out on Saturday to try out for a spot on Appalachian FC's final roster at the Ted Mackorell Soccer Complex in Boone. “I am very excited this team was made, I always knew we had potential around here,” said Juan Rodriguez, a Boone local who tried out for the team.

“It was awesome to finally be out here,” head coach Dale Parker said. ”When you do it from afar, the recruiting from your laptop can get a little bit old and tiresome, but being out here, seeing the stadium, meeting all the backroom staff, being face-to-face with the assistant coaches was great.”

Appalachian FC technical director and former longtime App State men’s soccer coach Art Rex was among the many backroom staff present for recruitment at the tryouts.

“I was surprised that we had the number that we had, but it was a good representation to see a lot of the local talent that is out there,” Rex said.

Nearly 40 people from all different backgrounds tried out, traveling from different states to try to make the squad for the inaugural season.

“A nice mix of local talent, which is very pleasing. Some good, young college players and some older guys that have been around the game a long time,” Parker said. “I think it’s a very good mix, I was pleased with what we saw.”

Juan Rodriguez, a Boone local, tried out for the team.

“I enjoyed it, everything was well controlled and well organized, and everyone knew what to do,” Rodriguez said. “I am very excited this team was made, I always knew we had potential around here.”

Logan Brown, a 16-year-old goalkeeper from Spartanburg, South Carolina also tried out for the club.

“My keeper coach works for the head coach at Lander University, and he told me of the tryouts,” Brown said. “I think I did really well, I didn’t feel nervous at all.”

Five to 10 players will make the squad from the tryout, according to Parker, with the final squad coming somewhere between 24 to 26 players.

Former App State captain and forward Juan Hernandez, 2019 Sun Belt Defensive Player of the Year Zeiko Harris, and former App State goalkeeper Nick Buchholz joined Appalachian FC, continuing to represent the black and gold. However, they may not be the only former App State players returning.

“There are a couple more in the works, (we) won’t announce anything yet until it’s over the line. We’re hoping to bring one or two more, if there are more than that, that’s great,” Parker said. “The more Appalachian State players we can get back, it’s going to help the squad really knit together.”

Appalachian FC will host its second and final tryout on April 3, giving local players who weren’t able to register the first time a second chance to be scouted by the club.

“(At the) second trial, we’re going to have some players from this tryout we want to call again,” Parker said. “The second tryout is starting to fill out, so there’s going to be new players.”

The schedule for Appalachian FC’s inaugural will be announced in the next two weeks, according to Parker. The National Premier Soccer League traditionally begins their season in May, playing games throughout the summer, with qualifying teams continuing in the playoffs in July and August.