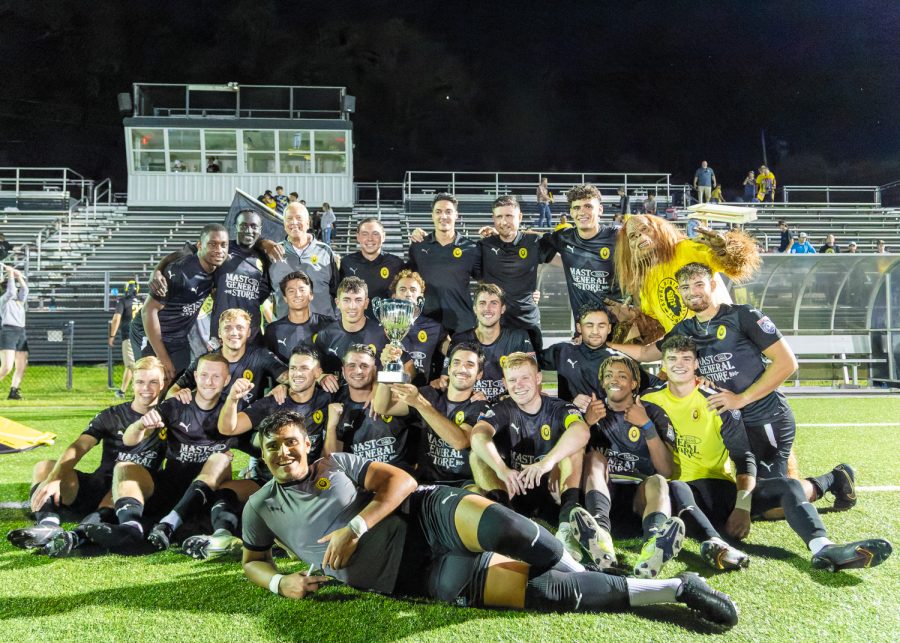 Appalachian FC poses with the NPSL Southeast Conference Championship trophy following its 6-2 victory in the final.

“To win the championship in year two is such an amazing feeling,” head coach Dale Parker said. “It’s just a testament of what we are capable of doing here in Boone and what this club is capable of here in the near future.”

Appalachian FC finished in first place in the regular season of the Southeast Conference, allowing them to host both playoff games.

The final was a goalfest, with three goals scored in the span of 10 minutes in the first half. Appalachian FC took the lead in the 22nd minute with striker Angelo Fabricio scoring the first goal of the match. Left back Charlie Curtis received the ball inside the left-hand side of the penalty box. Curtis found Fabricio, who lost his defender and scored the opening goal.

North Alabama quickly responded with an equalizer just four minutes later. A set-piece off a free-kick landed to unmarked Alabama forward Connor Young, who scored into an empty net.

However, Appalachian FC regained its lead three minutes later. A throw-in landed to Fabricio on the edge of the penalty area, who found his striking partner Kevin de Lange to give Appalachian FC a 2-1 lead.

Ten minutes passed and de Lange secured his brace, scoring his second goal of the night. The striker went through on goal after he dribbled past the North Alabama defensive line and scored off a left-footed strike, ending the first half with 3-1 lead.

North Alabama pushed hard to get back into the game, but Appalachian FC’s quick transitioning from defense to offense was the difference in the second half.

It took just 10 seconds off a counter attack for Appalachian FC to score its fourth goal in the 56th minute. A defensive clearance landed to de Lange at the halfway line, who perfectly headed the ball past the North Alabama defense. Fabricio received the ball, glided past the defense and chipped the ball over the keeper to make it 4-1.

North Alabama keeper Calum Langdale made a crucial error in the 71st minute, giving Appalachian FC its fifth goal. Langdale misplaced his pass off the goal kick and Fabricio arrived at the end of it. Fabricio took advantage of the opportunity to extend the scoreline to 5-1 while completing his hat-trick.

The visitors were able to snatch their second goal of the night after a through ball landed with Patrick Guffey, and the North Alabama defender scored in the 85th minute to cut the deficit to three goals.

Appalachian FC showed no mercy, with an instant ball over the top landing to striker Max Bolton who scored off a sliding shot to end the game.

The strikeforce made the difference for Appalachian FC in the playoffs, scoring 10 goals in two games.

“The firepower that we have with Angelo, Camden, de Lange and Max Bolton, all renowned goalscorers, all players who can win you a game,” Parker said. “Yes we have to defend, keep clean sheets, but scoring six goals in a championship game, that’s going to give you a big chance.”

Six goals were scored in Appalachian FC’s 6-2 final victory as striker Fabricio took part in four of those goals, scoring a hat-trick and an assist. Parker said the day before the game that Fabricio jokingly said he would score a hat-trick in the final, and the forward did just that.
“Since last year, I wanted to come back and prove that we are the best team in this conference, and today, 6-2, we proved that,” Fabricio said. “I was thinking of this game since last year. I was sure I was scoring goals tonight.”

The soccer community in Boone suffered a huge loss in 2020 after App State cut its men’s soccer program. Two years later, Boone is now home of the NPSL Southeast Conference Champions, filling the gap that was left in the community.

“It’s a great feeling to reward the fans in this community after having to go through what they went through after losing the men’s soccer program here at App State,” Parker said. “My number one goal when I came here was to win, build ties to the community and fill the gap that was taken away.”