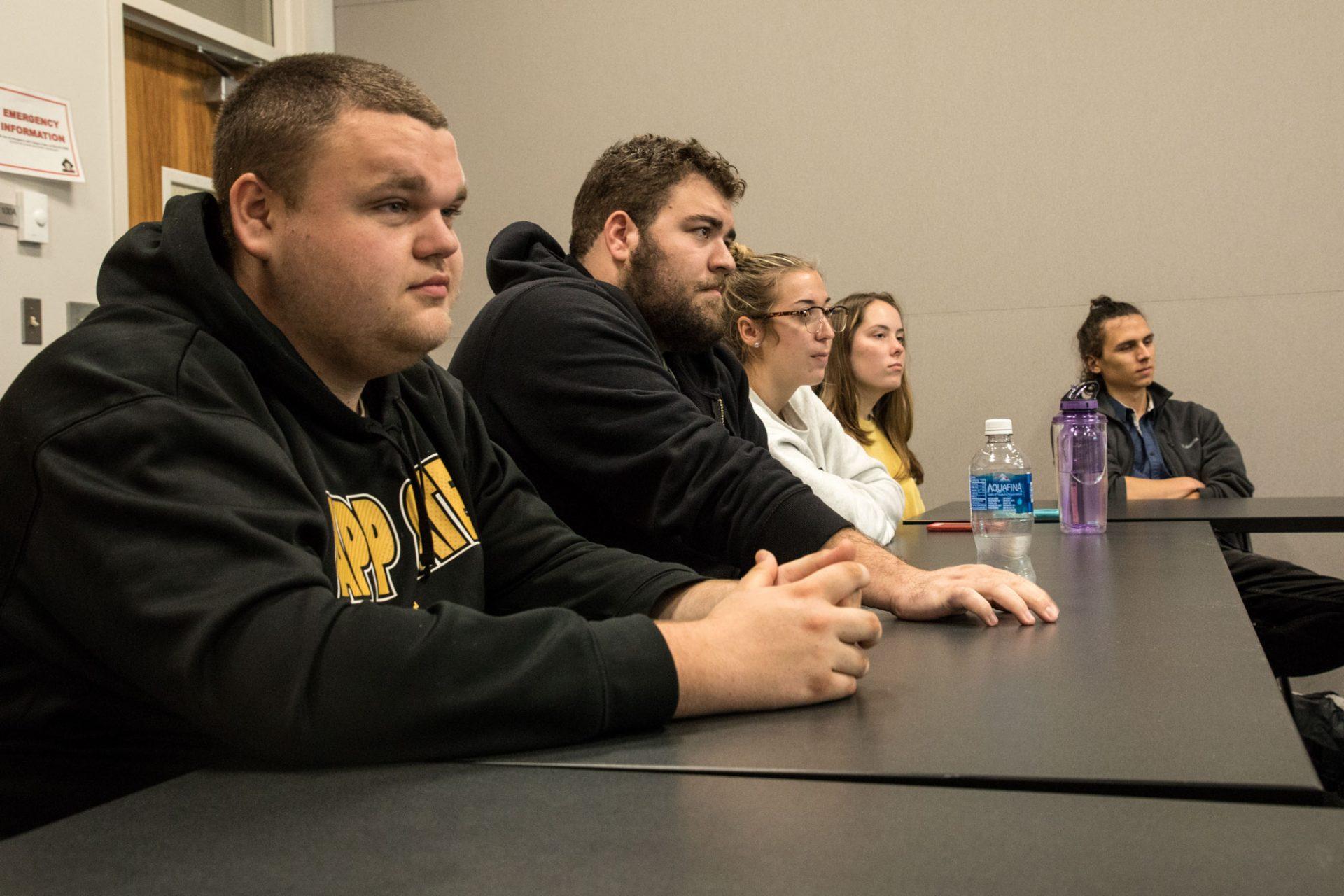 Members of the Appalachian Film Club discuss their goals for the semester on Tuesday, September 12. The meeting was located in New River Room.

There’s a club on campus that is wide open to any student, regardless of major or year. Dues are only $10 and they go toward snacks and props. All they ask is for the desire to create something. It is the Appalachian Film Club.

In case the name of the club wasn’t clear, the Appalachian Film Club makes films. They go through the entire production process from an idea, to script writing, to acting, to editing the final product and sharing it for people to see.

Pre-production consists of scriptwriting and planning out the project, which can take a few weeks. After that’s through, they move to the production stage, where the actors bring the script to life and the videographers capture the story with cameras. Then they move to the post-production process, where they edit the footage down to their final product, which they share on Facebook and YouTube.

Club members make the most of what resources are available to them. Some members have their own cameras, but the rest of them can check out cameras, tripods and microphone equipment in the lower level of the library.

“I’ve told a lot of people that are in [the club] and also just interested in film, is that the best camera is the one that you have on you,” Thomas Fore, president of the Appalachian Film Club, said. “So even your phone can be your best camera.”

Fore is a junior criminal justice major, but film has always been his hobby. Before joining the club last year, he said he wanted to create something, but didn’t have any friends who were interested. Then he joined the club and started sharing his ideas, and suddenly he had people that wanted to create, too.

“If you’ve ever wanted to express yourself creatively, this is the place to do that,” Fore said. “If you’ve ever had something that you wanted to show the world, or at least campus, this is somewhere you can do that.”

The projects the Appalachian Film Club makes depend on what members want to do. Past works have ranged from a two-minute political parody to a piece that took an entire semester to make. A big part of Film Club is being able to ask club members to help with a project, and they’ll volunteer. Club members have a wide spectrum of talents, from the actors that express themselves in front of the camera to the screenwriters and editors that express themselves behind the lens.

“We want to welcome people and we want to make them feel at home, and help them expand their interests and love for film, and acting and writing,” Cali O’Mailia, senior English major and secretary of the club, said.

It’s not too late to join. “We are always open to welcome new members!” O’Mailia said. “I love this group so much. We’ve created a lot of amazing friendships and a lot of funny stories.”

In addition to his role as club treasurer, Nick Linnehan, a senior English major, said, “I find that it is my obligation to assist novice filmmakers in any way that I can.”

Linnehan specializes in creative writing and lends his talents to the screenwriting and directing parts of the production process.

“I would have to say that the best part of film club would have to be making new acquaintances and friendships as we all work together on projects,” Linnehan said. “A lot of us strive to have new projects to display on our portfolios, but more importantly we strive to have fun during the production process rather than stress over something we all love.”

The club hasn’t picked a date yet, but at some point this year they are looking to host another 36 Hour Film Festival. The festival pushes movie lovers to write and edit a film all in 36 hours. At the end of last year’s festival, the participants took over the Greenbriar Theater for the night to watch and celebrate the premiere of all their hard work. The festival was an open call, so anyone could participate. Film lovers should keep an eye out for the festival announcement later in the year.

If students want to learn more about what the Appalachian Film Club is up to, or see their work, check out their Facebook page and YouTube channel. Club meetings are on Tuesday nights at 6:15 p.m.