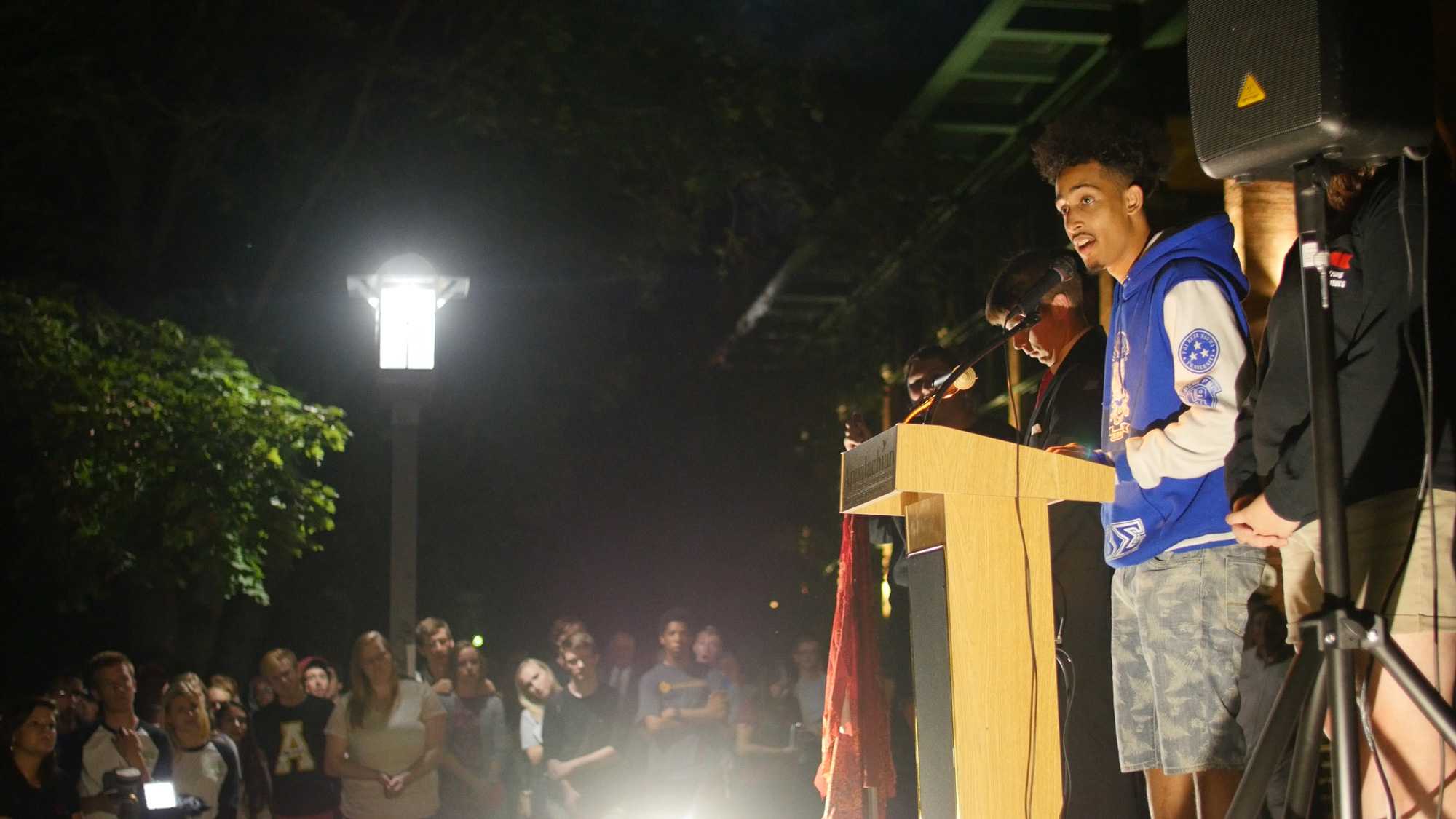 SGA President, Jalyn Howard, speaks about who he walks for during this year's Walk for Awareness. Photo by Maleek Loyd

Appalachian State’s 27th annual Walk for Awareness was held last Tuesday in cooperation with the Red Flag Campaign and was designed to raise awareness about interpersonal violence in the community. Over 700 students participated in the walk.

The walk, which began in 1990, was started to honor two Appalachian students.

The walk originated as a way of remembering the events of that September, but has since grown to have a broader message. Featured speaker Lauren White Marvel said it is meant to recognize all victims of interpersonal violence, and let them know that “we walk with you.”

The walk was prefaced by some live music and a screening of a documentary-style TV episode explaining the events that led to the event’s beginning. The event began with short speeches from Chancellor Everts and John Weaver, longtime track and cross country director.

Chancellor Everts spoke briefly on the event’s significance to the Appalachian community.  Weaver spoke on the event’s history, specifically relating to Leigh Cooper, who was a runner for App State’s distance program. After the events of September 1989, Leigh Cooper became a vocal advocate against sexual violence, speaking at the Walk for Awareness each year before dying of pneumonia in 2012.

The walk itself went from Sanford Mall to the Schaefer Center, a silent column of hundreds of Appalachian students walking in honor of those affected by violence.

Featured speaker Lauren Marvel spoke to the walkers upon their arrival. She described how her own career was shaped by dealing with interpersonal violence as a resident advisor at Appalachian.

Marvel was an RA her sophomore year at Appalachian, and said that year one of the students on her floor was a victim of sexual assault.

Marvel went on to become involved with both the Red Flag Campaign and OASIS, a women’s shelter at App State. In her work now as a prosecutor, she focuses primarily on helping victims of sexual violence find justice.

Marvel said she aims to move the Appalachian community from awareness to action.

“It’s not enough to see tragedy, acknowledge it and then get back to our lives,” Marvel said. “If we’re not a part of the solution, we’re a part of the problem.”

Below are some links to resources available to Appalachian students in need of help.