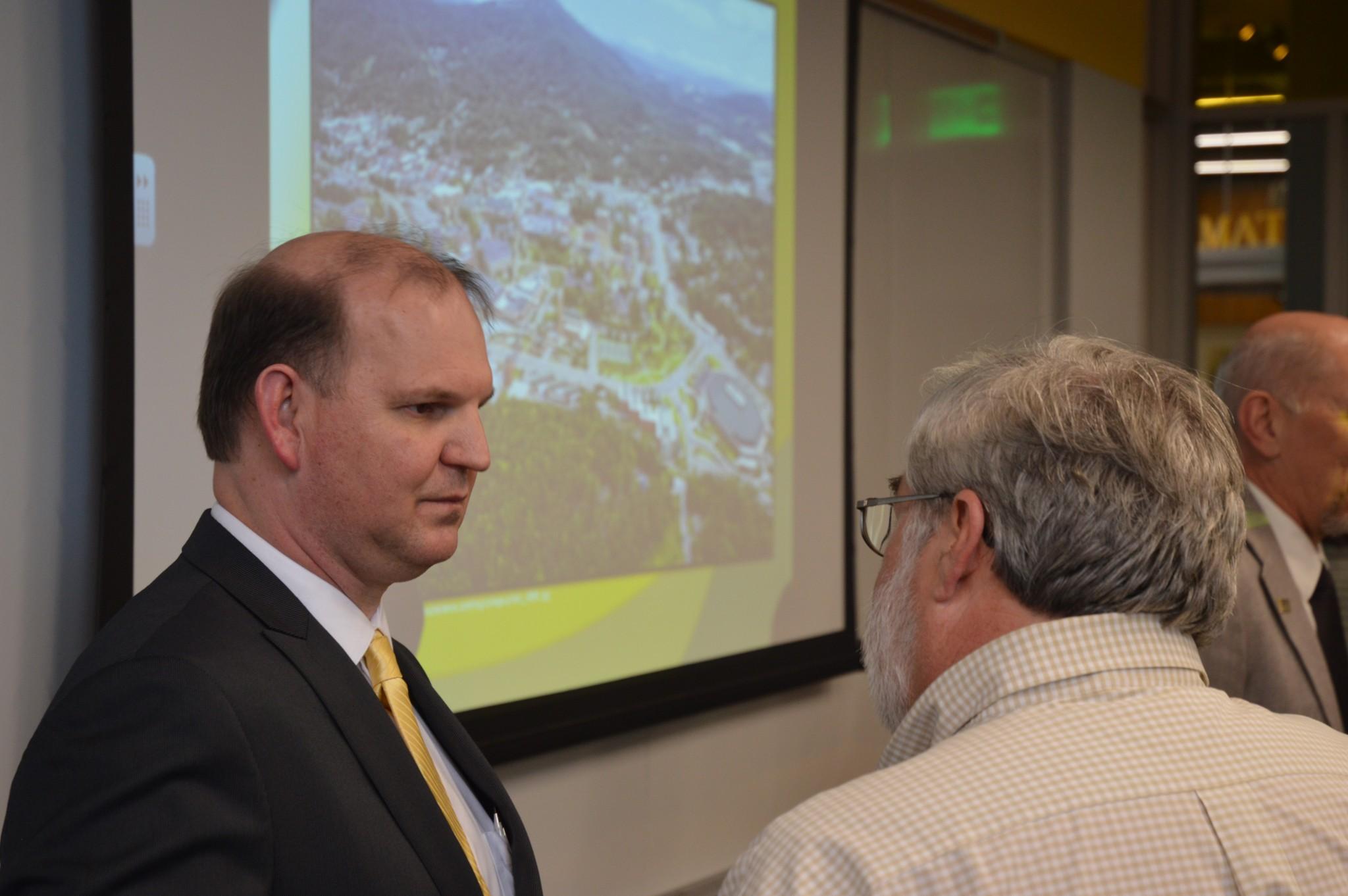 The three finalists looking to fill the vacant Provost and Executive Vice Chancellor position at Appalachian State University participated in open forums as part of their two-day, on-campus visits and interviews.

The position opened up after former Appalachian Provost Lori Gonzalez stepped down Sept. 30 to assume the role of special assistant to the chancellor, according to a university email. Stan Aeschleman is currently serving in the position on an interim basis while the national search and interviews are conducted by the Provost Search Committee.

The committee consists of 17 members, which include faculty, staff, administration and one student. Chancellor Sheri N. Everts announced the members of the committee Oct. 10, 2014, with Bill Pelto, Dean of the Hayes School of Music, serving as the chairman, according to chancellor.appstate.edu.

The finalists’ names were released to campus March 2. Now that all three on-campus visits and interviews have concluded, the committee will forward its observations to Everts for a final decision.

On their respective dates, each of the candidates spoke for approximately 30 minutes, discussing their background in higher education as well as their observations of Appalachian and how they would fit in, before fielding questions from their respective audiences.

Darrell Kruger, Dean of the College of Education and Human Development at the University of New Orleans in New Orleans, Louisiana, spoke March 16.

A central theme throughout Kruger’s presentation was the South African philosophy of Ubuntu, which he calls one of his core values. Kruger is a native of South Africa.

The philosophy, Kruger said, postulates that humanity is connected and people can only be human beings through civil interaction with others.

Kruger continued that as a chief academic officer, the ability to understand those different languages – both literally and metaphorically – would be a strength he would bring to Appalachian.

“We can disagree on things, but how we disagree is very important,” Kruger said.

A first-generation college student himself, Kruger said it is necessary to reach back in the pipeline of families and communities to attain and increase student diversity on campus. Part of this includes getting both students and their parents on campus, ideally.

“If you reach back in the pipeline and get parents and students engaged, then parents can see [college] is accessible,” he said. “There’s ways to pay for it through federal financial aid, there’s merit opportunities as well.”

Concerning an increase and attainment of faculty and staff diversity on campus, Kruger said the university should act as a family and take the time to get to know one another better through becoming a welcoming place to visit and work.

Kruger focused on three points when describing his background: being a boundary-spanner, his engagement in stakeholder collaboration and his college and central administration experience.

“I think for someone who is going to be the chief academic officer, you need to be able to have an understanding for the breadth of academic disciplines,” Kruger said, “and given that I’ve been tenured in two separate colleges, I understand the faculty’s need to be able to balance teaching, scholarship and service, as well as understanding the various ways we write about the world and teach about the world.”

In his history of working with stakeholders in Washington, D.C., and donors to his college at the University of New Orleans, Kruger said he’s learned that promotion of faculty initiatives and student learning is something that would serve him well as a provost.

“As provost, knowing the issues that deans and chairs have as they bring initiatives forward will enable me to understand those probably more intimately,” Krueger said.

Scott Furlong, Dean of the College of Liberal Arts and Sciences at the University of Wisconsin-Green Bay, spoke about the things he will be implementing if chosen for the position of provost and executive vice chancellor on March 19.

Furlong said for the past 10 years he has been looking at what Appalachian has done in experience programs, assessment and general education.

In the past, Furlong has developed a first-year experience program, a first-year seminar program, a new general education and implemented a new collaborative program on engineer and technology with 11 other campuses in the Northeast Wisconsin area, as well as served in various leadership positions ranging from chair of the environmental affairs department to dean at Green Bay.

Furlong said he is committed to public education, the mission of the comprehensive university, student engagement, the things happening inside and outside the classroom and faculty development.

“I think that in a community like Boone where the community and people on campus are so intricately linked, what you’re doing in the context of the arts, working with nonprofits, bringing students to campus that would not necessarily think about going to a campus is extremely important in what we need to be about as a public comprehensive institution,” Furlong said.

A focus of Furlong’s, in reference to the UNC Strategic Plan and Appalachian’s, will be impacting the lives of first-generation college students and increasing diversity and sustainability in more than just the operational and efficiency sense. Furlong said sustainability includes the environmental, sustaining communities and social justice issues.

“We have a role as public educators not only to do what we can in terms of what our state and legislators want us to do, but we have other public activities that we have to be concerned about as well,” Furlong said. “Some of that deals with public citizenry, promoting a democracy and what role we play in the community.”

The series of forums concluded on Monday with Karen Schmaling, psychology professor and former vice chancellor of academic affairs at Washington State University.

“I have certainly assumed positions where there was a real mandate, a call to facilitate change,” Schmaling said. “My sense [of Appalachian] is that it’s really around sustaining momentum and exceeding excellence more than facilitating specific changes.”

Schmaling said following both the UNC Strategic Plan and the Appalachian Strategic Plan is important, but there should also be a place for ideas that allows for a more forward-looking vision.

During the forum, Schmaling touched upon the topic of diversity at Appalachian. She said Appalachian has been focusing on increasing the amount of students of color, but she believes doing so works in collaboration with also increasing faculty of color.

Schmaling suggests changing the language in advertisements for the university, hiring faculty with degree requirements, asking for teaching experience and asking how they are going to advance diversity in various ways such as in the curriculum or faculty research.

“I think it sends out a message of how diversity is a priority at the institution,” Schmaling said.

Something that Schmaling said she would begin to work on as provost and executive vice chancellor is branching out and working more on the marketing aspect of Appalachian so what is being done at the university is made known to other institutions across the state and country.

“There’s [recognitions that Appalachian has] that should make anybody a little bit more curious about what you are doing there, what’s going on there,” Schmaling said. “There are people whose job this is, so people in marketing and communications are going to be so helpful and I think telling the story is right along for the folks in development and university advancement.”

Schmaling said academics is also an aspect of the university that is not good at self promotion, but should do so. She said Appalachian has a lot of things going on that it may be overwhelming to get the word out and it will require asking for help from other expertise.