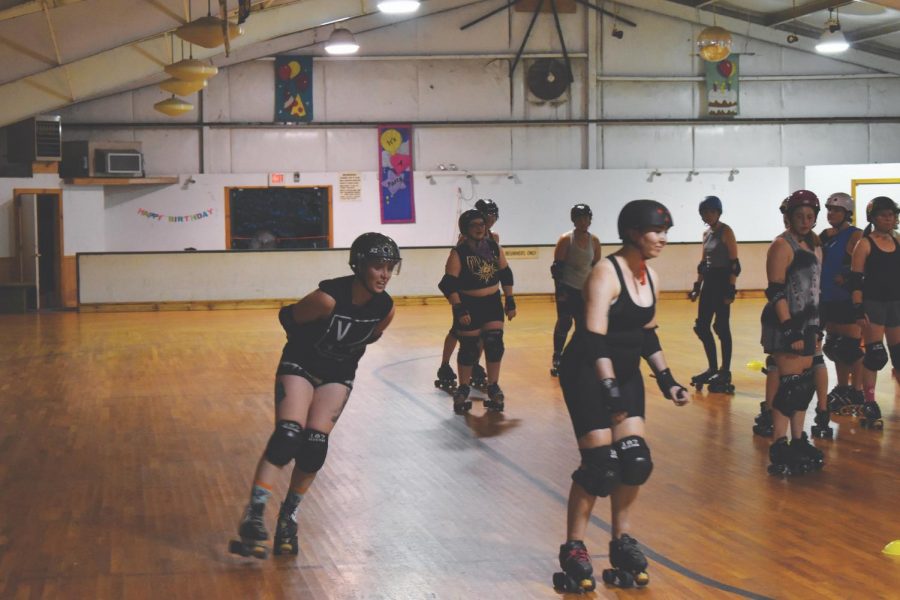 Members of the Appalachian Roller Derby skate around during a recent practice session.

For Rebecca Tobiassen, roller derby is worth all the bruises the physical nature of the game causes.

“I would say it changed my life, really,” Tobiassen said. “I’m a mom of two, and so, it’s really great to have the team. You become friends with them, and it’s just a great release, all the physicality. I need it to help keep me sane.”

Appalachian Roller Derby is “an 18+ all-female, skater-run flat track roller derby league based in Boone,” according to its website.

The team started in 2010 after an App State student made a post to Facebook about creating a team. Tobiassen, or “Bam Bam Becca” on the derby track, is starting her third season with the team and has become close with many of her teammates through all the work they put in together.

“You work out with them outside of practice; you end up talking about your lives in general,” Tobiassen said. “The losing, and the winning, and just constantly practicing with them, and spending time with them. We all work at it together.”

Junior biology major Shannon Pate, or “Strawberry Burn,” said how important the team is to her and what it adds to her life.

“I’ve gained supportive friends that are there for whatever you need,” Pate said. “I’ve gained positive role models and sources of positive energy.”

“They’ve given me a second family that I know I can be around and not be judged,” Armstrong said.

Both teams practice and play at the Youth Outreach Skating Rink in West Jefferson.

“Sometimes you’re able to do it with sheer speed and talent just by kind of flying through around the outside,” Tobiassen said. “But, generally, it’s pretty physical.”

Games consist of two 30-minute halves and an overtime period if the score is tied.

“We are required to wear helmets, mouthguards, wrist guards, elbow pads, knee pads and then you can wear whatever equipment other places,” Tobiassen said.

The ARD hosted its annual boot camp on Aug. 25 and is gearing up for its upcoming season. The schedule has not been released.

“It’s a great sport; it gives you a great workout, and we try to be as welcoming and open to all different sorts of people. It’s just a great thing to do,” Tobiassen said.