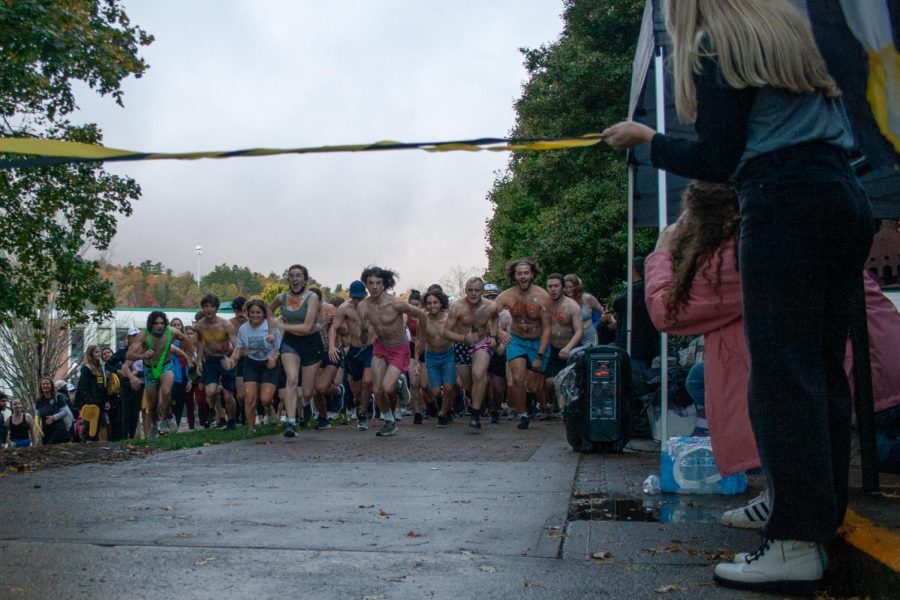 Participants in the Neerly Naked Mile take off, beginning their loop around campus, going past East Hall, through Durham Park, along Rivers Street, and past Edwin Duncan back up toward Plemmons Student Union.

After an unexpected storm hit Boone, not even the rain and winds could stop the dedication and energy of Homecoming Week, especially for one event that had several people in their underwear.

The Appalachian Student Ambassadors hosted the eighth annual Neerly Naked Mile Oct. 25. Ambassadors host this event every year for homecoming to raise awareness of home-insecure people and prep communities for the cold in Boone. Participants either walk or run a mile around App State’s campus dressed in as little clothing as possible.

To qualify for the race, participants had to register on Engage or donate winter clothing or blankets that were donated directly to Hospitality House from Ambassadors.

“Personally this is something I’ve been working on for a while and it’s exciting to see it actually happening,” said Gracie Ziegelmann, Neerly Naked Mile coordinator.

Ziegelmann also said it’s exciting to see Neerly Naked Mile actually happening and to see homecoming being back in full swing on campus.

Stanbery said the Neerly Naked Mile was a fun kickoff for homecoming and helped bring more recognition to clubs as well.

Ben Negin, a sophomore participant, said they believed the mile is a really great cause and believes it’s a part that students can do to help out.

Around 250 people registered for the event and a total of 350 warm clothing and blankets were donated, according to Ambassadors.

Todd Carter, chief of the Hospitality House, said this was the biggest crowd for Neerly Naked Mile he has ever seen.

Last year’s event was hosted virtually due to COVID-19. Attendees were able to donate through Venmo or participate at a safe distance from other people, such as going on a walk or run in a local park, Stanberry said.

“It’s nice that we’re able to do it outside, and it makes me feel comfortable being here,” said Ambassador Dalton Akos.

To make the race more competitive, Ambassadors gave the first 100 participants that finished the race a goody bag.

After less than 10 minutes into the race, Will Evans was the first to finish the mile.

“It felt really good, and I have been training for weeks to win this race,”said Evans, junior marketing major.

Evans has been waiting for the race since last year when it was held virtually due to the pandemic.

“It’s a long process, but it’s so worth it in the end,” Hawkins said.

For many students whose first homecoming was last year and who missed out on normal festivities because of COVID-19, this was the first time they’ve been able to celebrate with in-person activities.

“It’s been exciting. I also love Halloween, so I’m really excited about all of the stuff that’s going on,” said Hannah Cummings, sophomore nursing major. “And I got a huge pumpkin, so that’s awesome.”

APPS partnered with App Builds a Home, a campus-wide partnership with Habitat for Humanity for homecoming this year. Every year, the group works to build a home by raising funds and providing volunteers, said senior Mackenzie Millett.

“We did host a homecoming competition for clubs and organizations on campus for homecoming,” Millett said. “It was build a 3D model home out of any household item you have.”