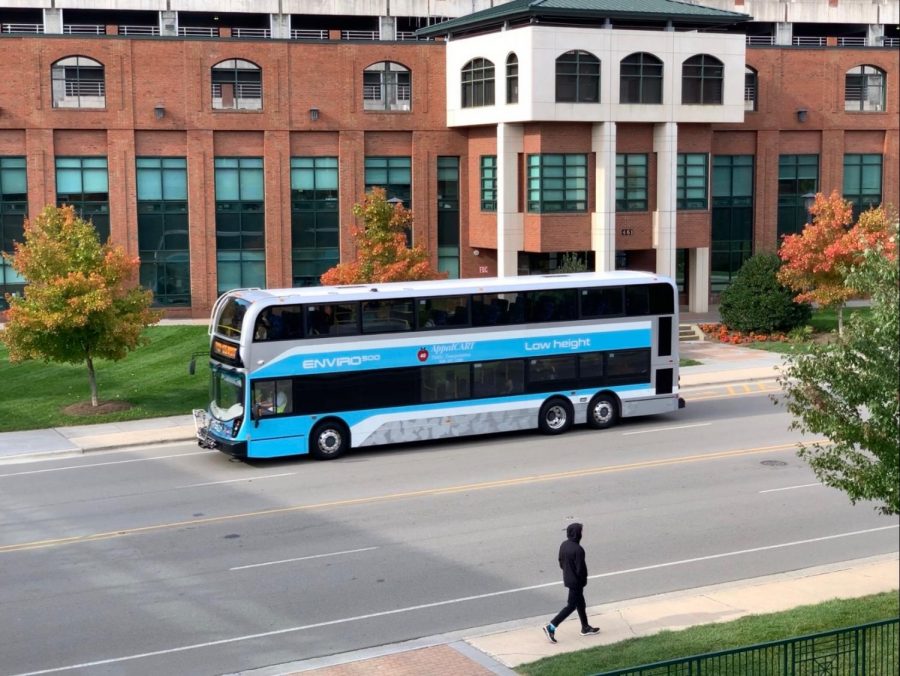 The AppalCart Pop 105 route will feature a double-decker bus until Oct. 15.

A double-decker bus isn’t something people expect to see when they come to Boone, but AppalCart will put the town on the map for it nonetheless.

AppalCart introduced the two-story bus by Alexander Dennis Limited to the town Wednesday on the Pop 105 Bus 2 route in hopes of decongesting the bus’ common overcrowding.

ADL is a British bus manufacturer company with buses across “the UK, Ireland, Europe, Hong Kong, Singapore, New Zealand, Mexico, Canada and the United States,” according to their website.

There is a trial for the bus until Oct. 15 to see how it can handle the town’s roads, according to AppalCart Director Craig Hughes.

“One route I drove, I had 86 passengers on that route, and there was still lots of room for everybody,” Hughes said. “Which is important because you want to try to social distance these days and so we’ve got the space on there.”

Currently, passengers on AppalCart buses are required to wear face masks, there are sanitizer stations on each bus and each driver is screened prior to their shift to ensure COVID-19 protocols, according to AppalCart’s website.

A typical Pop 105 AppalCart bus can hold about 70 passengers before it gets uncomfortable, Hughes said. The double-decker bus has 84 seats before standees, making the bus available to over 100 passengers at a time.

“We just want to see, okay, it’s an option for us. Let’s see what we can do in the future,” Hughes said. “It’s harder to find drivers, and so if we can get the same amount of people in one bus as we can with two. That’s one less driver we have to look for.”

Hughes said AppalCart is using this trial to consider fuel mileage and capacity load as a justification for the price difference of this bus compared to the current AppalCart buses.

A QR code is posted on the bus for passengers to scan and give feedback on their experience.

AppalCart also has a plan to construct an electric bus beginning in January, with the expectation for it to be operating by April. ADL also manufactures options for a double-decker electric bus but it costs about $1.3 million, a price tag Boone isn’t quite ready to consider yet.

“It’s fun for the students, the passengers. It’s a little treat for us I think,” Hughes said. “Again, we just don’t see double deckers in North Carolina or widely used across the United States.”