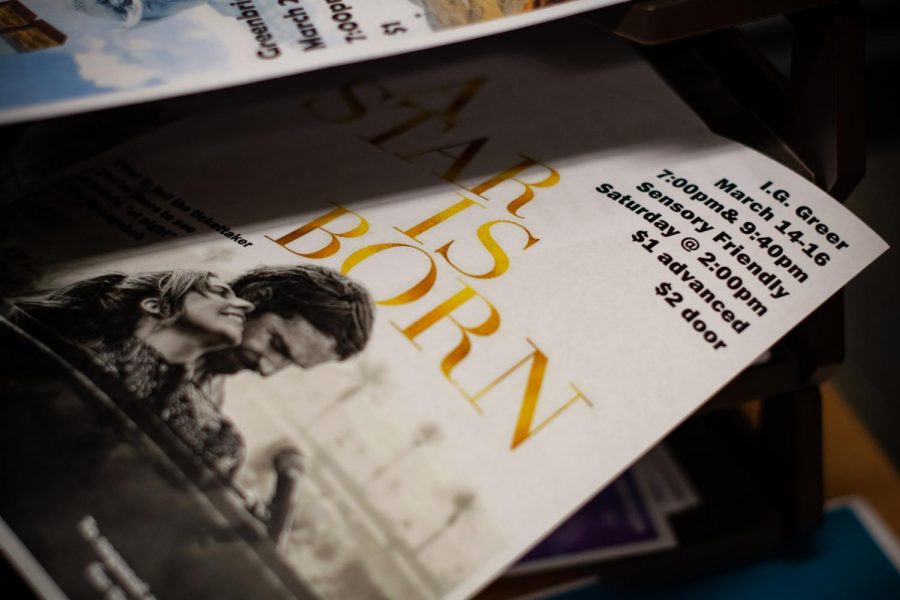 Last Saturday, a sensory-friendly version of A Star is Born was shown at I.G. Greer theater. APPS hosts sensory-friendly movies on a regular basis where lighting and sound are reduced and subtitles are shown.

The modern movie theater experience is typically defined by a blacked-out theater with the sounds of people munching on popcorn, scattered whispers and the movie filling your ears. At  IG Greer theater at 2 p.m. every Saturday, this is not the movie-going experience to expect.

Appalachian Popular Programming Society’s Films council implemented sensory friendly showings. Established about eight years ago, APPS shows movies with different sensory adaptations that accommodate a wider audience, including those who may have different abilities or disabilities that hinder their normal movie-going experience.

During the sensory friendly showings, the lights are dimmed, the volume is turned down and closed captioning is turned on. The audience is allowed to move and talk freely, and viewers can bring outside foods to accommodate dietary restrictions.

“We try to take into account different kinds of sensory aspects and perspectives people have,” senior biology major and Films council chair Taylor Cromer said. “It’s all about accessibility and people being able to feel as comfortable as they can in our theater.”

“I thought there was something that we were missing by limiting the showings only to kid films because that assumes that all the people on our campus would not enjoy films that aren’t PG-rated,” Cromer said. “We wanted to still have that environment with every single one of our films in IG Greer. We want everyone to feel like they can come into that space and have an accessible opportunity to watch any movie.”

Films council was not alone in the process of making sensory friendly viewings possible. Since its development, the council has worked with community partners including the Scholars with Diverse Abilities Program and Parent to Parent.

Cummings said she was part of an initiation that asked the questions, “What was available to App State students, and how do we in the community recognize that all of our students on campus are part of our community, and how do we support them?”

Cummings works with the 10 students in SDAP, a two-year program that allows college-aged students who have intellectual disabilities work toward their education. Cummings teaches two university classes about disabilities, including Autism: A Broad Spectrum and Beyond Normal.

Cummings regularly attends the sensory friendly showings and encourages the students in SDAP and her classes to attend as well.

“There is one family who comes only to the sensory friendly showings and their child does laps around the theater,” Cummings said. “He’ll walk and then suddenly stop and look at the screen and then watch for awhile. He’ll give a little laugh, a hop and a skip, and then he walks some more. I’ve been able to watch how he’s responded over time to the films and how comfortable he’s become in that environment.”

Kaaren Hayes, director of Parent to Parent, has promoted and contributed to APPS’ sensory friendly viewings. Parent to Parent provides “free support, caring connections, information and hope” to families that struggle to find resources for their children. This includes families with children who have disabilities, chronic health conditions, emotional or behavioral problems, families that have had a premature baby or experienced the death of a child.

Parent to Parent has worked in Watauga and surrounding counties for 31 years. In the last 10 years, Parent to Parent has helped make more than 10,000 connections for families that reached out for help. Some of the families were pointed to sensory friendly showings for a source of family entertainment.

“Originally we thought we would be lucky if we got one movie a year to work in this sensory friendly environment,” Hayes said. “If we got two, it would feel like we reached the top of the mountain. In reality, it just caught on. The Films council has done a really great job of sustaining it and letting it grow for even more people to enjoy.”

Both community partners have worked with Films council over the years to keep the discussion about sensory friendly viewings open and look for new ways to accommodate more people.

With discussions of disabilities and accommodations increasing, APPS’ Films council establishing the sensory friendly viewings is a step toward more acknowledgment on campus, Hayes said.

Films council produces a new movie every weekend. Upcoming movies with sensory friendly showings include “On the Basis of Sex,” “Green Book,” “Spider-Man: Into the Spider-Verse,” “Mid90s” and “If Beale Street Could Talk.” Movies are $1 at the ticket desk prior to the showing and $2 at the door.