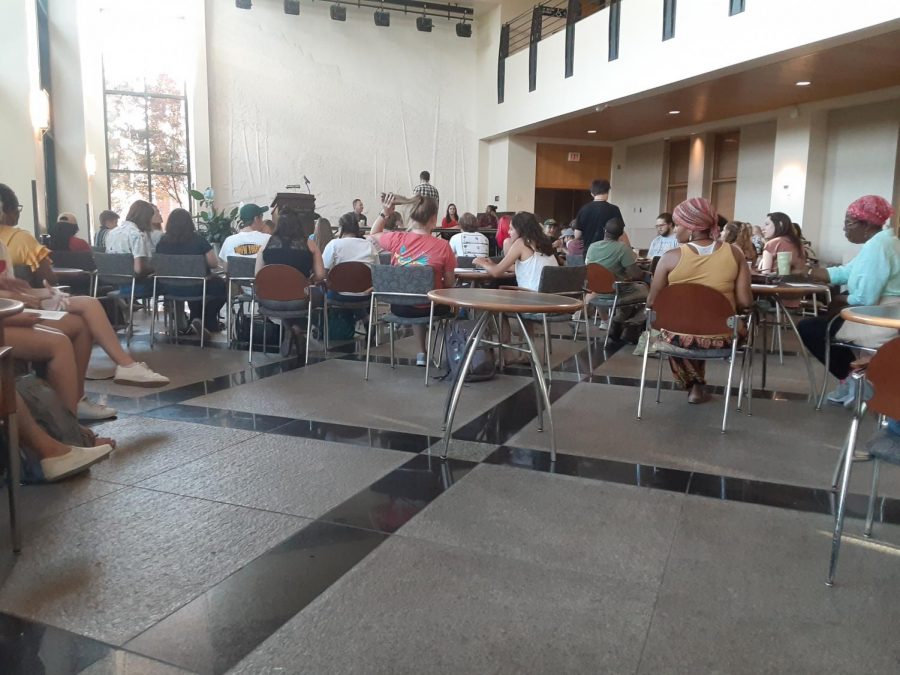 The student organization AppSpeaks hosted an event in the Plemmons Student Union Solarium on Sept. 4 called Appalachian Spoken Traditions. This was the second year the event on storytelling and spoken word was held.

The event began with sophomore electronic media and broadcasting major Michael Edgerton getting the audience comfortable by playing off the microphones’ technical difficulties with relative ease and introducing the first speaker.

Each speaker introduced themselves and were greeted with respectful silence as they proceeded to bare their souls to the audience with written pieces.

Senior English major Lauren Hempen read her poem on discovering love in the hills of Appalachia and her painful experiences of heartbreak. Edgerton followed, sharing a short story titled, “Blood Moon Blues.” Jay Butler, a graduate student, recited his picturesque character poems about an escape artist and briefly mentioned the importance of writing as an outlet. He described it as not only a way of discovering, but also recovering.

Similarly, Anna Muckenfuss, a junior journalism and electronic media and broadcasting double major, spoke about journalism as a form of storytelling by presenting a child’s tale of “The Three Little Pigs” and flipping it into article form⁠—a skill that did not go unappreciated, given the chuckles and applause following her conclusion. She asked the audience to find the positives in the negative stories that may scare or anger them when encounter news.

Jay Phillips, a creative writing major, said “Coming to App has changed the mindset that I enter when I start writing.”

Phillips gave the audience context before reading their poem and open letter to the audience by opening up that they related to the struggles of bipolar disorder and OCD.

The evening concluded with author and keynote speaker Silas House’s speech about how his experiences throughout his life influenced his writing and how important the stories happening around him were.

“I began to write like my life depended on it. I haven’t really stopped,” House said.

House held the audience’s attention by telling a brief tale of his youth in Appalachia and recounting his life experiences, and the influence those experiences had on his books.

House wrote his first book, “Clay’s Quilt” in 1993, saw it published in the early 2000s, and watched it soar to the best-seller list, which established his career as an esteemed author.

House has spoken five times at App State. This was his first time as an AppSpeaks guest speaker.

House met Matthew Richards, the faculty advisor and dialogue coordinator for AppSpeaks, at an Appalachian Studies conference about six months ago. Richards then invited House was invited to speak at the Appalachian Spoken Traditions event.

This was the second year Appalachian Spoken Traditions was held, and Richards said he hopes to host it annually.

“I didn’t know spoken word was a thing until I got here,” Corts said. “It’s awesome to hear so many different stories being told. There’s so much diversity up on that panel, too.”

House said he “loved how unique each of (the student speakers) were, and how different they were. To be their age, to get up there (and) to seem so confident on stage is impressive.”

Richards said he encourages students to come out and not only enjoy the events AppSpeaks hosts, but to take a risk to become a part of them.

“I think these are fantastic spaces for students to express themselves, express their work, to get ideas out,” Richards said. “I want students to use them. If other students have ideas for different events or different mediums, AppSpeaks is a group that is always trying to develop new events, new ideas, so there’s space for that, too.”

Anna Muckenfuss is a member of The Appalachian Editorial Board.