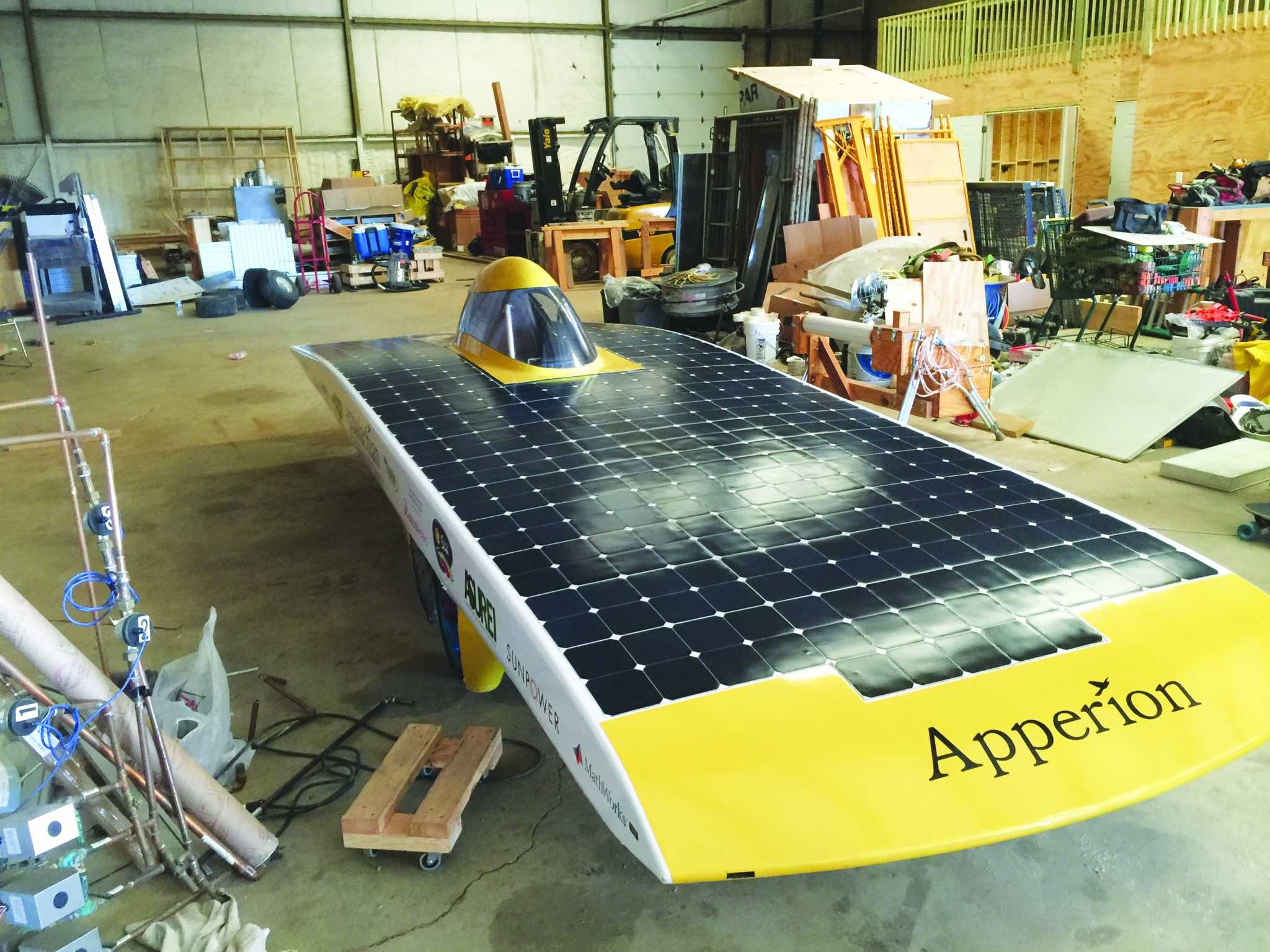 In an unassuming warehouse off U.S. Route 421, a group of diligent students on Appalachian State’s very own Solar Vehicle Team work relentlessly to finish the final draft of their 2016 vehicle design report.

Everyone is working hard to make the draft neat and well put together to show the school’s Office of General Counsel to be able to get insurance approval.

The team is serious about racing in the 2016 American Solar Challenge, a national collegiate race between a variety of colleges.

Since Dan Blakeley started the project in fall 2013, the team has been working to show the school and the community how a solar car can be a sustainable and reliable source of transportation.

Although the project has faculty advisers, it has been student-driven from the start. This makes the project 100 percent student-made, and shows just how much these students care about making a solar car.

The reason driving these students is simple: sustainability.

Sustainability has been a big goal for the university, and a car that runs off nothing but sunlight could be a great project for the school to get involved in.

With the school’s help and backing, the team could go on to the American Solar Challenge and compete among other schools, showing how dedicated Appalachian State really is to being totally sustainable. The team is dedicated to not only to make a car fit for racing, but to drive home the point that a solar powered car can be a big step toward sustainability.

As students, we should step up to help our fellow students and show how much we all care about advancing sustainability.

The team went to a solar car convention in April 2015 where collegiate solar car teams from all over America met to talk techniques and share new findings with each other. The Appalachian State team was approached by Iowa State’s team, who offered their previous car body as a friendly push into the sport.

However, winning a race is not everything for this group of students. They want to research the subject so when solar energy becomes more widespread, the information will have already done some of the groundwork.

As solar panel technology becomes cheaper and more accessible, this sort of research will help push solar energy into becoming a commercialized, renewable resource for everyone to use, Blakely said.

On a sunny day, the car can run for about 400 miles,  traveling within a range of 70-75 mph, depending on road conditions. Every car’s performance varies when adding in environmental factors.

In addition, the car is completely self-sufficient.

Even hybrid cars have to recharge their batteries at some point, which still uses energy from non-renewable resources. With this car, all you need is the sun to be able to charge the battery.

Solar car racing is not a cheap sport, though. The team would need $70,000 to go to preliminaries and the race.

The Renewable Energy Initiative is one of the teams biggest funders, while the rest comes from companies, friends, family and even team members themselves. However, this does not mean that the team is well off to getting the amount they need.

The website offers a donation page and an “Adopt-a-Part” program where you can help pay for a piece of the car or trip and get credited for it. You can even get some Appalachian State Solar Car apparel while you’re at it.

This project is a great representation of our campus community. It shows the determination of the students here and the desire they have to make a difference int he world.

This event, as well as the whole project, gives us a great opportunity to becoming personally involved in building a more sustainable world. We should take advantage of it.

Branch, a sophomore journalism major from Brunswick, Ga., is an opinion writer.