A team from Appalachian and the Community Together organization created a “one-stop shop” that is working to keep students and the community informed about voting in Watauga County.

Heather Jo Mashburn, associate director of ACT, said AppVotes, a nonpartisan site, gives students access to necessary resources to register to vote, create a voting plan and learn about what is on the ballot.

“Our vision is to implement voter registration and education activities and increase student participation in local, state, and national voting and election initiatives this year and in future elections,” Mashburn said.

The AppVotes team wants to encourage students to vote with social distancing and other restrictions in mind.

Each month this fall, AppVotes will focus on different topics like voter registration, education, mobilization and census participation.

“The first step to ensuring your voice is heard at the polls is registering to vote,” said Em McLamb, graduate assistant for ACT.

McLamb’s role with AppVotes is to help staff engage with campus and county organizations.

Of App State students who were eligible to vote in 2018, only about 70% were actually registered, McLamb said.

Macki Synder, assistant director for leadership and outreach for ACT said the two main focuses of AppVotes are education and voter mobilization.

“We are trying to increase the number of people who go to the polls by reducing barriers to voting,” Synder said.

In 2016, a major voting barrier in North Carolina was the photo ID requirement.

According to the North Carolina Justice Center, laws that require a photo ID at the voting booth have been documented to harm voters with low incomes and specifically targets Black and Latinx, a person of Latin American origin or descent, voters. 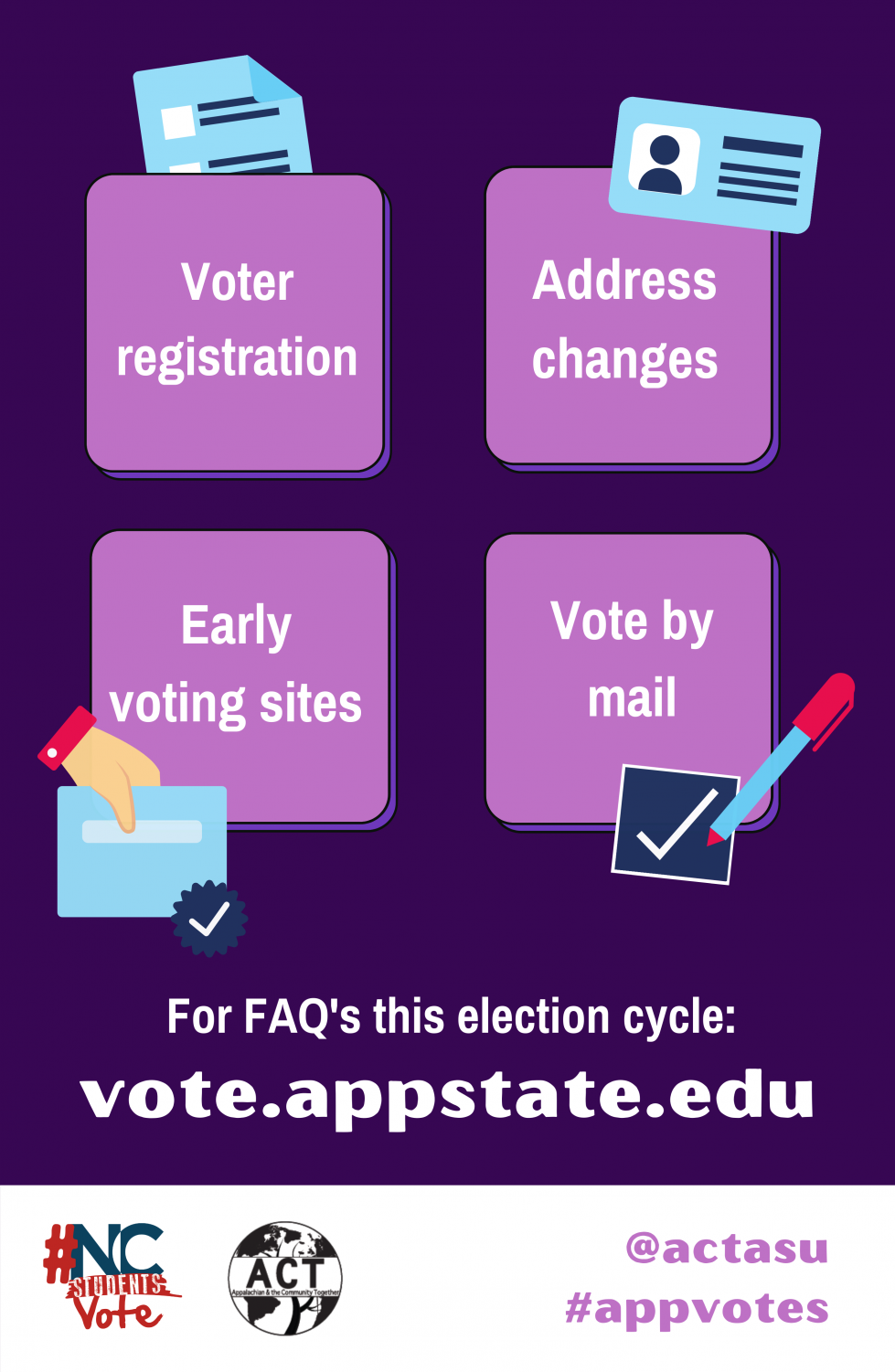 Another topic AppVotes will provide information about is the census. Every 10 years, the census counts every resident in the United States to help determine how federal funding is distributed to states and communities.

“So many students were sent home right when the census went out,” Synder said. “We’re focusing on getting the census return rate to increase in Watauga County.”

AppVotes is also pushing for a change in the demographics of poll workers.

“Most poll workers are over the age of 60 and have increased negative or severe consequences if they contract COVID-19,” Synder said. “There’s a big push to recruit specifically-called students to work the polls because of the increase of an at-risk population.”

McLamb said by making information more accessible and consumable, AppVotes hopes students will feel empowered to vote and remain engaged in their community.

“Having democratic engagement become part of Appalachian’s culture is going to take a lot of work,” Synder said. “It will be most successful if we’re collaborative in those efforts.”

Early voting starts Oct. 15 and ends Oct. 31. Students will have the option to early vote in the Blue Ridge Ballroom in the Plemmons Student Union.