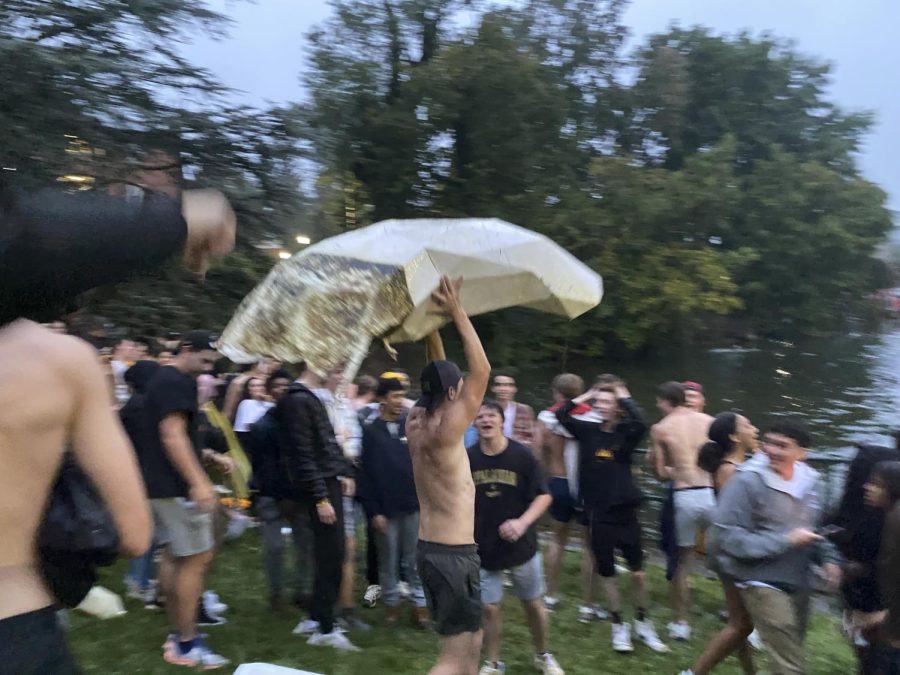 Fans break off a part of the duck pond sculpture and bring it to land before throwing it back into the pond after App State’s win over No. 6 Texas A&M.

After Saturday’s game, fans rushed to King Street, celebrating App State’s victory against a top 10 team. Following the celebration, the crowd moved to the football stadium and eventually to the Duck Pond, where the vandalism occurred.

Crowd members swam in the water, climbed atop the sculpture, breaking it limb from limb, set off fireworks and more.

“People were jumping in, flipping, etc. I didn’t expect the baby, the fireworks or the Roman candle,” wrote Ja’de Bass, a sophomore computer science major present during the event.

The floating sculpture, resembling a baby and titled “Lost and Found,” by artist Kevin Curry, the Area Head of Sculpture at Florida State University, was installed three months ago by the university.

Curry posted about the vandalization of his work on his Instagram.

“After installing this floating sculpture of a baby at Appalachian State University, their football fans were so excited to win a game that they decided to swim out and tear my work apart,” Curry wrote in the caption of his post. “The prognosis is not good.”

The piece’s destruction was significant, as some elements were reportedly found strewn around the surrounding area, including an arm behind Kidd Brewer Stadium, according to Curry’s Instagram post.

Caitlyn Cook, a senior studio art major, said she visited the scene Saturday night to “assess the situation” and saw people bringing pieces of the sculpture out of the water.

Cook said in addition to trying to salvage the broken pieces, she approached one of the officers on site, an App State police officer, asking if there was more that could be done about the situation. The officer reportedly claimed “there was nothing he could do” as they were trying to minimize violence within the crowd and prevent injury.

Some police officers were also found taking pictures with students.

“I was highly confused why the police weren’t really putting in effort but taking photos with students as well,” Bass wrote.

Erik Olson, a junior sustainable development major, said he knew nothing about any further damage but was neutral about the incident, calling the sculpture an “eyesore,” as it was already stained by water and weather.

“I know it’s fundamentally not a good thing that it was vandalized, but students didn’t get any input on the selection of that statue in the first place,” Olson said.

Wey Hall, an academic building housing the Department of Art, was vandalized Sept. 3 after the UNC-Chapel Hill game.

Cook said the vandalists reportedly entered through a window and emptied trash cans, mop buckets and chemical supplies used for ceramics throughout the building. A studio space was also covered in water during the incident.

Cook said while students were working in the building at the time of the incident, those doing the vandalizing did not harm them nor their work.

“I just feel like we have so much pride in our school for all of the sports teams that it would be, I think, really good to also have that pride for the other departments on campus,” Cook said.

The Town of Boone released an official statement about the incident Monday, stating “while we support App State football fans, we do ask that y’all remain respectful of your surroundings.” The post also asked fans to “refrain from creating safety hazards for yourself, your friends, motorists, and businesses,” reminding them to use sidewalks.

“We want everyone to stay safe, and continue to enjoy our Mountaineers, so let’s stay off the street, out of the duck pond, and have a great (and safe) time this upcoming Saturday,” the Town of Boone wrote in their post.

SGA also made a statement regarding the destruction, which they posted on their Instagram Sunday.

“Art plays a critical role within our community and the lack of respect for our art community, for the glory of an albeit-well-deserved celebration is deplorable,” the statement says. “This behavior is not conclusive of our mountaineer pride nor an accurate representation of the standard of Appalachian State fans.”

App State and App State Police could not be reached for comment.