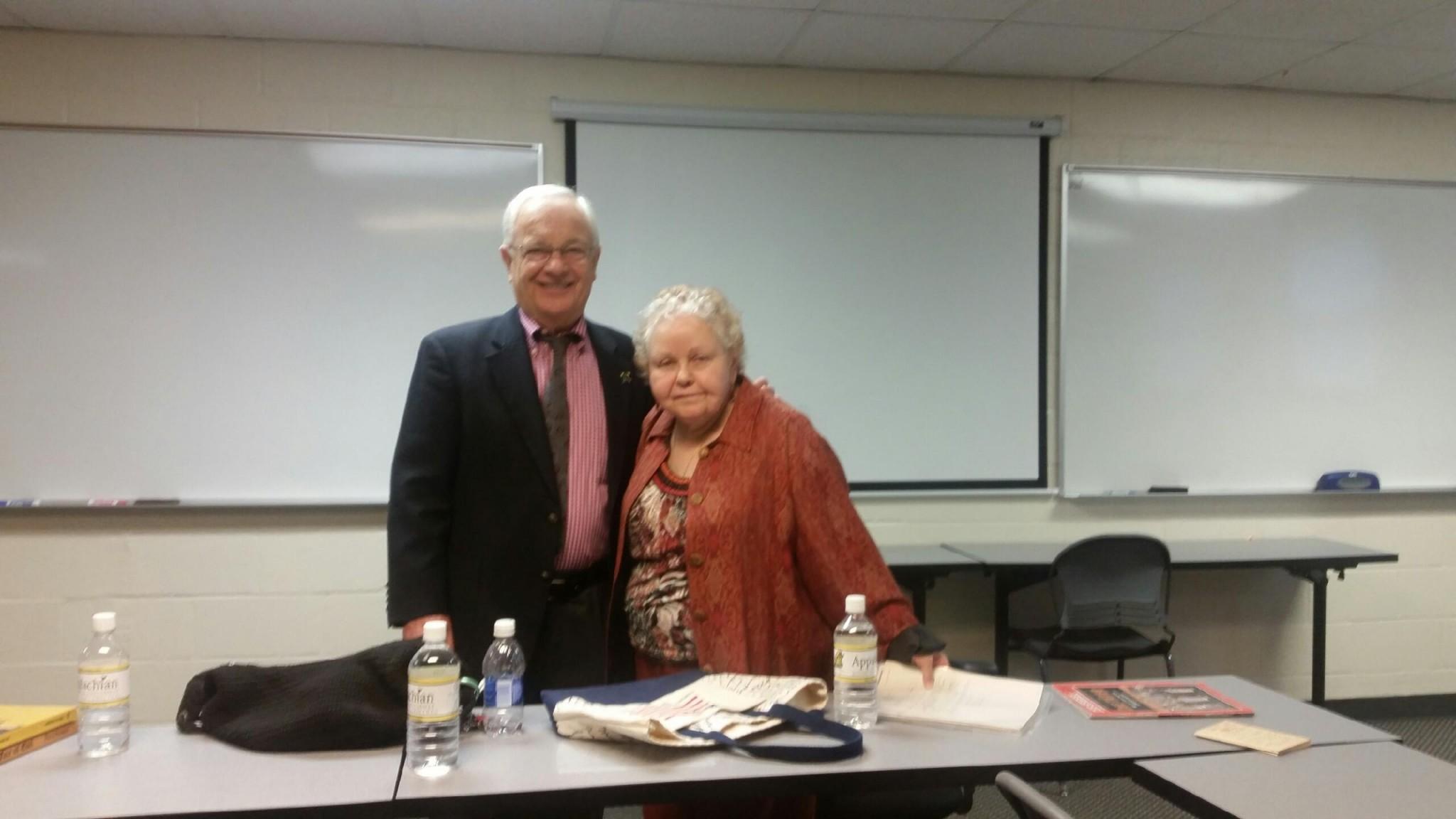 An English class at Appalachian State University hosted a Holocaust survivor and a German officer’s son on March 26 as part of the heroes theme that the class has been studying all semester.

Janet Beck, academic advisor for the Learning Assistance Program and English professor, invited Zohara Boyd, 73, and Peter Petschauer, 76, to share their stories and recollections of the Holocaust.

Boyd was born on April 17, 1942 in Piotrków Trybunalski, Poland. Piotrków Trybunalski was the first ghetto that the Nazis established when they invaded Poland. Her birth date is also known as Black Friday or Bloody Friday, because it marks the massacre of Jews in Poland.

“The age for both of us is kind of significant because in our early to mid 70s, we are among the youngest of the people who can actually put together a few memories and we are dying off at a frantic rate,” Boyd said. “The people who are a few years above us or people who were in the army at that time are now in their 80s and 90s and a lot of them, even if alive, have no memories of any sort.”

Although Boyd was very young during the Holocaust, she has recollections from after World War II and has been able to piece things together from what she heard her parents talking about as she hid behind furniture.

Boyd said the ghetto “Nazi style” is quite different from a ghetto “American style.” While there are ways to get out of the ghetto in America, there was no way out of a ghetto established by the Nazis.

“Imagine [Appalachian’s] campus fenced in so that nobody can get in and nobody can get out – what you have with you is all you have,” Boyd said. “The school cafeteria has some food, but little will be brought in from time to time and those who try to smuggle some will be killed.”

During the Holocaust, people were being sent to ghettos or concentration camps. The weak, non-Aryan, the elderly and the physically impaired would be immediately killed after the Nazis took their clothes. If fortunate, the rest would be sent to Auschwitz, Boyd said.

At three months old, Boyd’s father, a judge before the war, made the observation that the trains – supposedly taking people to the eastern front to be resettled in Russia – were coming back too fast and that they needed to escape.

“Having been a judge, he had access to people in the outside – I don’t know how – who were able to bring him forged documents: baptismal certificates, birth certificates [and] marriage certificates,” she said.

The family name, Mushinsky, was a very Polish name and they were able to find a real Mushinsky family of Catholics who were the same age as her parents and their infant was within a few weeks of Boyd’s actual birth. With forged papers in that name, Boyd was able to escape the ghetto alongside her mother, father and her mother’s youngest sister. They lived with various families, but could never stay in one place for too long because they had no actual knowledge of Catholicism.

“One of the things that impresses me about Boyd’s story is that her father recognized something was wrong with these trains coming back so quickly,” Petschauer said. “Most people didn’t pay attention to that kind of stuff.”

Petschauer’s story is very different from Boyd’s. His father was born in Yugoslavia in a German speaking community and eventually received his Ph.D. in journalism.

His father’s first job was in liaison to the people from Yugoslavia who were trying to get jobs in Germany. His unit was then taken over by the German government and became part of an office under Heinrich Himmler, head of all SS and later the Gestapo.

“My parents were married in 1938 and I was born in 1939 in Berlin,” Petschauer said. “Things were going good at first. He got a nice job in northern Italy in 1939 to persuade German speakers in northern Italy to move away from Italy to other parts of Europe. Poland hadn’t been conquered yet, so first they were going to Austria, then Luxembourg and later to Poland.”

At first, the family was prosperous, but eventually the people that his father had persuaded to move away from Italy realized that they were not getting what they had been promised.

In September 1943, Petschauer’s father was sent back to Germany when Germany took over all of northern Italy and there was no need to transfer people out of Italy.

“Things weren’t totally bad, but things become much worse,” Petschauer said. “My father, for reasons I still don’t understand, got in trouble with one of his supervisors, so the pivotal moment of his life in Berlin came in July 1944 when a colleague of his took him to Dachau where he was shocked enough to volunteer for the army on the eastern front.”

His father was denied twice to be part of the army on the eastern front. The second time, his father received a memo from Himmler saying he would be killed if he volunteered again. By May 1945, Petschauer’s father was captured by the Americans and was kept in prison for three years.

While in prison, the flow of money between the family stopped. Petschauer’s mother had been used to living a middle to upper class lifestyle and when the money stopped coming and she realized her husband wasn’t the great administrator she thought him to be, she filed for divorce.

“So while things got better for Dr. Boyd’s family, our situation kept getting worse,” Petschauer said.

In 1967, after being married for a year, Boyd was diagnosed as 30 percent emotionally neurologically impaired by the Neurological Institute of the University of Heidelberg, Germany.

Boyd says she still hides in closets sometimes during a bad storm due to her memories of the bombings in Poland, she is really 4-feet-9-inches due to brittle bones, her teeth lacked calcium and never completely developed and the back of her head is “practically non-existent.”

“Even the slogan for survivors was ‘never again,’ that hasn’t been true,” Boyd said. “Rwanda, Bosnia, Serbia, what’s happening in the Middle East right now, those were all genocides and if any of you have any Native American blood, that was America’s big genocide and a very efficient one even though they didn’t have access to gas chambers and such.”