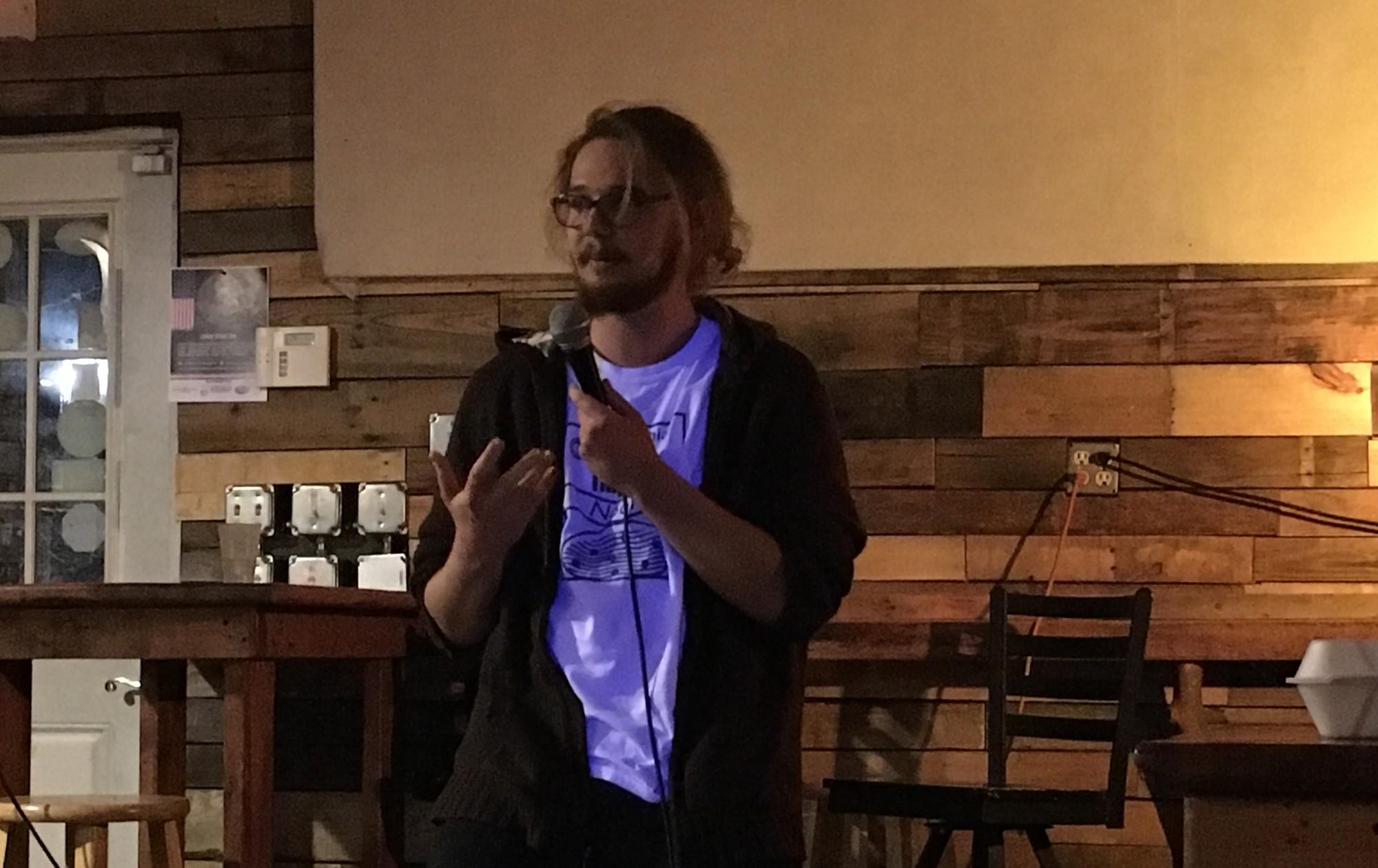 In the fall of 2015, a lecturer at Appalachian State approached several students with an idea to provide a venue for anyone with an interest in stand-up comedy to perform their routines. By the end of the semester, the club Appalachian State Stand-Up was officially founded.

Danny Malloy, a philosophy lecturer, originally wanted to teach a class on the philosophy of stand-up comedy. The university denied his request, as the subject fell outside of his department.

Instead of giving up on comedy altogether, Malloy emailed senior sociology major Eric Stevens and several other students about forming a club dedicated to stand-up comedy instead.

“The first meeting was early last semester with just a few people from [Malloy’s] classes who were interested,” Stevens said.

Over the course of the fall semester the club grew. What started as five comedically inclined students meeting to crack jokes has evolved into an organization with 20 writers and seven regular performers.The aspiring comedians meet three times a week, and Monday night meetings are dedicated to writing new material.

“Everyone brings in whatever ideas they have,” sophomore English secondary education major Brooke Hayhurst said. “It’s pretty beneficial to be able to collaborate with other people.”

Every other Monday, several members perform at The Local’s open mic night. The club meets for rehearsal on Wednesdays in room 119 of I.G. Greer from 8-9 p.m. before heading over to Appalachian Mountain Brewery.

“AMB is one of the first places that really bought into us and had us perform,” Stevens said.

The club is so well-received at the High Country microbrewery that they dedicated the last 30 minutes of their open mic night to the comedians.

“The first time the club showed up, [AMB] was just so happy to have someone there who wasn’t playing acoustic guitar,” Malloy said.

As the comedians perform their sets under ever-changing lights, the audience can be heard laughing and encouraging the performers. Some patrons even crack jokes back at the comedians.

Every other Friday, the club has started hosting an on-campus show. During the weeks they are not performing, they screen stand-up specials that are available on Netflix or HBO. For now, the shows and screenings take place in room 119 of I.G. Greer. The club’s first on-campus show on Feb. 19 had the classroom packed to standing room only.

This full house proved to be beneficial to the club which is trying to establish a bigger on-campus presence this semester, Malloy said.

“We want to be able to sustain the live shows on campus and hopefully move to a better venue,” Malloy said. “[I.G. Greer] 119 is lovely, but it’s still a classroom.”

Hayhurst said club meetings are structured in a way to help the members grow as comedians. “It looks like a bunch of students just riffing off of each other the entire time,” Hayhurst said.

But the members have goals and they reach them, albeit in their own dysfunctional way, Hayhurst said. In the long term, Malloy hopes the club will be the start of a comedy scene in Boone. This goal, he said, is definitely feasible.

As long as there are talented young performers who continue to write and perform, there is no reason comedy can’t come to Boone, Stevens said. Boone is a perfect town for stand-up and the arts as a whole.

Over the past summer Stevens went to New York City to perform at open mic nights at various comedy clubs. There, comedians perform almost entirely to other comedians, all waiting their turn to give their set.

“Boone gets a really good turnout,” Stevens said. “The performers are supportive and there’s a big turnout of people who are interested in being at the bar and seeing acts.”

Stevens said the crowds in Boone are also much more forgiving. “I found it to be a really good place to get a start,” he said.

Hayhurst never performed stand-up before joining the club, and as a transfer from Western Carolina, she never had the chance to perform.

“I’m a giant stand-up comedy nerd,” Hayhurst said. “Once I found out there was a club I seized the opportunity.”

Those interested in joining the stand-up club can attend their meetings in I.G. Greer 119 on Mondays and Wednesdays at 8 p.m.