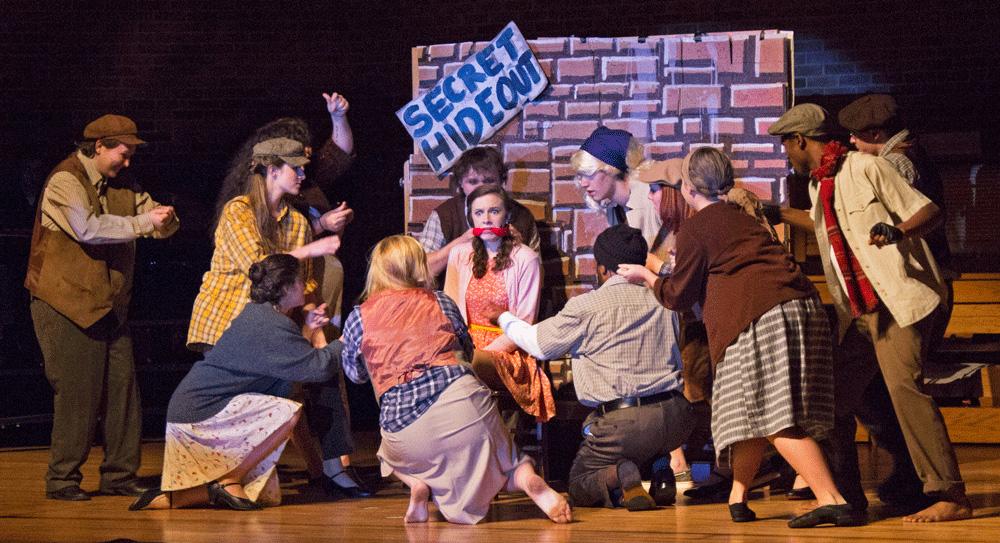 For some students, it may be intimidating to try to get involved with an activity in a department that they are not majoring in. However, there are many clubs on campus that allow and encourage students to participate regardless of their fields of study.

Appalachian State’s theater department is no exception to this. With several opportunities for students to get involved in acting, backstage work and other aspects of theater, anyone with a passion for or even a slight interest in theater will find a group they fit in with.

Three of these on-campus theatre groups are the Musical Theatre Club, Playcrafters and the Women and Inclusive Theatre Troupe. While each club’s main purpose is to perform plays or musicals, their choices in plays are different and their overall focuses are unique.

“Musical Theatre Club is not only a performing outlet for anyone, but also a club where we come together as people with similar interests and build friendships,” Savannah Bennett, junior biology major and public relations officer of the Musical Theatre Club, said.

Founded in 2012, the Musical Theatre Club usually produces one full-length musical each year. In the past, they have performed musicals such as “Rent,” “The Rocky Horror Picture Show” and “Chicago,” and are currently in the rehearsal process for “Legally Blonde.”

“We try to do a variety of shows, but we always select shows that we feel are more catered to a college audience, or shows that we think people have heard of and would like to come see,” Bennett said.

In addition to the full-length musical, the club also holds seasonal performances, such as the annual Halloween Masquerade Ball to benefit the Hunger and Health Coalition. During these performances, club members perform songs that fit the theme of the holiday.

Although “Legally Blonde,” the musical for fall 2016, has already been cast, students are still encouraged to join the Musical Theatre Club and take advantage of their other opportunities.

“A lot of times if people aren’t cast, they become discouraged and stop coming to meetings,” Bennett said. “But we really, really want to reach out and make sure that everyone who has a passion for performing finds that outlet.”

Playcrafters is a thespian society that focuses on all aspects of theatre, including acting, directing, lighting/sound and playwriting.

“The most interesting thing about Playcrafters is that it’s all student-run, especially our two big events during the year, the 24-Hour Play Festival and New Play Festival,” Kenny Petroski, senior theatre performance and English major and president of Playcrafters, said. “Those two events are student directed and acted and the plays are actually written by students too.”

Playcrafters also has workshops and special guests on different topics throughout the year, including acting and resume workshops.

“We encourage theatre and non-theatre majors alike to explore and challenge themselves,” Petroski said. “This gives students not only the opportunity to get involved on campus, but also gives them the opportunity to discover a passion for something within the theatre community.”

Playcrafters meets every first and third Wednesday at 5:15 p.m. in Chapell Wilson. For more information, those interested can visit the Playcrafters page on Facebook.

The Women and Inclusive Theatre Troupe is a theater organization on campus with a more specific focus.

Founded four years ago and previously called the Women’s Theatre Troupe, WITT always focused on women’s issues and how to call attention to them using theatre performances.

Recently, WITT’s goal has been to bring forward even more diverse voices in the theatre, said Rachel Scherer, junior theatre design and technology major and president of WITT. These voices include people of color, people of different sexualities and people with disabilities, among others.

Although the majority of WITT’s plays have focused on women’s issues, including the play for this year, Scherer hopes to include people of many different backgrounds in the troupe and to expand performances to address other marginalized groups’ issues.

WITT produces one show each year in either the fall or spring semester; this year’s show is being written by an Appalachian State alumnus and is about female boxers in the 1950s. The troupe also occasionally brings in guest speakers to address the ideals, goals and issues that WITT is passionate about.

“We try to find a balance between being a theatre club and a discussion group on the issues that we’re trying to focus on,” Scherer said.

Scherer said that any student, not only women, can join WITT, and can visit the group’s Facebook page for more information about meetings.

These clubs as well as other theatre groups on campus offer a wide range of opportunities for students to find or feed their passion for theatre, no matter their background.

“I am not a theatre major, but the theatre department is so welcoming and I have never felt like I didn’t fit in,” Bennett said. “Everyone is caring and positive, and we all want each other to succeed.”