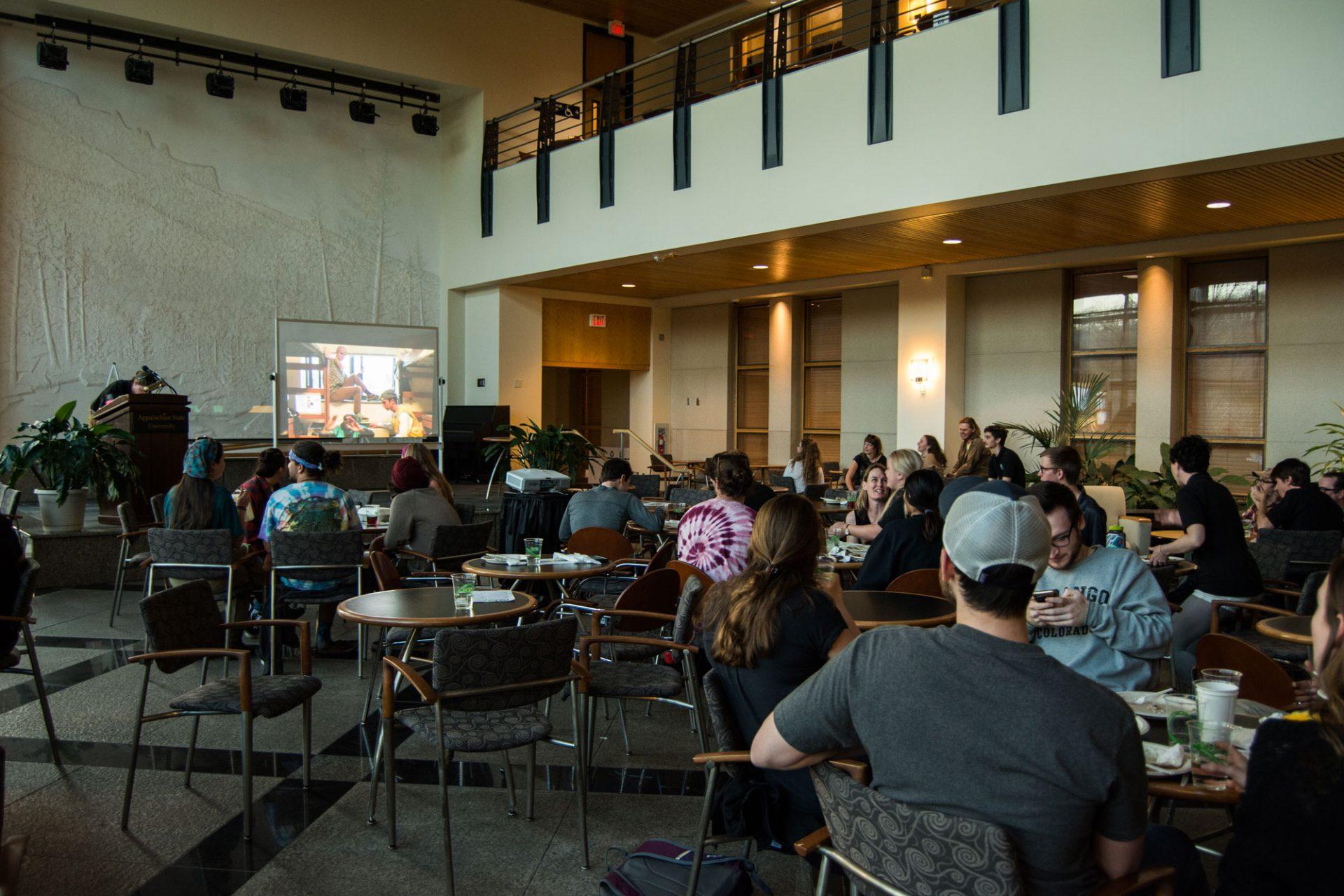 Students watch an informational video during the REI Forum on Thursday. The drop-in event offered a variety of free food and information.

The student-led and funded organization displayed student and faculty work through interactive workshops that encouraged fellow students to take a hands-on approach to learning about renewable practices.

Zero Waste interns told attendees about the university’s dedication to reducing our personal waste streams and the goal of becoming a zero waste campus.

In 2014, the Zero Waste stadium initiative was launched with the brain power of the Office of Sustainability, Physical Plant and Athletics. The initiative designates Zero Waste zones within the stadium where tailgaters and football fans can sort their landfill trash from recyclables and compost.

Not only does the Zero Waste initiative attempt to make it easier for students to responsibly throw away their trash, but it also ensures that everything sold in the stadium from wrappers to cups are either recyclable or compostable.

In addition to the Recycle at the Rock initiative, Zero Waste interns discussed the university’s composting measures and provided tips and tricks for waste reduction.

ASUREI also invited other student clubs such as the Beekeeping Club and Team Sunergy to the event.

Students were able to race solar powered toy cars at Team Sunergy’s booth, where they received an introductory course about how the sun turns energy into power.

Team Sunergy, in its first year of competition in 2016, placed third in the Formula Sun Grand Prix. The team is finishing construction on their second car, one the team said will keep the daily driver in mind. Unlike their current model, the new solar vehicle will be designed with headlights, windshield wipers and trunk space.

“The model will be ready for this summer’s American Solar Challenge, which is a race that will stretch along the Oregon Trail. The car will travel from Hastings, Nebraska, to Bend, Oregon,” Kuettel said.

During the summer of 2019, the team also hopes to take on the World Solar Challenge. The challenge will require the driver to travel across the continent of Australia in the solar vehicle relying entirely on solar energy.

Students also got active during a workshop led by Jim Dees, a data and assessment specialist with a focus on sustainability data.

The goal of the workshop was to make a cup of coffee. However, rather than making a cup the traditional way, Dees started by attaching a coffee grinder to the back of a stationary bike that was powered by a volunteer.

As Dees pointed out, the process of grinding coffee beans may take no longer than thirty seconds using a grinder at home. However, through his demonstration Dees hoped to illustrate the amount of time and energy that goes into everyday tasks.

The path to getting a cup of coffee took approximately ten minutes, two volunteers and one solar powered generator.

“Tomorrow we’re going to make coffee the regular way by plugging a machine into the wall,” Dees said. “We have the technology to change that. Although we may have to change our perspective and expectations, the goal of the workshop is to make a cup of coffee and think about what we really expect Mother Earth to do for us.”

Some students said that although they would become more aware of their energy consumption it would be difficult make the transition to a more sustainable lifestyle.

“I don’t know if I could ever become that extreme when it comes to conserving energy. I have a rough time getting out of bed, let alone using a bike to grind my coffee every morning. But I guess I’ll be more conscious about what energy I do use,” Dominique Breland, a senior engineering technology major from North Carolina A&T State University, said.

Appalachian was ranked 40 out of 227 schools, according to the 2017 release of Sierra Magazine’s “Cool Schools” list. The Sierra Magazine is published by the Sierra Club, a grassroots environmental organization that focuses on sustainability through protecting land as well as lobbying for conscious legislature such as the Clean Air Act.

“Cool Schools” are ranked according to their pledges in areas such as energy, water and waste usage as well as their commitment to academics, innovation, transport and other categories.

Featured Photo Caption: Students watch an informational video during the REI Forum on Thursday. The drop-in event offered a variety of free food and information.