Baring it all for art 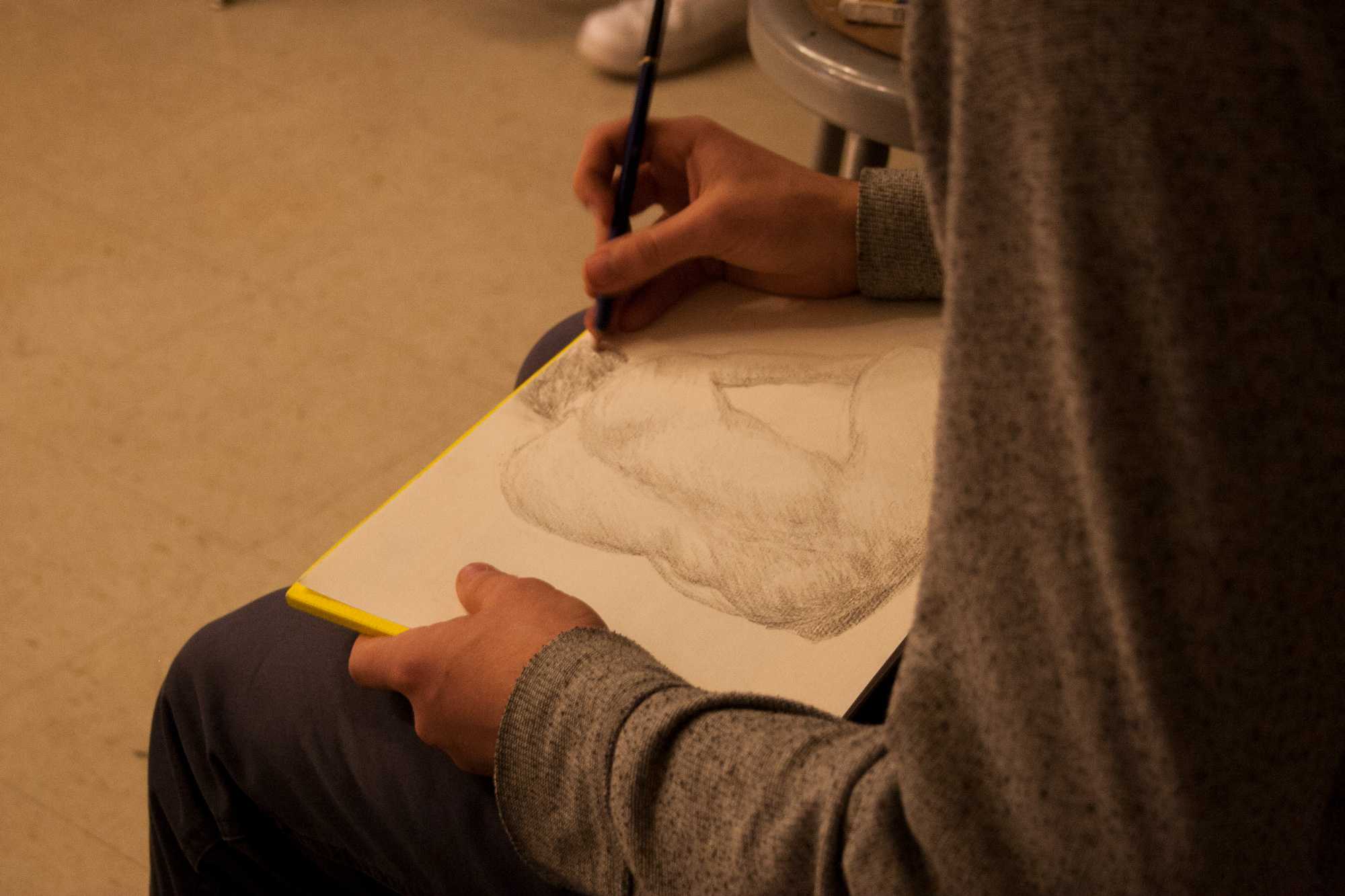 Sophomore, Seth Pray, draws a nude model. A figure drawing session was held in Wey Hall on Friday, November 11th. Students could sign up and come in and draw a live nude model to practice their skills.

Nude modeling, or figure drawing modeling, is incorporated in a select few drawing classes offered on campus in order to give art students practice drawing a moving object.

“It’s honestly really relaxing,” Moxley said. “When you’re doing the longer poses, it can almost be meditative. Sometimes I’ll do breathing exercises. It’s a nice time to sit, think and reflect about my day.”

Some classes require models to shift poses every 30 seconds, while other classes want the model to stay in one pose for upwards of two hours.

Shorter poses are easy to think of, Moxley said. But shorter poses can also  be more complex because they require constant movement.

Longer poses require much more thought than shorter poses because the models have to consider if the pose will be painful to hold for a long period of time, Moxley said.

“I think if it’s interesting, you’re probably going to be uncomfortable by the end of it,” Moxley said.

Moxley originally didn’t think that being naked would be the most uncomfortable part about figure drawing modeling. Rather, she said she was concerned with being the center of attention.

Figure drawing models are typically in the center of drawing classes, with students dispersed in a circle or semicircle around them. Lights in the room are typically lowered in order to create shadows and highlights on the model.

Moxley said that sometimes professors will give her a prop, like a staff, that she has to use so students have to incorporate more elements into their drawings.

Although Moxley originally started modeling because she wanted to step out of her comfort zone, she said that it’s been a worthwhile experience thus far.

“You’re putting yourself in a position where you’re fully yourself and you’re vulnerable,” Moxley said. “I think that’s a very valuable human experience for people to have.”

Figure drawing model Hunter Hill, a senior studio art and art education major, said that nudity is nothing to be scared of. However, she did not have that mentality when she first started modeling.

Hill said that she had body image issues in the past, but nude modeling has increased her confidence.

“It’s made me really be in tune with my body,” Hill said. “It’s really relaxing, and it’s really cool to go back and see some of the drawings or paintings that people have made.”

Since Hill took classes in the art department, she has been on the other side of figure drawing classes as the artist. Hill said she liked looking around the classroom at everyone’s drawings of her, because everyone interprets her differently.

Hill said that she likes how she is essentially another object that art students draw. She would be no different than a Coke bottle that they have to observe and draw.

“When you’re drawing something, you’re looking at how the lines and the light hit something instead of looking at it in a sexual way,” Hill said.

Hill said that she thinks people are afraid of nude modeling because they are fearful of people analyzing their body in a sexual context, but she said that is not reality. Art students look at the human body in terms of lines, contours and shapes.

As an artist, Hill said that figure drawing has sharpened her observation skills and made her less critical of her art. The point of figure drawing is observing and then going back to fix errors, and accepting that the drawings don’t have to be perfect.

Drawing figures has helped Hill figure out what poses are common and easy to hold, poses that were interesting to draw and poses that did not work at all.

Desiree Decena, a sophomore graphic design major, enjoys figure drawing because students are free to make suggestions to the model, and it’s “more realistic of a body” than if she practiced drawing figures from a computer.

Decena said that figure drawing has helped her in graphic design and honing her own style.

“It opens up a part of my right brain,” Decena said. “It helps my hand flow more freely.”

Students can practice drawing an object, like a bottle, that may or may not be an interesting drawing or painting, Sorlien said. The human body is more interesting because mannerisms and movement vary from person to person, which creates more space for interpretation, Sorlien said.

“I think there are lots of subtleties from a human form that you don’t get from a static object,” Sorlien said. “The movement forces you to make observations and work harder in capturing the essence of the object.”

Sorlien said that Ancient Greeks were such masters in drawing and painting because they incorporated figure drawing into art.

Even when the human form is not explicitly incorporated into a piece of art, it still influences artwork, Sorlien said.

For example, a sculptor featured in Turchin Arts Center is heavily influenced by ships and boats, Sorlien said. Although the pieces are not human figures, they have “curves and organic folds” that are influenced by the human figure.

“I think the reason the human form is so often incorporated into art is because we’re trying to understand the human condition,” Sorlien said.