Baseball relies on experience in 2019 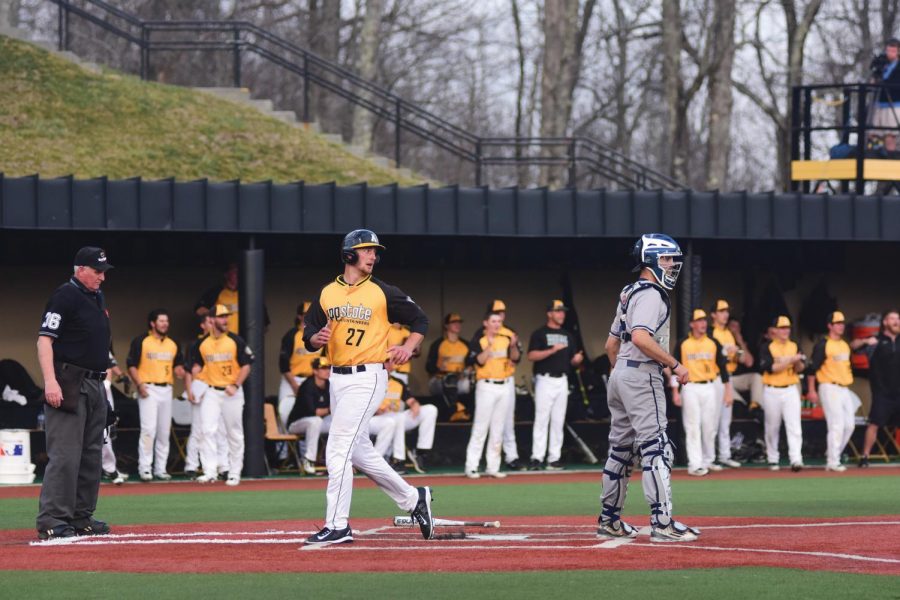 A player begins to run to first base during the 2016 season. Photo by Dallas Linger.

Coming off a disappointing 2018 season that resulted in a 18-36 record and a last place finish in the Sun Belt Conference, the App State baseball team looks for a reboot in 2019.

Leading the ship is third-year head coach Kermit Smith who said he looks to utilize the experience gained from 2018 as a building block for the coming season.

“I think experience is the biggest attribute we have from last year to this year,” Smith said. “Anytime you come into a season where three of your better players are freshmen, I think the maturity aspect will play a big role.”

The Mountaineers received major contributions in 2018 from freshman pitcher Will Sprinkle who threw 48.2 innings and maintained the second lowest ERA on the team at 2.96 and held opposing batters to a .226 average. As he heads into his second season, Sprinkle said what he learned in 2018 will make 2019 better.

“(I just know) what it takes to be successful in preparation and trust what coach (Justin) Aspegren tells me to do,” Sprinkle said.

Besides experience, the Mountaineers will have a home field boost this year. The team has a total of 28 home games this year compared to only 20 last season. In 2018 the team started the season with 25 of its first 28 games scheduled on the road, a stretch that can really take a physical and mental toll on players.

“Traveling really put a toll on a lot of the older guys and even some of the younger guys who weren’t use to traveling that much, so having a lot more home games is going to be a big advantage for us,” junior pitcher Andrew Papp said. “Sitting on a bus for six to seven hour drives and not having your own bed, it’s just different.”

During these long road trips and the challenges that come with them the team developed comradery, which can be a big advantage in the 2019 campaign.

“My favorite aspect is I think how close we are as a team,” Papp said. “There’s not a guy that doesn’t get along with another guy. It’s just something special we have here that not a lot of other places have.”