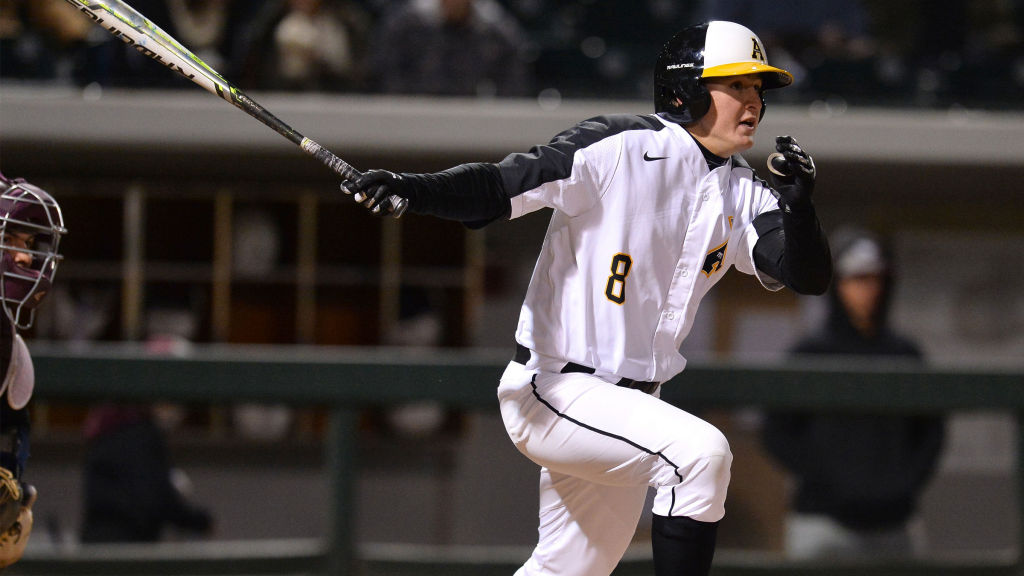 The Mountaineer’s baseball team could not escape the cold weather in Charlotte, but their bats kept them warm as they racked up a season high 14 hits. App was able to lead an offensive assault on the N.C. Central Eagles and take the win 9-5 in their first of a two game sweep over the Eagles this week.

Taking place at BB&T Ballpark, home of the Charlotte Knights Minor League team, it still felt like a home game for the Apps (8-9). With the temperature being 38 degrees at first pitch, they were not out of their element.

“72 and sunny,” head coach Kermit Smith said to describe the cold weather. “It was a good day for the Mountaineers.”

Following a scoreless top of the first inning from NCCU (9-8), App started to churn out the runs.

Freshman Calev Grubbs started the game off with a single, and then advanced to second off a pickoff attempt that got by the first baseman.

Sophomore Jason Curtis stepped in and singled down the leftfield line, but then advanced to second off an error in left field, which also scored Grubbs.

Curtis would end up having a solid day in what was a homecoming for him, returning to his home city. He would finish with two hits on four at bats, with two RBI’s and a run scored.

The performance was followed by senior Matt Vernon walking and junior Chandler Seagle, who singled into left field to load the bases. Senior Brian Bauk took his turn at the dish, and sent another liner up the middle, scoring two runs and giving the Apps a 3-0 lead to start the game. 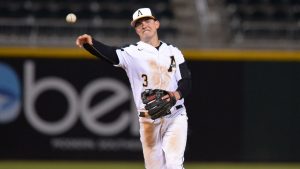 Starting pitcher Matt Schaeffer was able to maintain the lead for the Mountaineers, getting out of a couple first and third jams early in the game giving the team confidence in the bottom half.

The home half of the second inning was another eventful one for the Apps. Recording two hits and along with NCCU having two errors, they were able to post another three runs, putting the score to 6-1 after the Mountaineers gave up one run in a bases loaded situation in the top half.

Junior Tyler Stroup got in on the action in the third inning, blasting a solo shot to right field hitting the upper deck, his third of the season. Stroup pushed the lead to 7-2 going into the fourth. Stroup finished the game hitting 2-5 with two RBI’s.

“Its awesome playing out here,” Stroup said. “Last time we came out here it was beautiful and and an awesome experience. I love playing here.”

The team played in BB&T Ballpark last season against ACC school Wake Forest, a game in which they lost 7-10.

Things would settle down the stretch with a few runs dribbling in from each side as both teams were able to reach double digit hits on the night, 10 for NCCU and 14 for App.

Senior Sean Mason entered the game in the top of the eighth inning looking for the save. He gave up one run in the eighth, a double down the left field line scoring one and putting a man on second and third. Mason got out of the jam and sent the Mountaineers to the bottom, only giving up one run.

Mason ran into some trouble in the ninth, giving up a couple of hits and one run with two outs, but was ultimately able to close out the game, giving the team the win 9-5.

The Mountaineers said they were excited to have the privilege to play at a ballpark like this one, which is also used by the Chicago White Sox Minor league team, the Charlotte Knights.

“Kids walk out there and see the grass and the skyline and the beautiful night,” Smith said. “Our guys really appreciated it and everything in here they get a kick out of it, get treated like AAA guys for a day.”

The second game against NCCU took place March 15 at Durham Athletic Park in Durham, NC. App would get the series sweep, winning it 7-5.

Starting pitcher Bobby Hampton had a career day for the Mountaineers. He pitched 6.2 innings, giving up only two runs and striking out 10 batters, a feat that an App State pitcher has not reached since 2013.

The bats were working again with four Mountaineer players earning double-digit hits for the game. Stroup and Seagle lead the way with two hits on three attempts at the plate.

App would take the early lead against the Eagles, getting their first two runs in the third inning, then piling on four more in the fourth, and they would never look back.

Hampton would earn the win, bringing him to a 2-1 record on the season.

The Apps will head down to Louisiana next to take on UL Lafayette for a weekend series in their first conference play. The first game is this Friday, with the first pitch at 7:00 p.m.