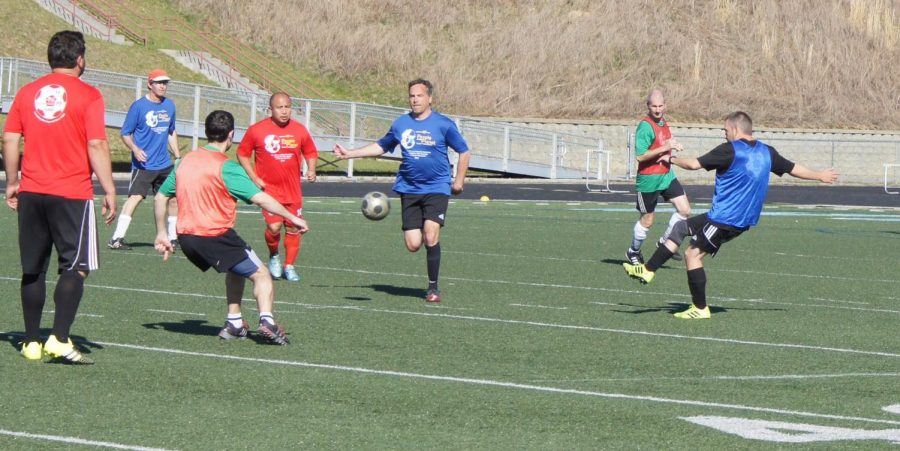 Adult soccer players from around the world compete on the pitch at High Country Soccer Association's People of the Planet event in 2017. Rahman Tashakkori, a professor at App State, says this is an example of how soccer is a global sport with an international community.

Rahman Tashakkori, a professor in the High Country of North Carolina, looks forward to every Sunday. Not to rest, but to play a game that taught him the trick of life as a 5-year-old Iranian.

“I grew up in a very poor neighborhood. Soccer was school for us. No coaching, no nothing. Just friends,” Tashakkori said. “We had so many problems as (children). We were involved with wars – a war that lasted eight years. There was not a place that was safe, but that soccer field was a safe place for us.”

Founded in 1986, HCSA has provided the Boone community with a soccer outlet besides parks and recreation. The organization serves over 250 adult players and 550 youth players a year, according to its website.

HCSA practices a certain kind of player development that prioritizes “enjoyment and development” of individuals, according to its website.

Rick Suyao, executive director of HCSA, said the association has had constant teams since soccer’s 2007 blow up in Boone. The association quickly specialized in serving youth players through travel teams.

“I’ve appreciated soccer for a long time now, but I really grew to love it after my kids started playing,” said Brett Taubman, who plays in the adult league. “That’s when you’re able to witness the pure joy of playing the game.”

The association’s adult league didn’t form until 2001, when Tashakkori and his graduate student started the program.

“It was one of the first groups that I connected with in Boone, and has been the source of hundreds of great friendships over the last decade,” said Daniel Ames, HCSA coach and App State alum. “We have an incredible soccer community here, especially for being such a small town.”

Adults aged 18, 35 and older can participate in the league through three levels: Gold, Silver and Bronze. Bronze players aim for a more casual game, while Gold players participate in a fast-paced environment.

“The fact that you get to play with your friends, and make new friends with people from all different walks of life, makes it really special,” Taubman said. “I probably wouldn’t have much of a social life if it wasn’t for soccer.”

Surprisingly, this concept of a soccer social life did not end because of COVID-19.

The league sees 250 to 300 adults on game nights throughout the week. Even with COVID-19 barriers, HCSA has seen record numbers of players and teams this year.

“I think the league has continued to be a good haven for people who are missing out on some other parts of life due to the pandemic,” Ames said, adding that players might catch up over a drink after going head-to-head.

According to the New York Times, people aged 65 and older were more likely to continue exercise habits picked up in quarantine once restrictions began to ease in spring 2020.

Taubman is a chemistry professor at App State. He said his job can be “so cerebral.”

“No matter how stressful work is sometimes, I know that I have the league to look forward to and hanging out with other lovers of the game, some of whom are well past their primes like me, but still hanging on to the last shreds of glory,” Taubman said. “If it weren’t for soccer, my work-life balance would be way off. It’s one of the main things that provides me balance in life in general.”

Tashakkori says the players within the adult league are so committed to the sport, they shoveled snow off the field to play a Sunday pick-up game. He says this shows how badly people needed a social environment in quarantine.

Tashakkori is the computer science department chair at App State. He said for him, the adult league is like “therapy in many ways.”

“For me, it is a counseling session. It would be a rough week, in a chair and teaching,” Tashakkori said.

He said it’s been possible to relieve COVID-19 stress through the league since HCSA abides by statewide orders and guidelines. Players cannot shake hands before and after games, but Tashakkori says “there is an extreme respect for each other.” He credits much of this to the globality of the sport that translates into the Boone community, a community that is majority white.

“There’s a lot of diversity and I think really soccer (brings) us together,” Tashakkori said. “And only soccer – no synagogue, no mosque, but soccer, football – (brings) them together.”

Ames said he remembers this sense of an international soccer community since being a student at App State.

“We would have 60 to 80 people out at the fields at least three or four times a week, everyone from locals to international students. I remember playing with other students from Germany, France, Vietnam, South Korea, Indonesia, Bolivia, Chile, Argentina, Honduras, Mexico, all in the same day,” Ames said. “It created a special community and everyone was just there to have fun.”

Taubman says it’s this language of soccer that makes the sport a “beautiful game for a reason.”

“It’s the simplest game in the world, running around with a ball at your feet, which is also what makes it so perfect. It’s the world’s most popular sport too, so you know that no matter where you are in the world you can always find soccer fans,” Taubman said.

Whether to find peace in a pandemic-infected world or reflect on memories of his home country, Tashakkori goes to the pitch every Sunday.