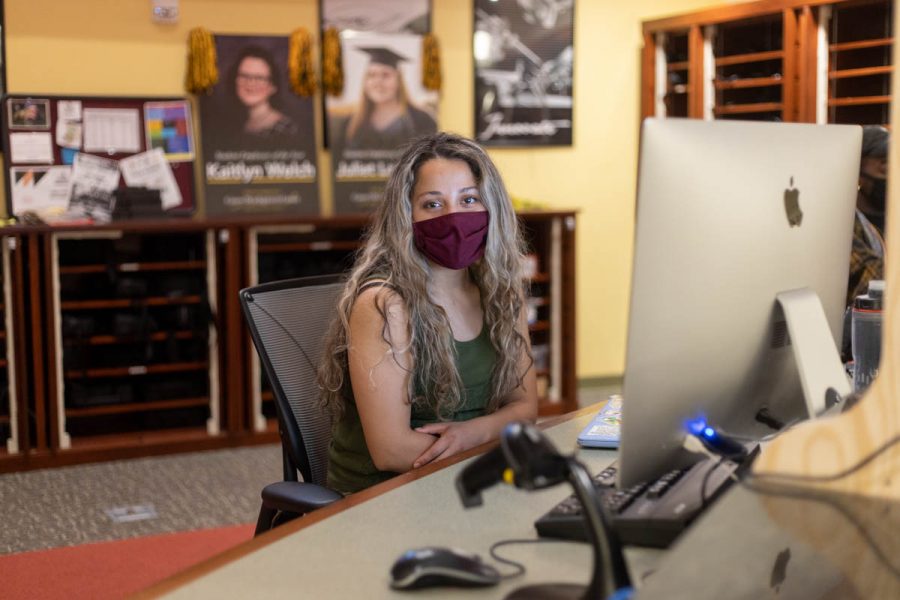 Sarai Nolasco, senior advertising major, has worked at Belk Library for two years. She said that she wishes staff wouldn’t have to pay to come to work, as it’s financially taxing, especially for students who are on scholarship.

Working on campus can come with its perks: being in a familiar environment, working alongside your peers and navigating around a class schedule. But, some student employees from Belk Library and Information Commons are being told the library parking deck is booked out.

These student employees do not receive a parking pass to use during their shift and have to either risk a parking ticket on campus, park off campus, get dropped off or spend a couple hundred dollars on a pass.

Jakob Minton, a senior who works at the technology desk in the lower level of the library, said he is one of the “lucky ones” who found parking elsewhere; Minton borrows a pass from a friend. However, he said coworker Miles Grier has been “waging war against parking” for some time.

When students returned to campus in the fall of 2020, Grier parked in a staff spot in the library parking deck for his shift and received a ticket, but for $0.

“I assumed that since it’s COVID, they’re allowing people to park in here,” Grier said. “And then one day I got a ticket for 40 bucks and I was confused.”

Grier said he contacted student parking and was told that he was unable to park there because it would be unfair to other students and was encouraged to purchase a parking pass.

“It was ridiculous that I would have to pay to park at a place that I work,” Grier said.

The Appalachian reached out to Belk Library and Information Commons on parking, but was redirected to App State spokesperson Megan Hayes. She said the university is not able to offer free parking to student employees.

“As our students know, it is not unusual for App State students to utilize the AppalCart for free public transportation, utilize other alternative transportation, or choose to pay to park on or near campus in order to work or attend classes,” Hayes wrote in a statement.

Without having a parking pass, Sarai Nolasco, a senior who works at the technology desk, pays $1 an hour to park on King Street.

“But it adds up. It’ll be $40 a month,” Nolasco said. “Which is unfortunate because, me personally, I am a scholarship student so any money I make, I need.”

King Street meters allow two hours of parking at a time.  Nolasco said she has to constantly go out during her shift to reload the meter.

Lane Moody, the downtown development coordinator for the Town of Boone, said parking has always been a “difficult” topic in the community. Moody said she understands that it may be more financially viable for some students to park on King Street as opposed to purchasing an expensive parking pass.

“There are some business owners that get frustrated when they see somebody pull up in front of their business, put on a bookbag and walk away because that takes away a space from their customers,” Moody said.

As a solution, Moody hopes the Town of Boone will build a parking deck downtown one day. But, she said there is a lot of planning before that could happen. She praised the work of the Boone parking staff, the only all-female department in the town.

Nolasco said there should be a system for students to use a temporary pass that they could use during their shifts and return afterward.

She said her boss has brought the issue to parking services before but nothing has come from it. Minton is a student representative on the Library Council and plans to bring the issue to them.