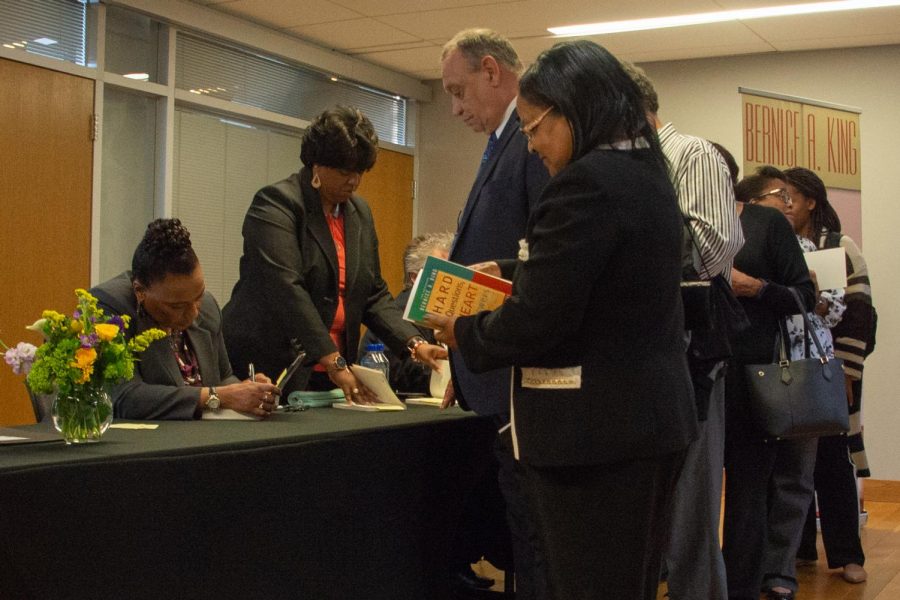 Bernice King made an appearance at App State's Diversity Celebration: World of Excellence on Thursday. King spoke at the event and even offered a book signing. Photo by Lynette Files

When Bernice King is introduced, “youngest daughter of Martin Luther King Jr.” usually follows. King, however, said she is just a black woman living in the United States who wants equal living for everyone.

King is the CEO of The King Center, which advocates for nonviolence. She spoke at App State’s Diversity Celebration: World of Excellence on April 11. The Multicultural and LGBT centers, the National Pan-Hellenic Council and other organizations supported the event.

King shared how her family legacy has made her into the independent peace advocate she is today.

King said discussing living together peacefully is important in a climate that “cancels people,” or does not listen. She said a university—a place where students learn more about inclusivity and working with others—is the best place to talk about peace.

King explained that inclusion, especially at a university, does not always mean mixing different ethnicities together, but learning from one another through language.

“Inclusion is honestly more than a notion,” King said. “It’s more than bringing people of diverse backgrounds together.”

King said it is time to start living inclusively, not just celebrating or recruiting for diversity. She said people sometimes think of inclusion as doing someone a favor, instead of standing with them.

“There’s another level we have to push past because even that can be a little bit superficial,” King said.

King said Americans face the challenge of forming real, inclusive relationships and connections with others.

“It’s hard work, and it’s heart work,” King said. “At the end of the day, in order to conquer the issues in our society, it’s going to require some heart work and not just analytical work.”

When asked what App State students can do in terms of inclusivity and diversity, King said it all starts with a mindset of respecting people’s worth and place in society.