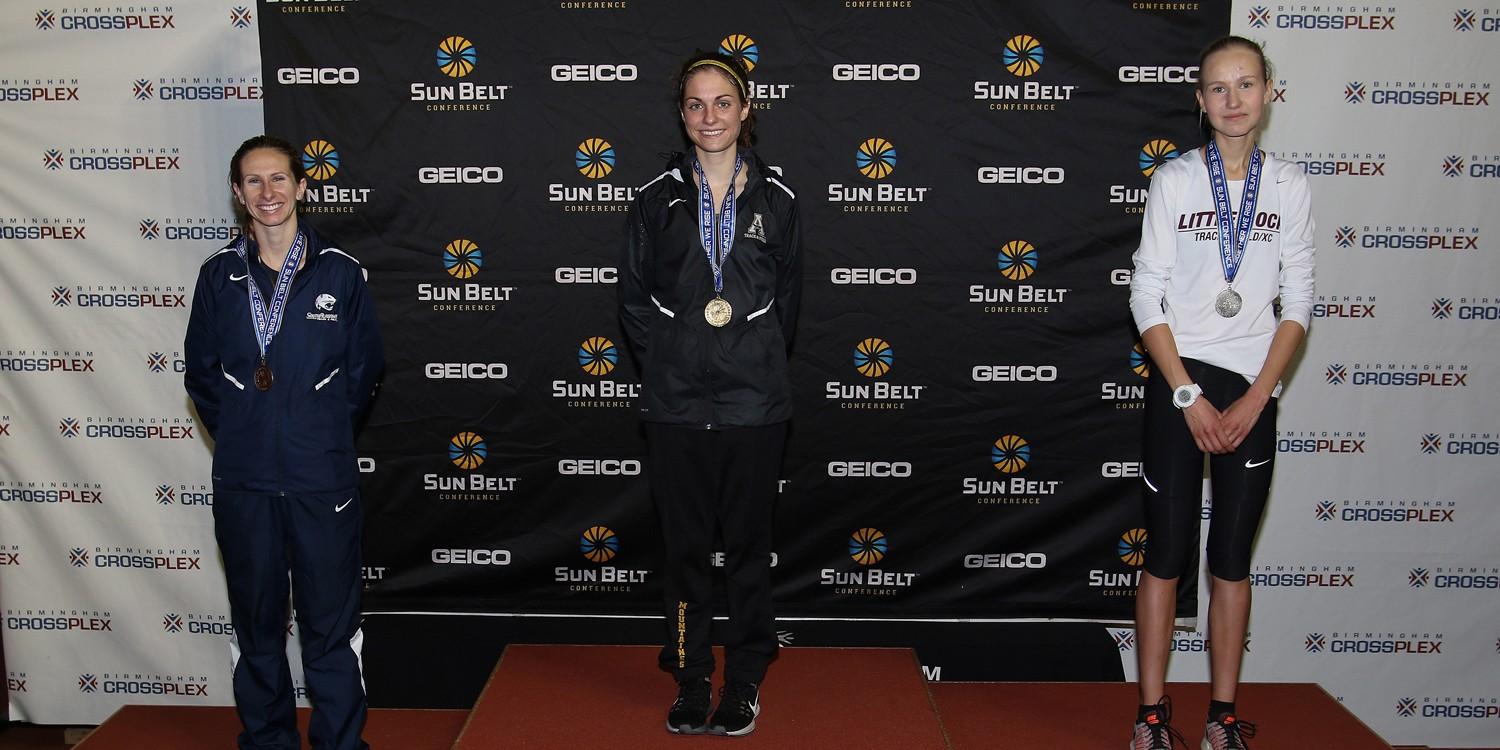 The women’s track and field team at Appalachian State has been working hard all season long to build a legacy as a dominant team in the Sun Belt Conference. That hard work has finally paid off with the Mountaineers capturing the first Sun Belt title in school history.

Both the men’s and women’s track and field teams competed in the Sun Belt Indoor Conference Championships in Birmingham, Alabama, on Feb. 23. The men took home fifth place, while the women finished first and earned App State’s first ever Sun Belt title. The team is hoping to use this win as a springboard into the outdoor season as well as the first step to building a legacy as a strong competitor in this new, more challenging conference, junior sprinter and jumper Darlene Girardeau said.

“I know our athletes want to work for trying to continue this new tradition – this new legacy – that we set in the Sun Belt,” John Weaver, head coach of the Mountaineers’ men’s and women’s track and field teams, said. “Now that we know we can be competitive, we want to keep that tradition alive.”

The outdoor season for both the men’s and women’s teams begins on March 18, with the Wake Forest Invitational in Winston Salem. Weaver said that he hopes that both teams will use the women’s win at the Sun Belt Conference Championships as a confidence booster for the start of the outdoor season.

“[The win] is going to give our athletes, women and men, a lot more confidence in the fact that they can compete, and that being at the top of the conference is not just a dream,” Weaver said. “It’s a reality.”

Weaver said that with the team’s sixth place finish last year, he knew the team was capable of winning the championship within the next couple of years, but it was the team itself that was confident that a win was within reach this year.

“On the Monday night team session, when I told them we were trying to come [to the championship] and be ready to be better than sixth place, hopefully second, and no worse third, one of the ladies on the team stepped up and said, ‘No, you know what coach, we want to win,’” Weaver said. “And by God, if they didn’t do it.”

The team won the title with a total of 101.5 points. This was two points higher than the returning conference champs, Texas State. The Mountaineers were down by six points until the last event, which was the triple jump. Sophomores Kaytlyn Gill and Chelsey Hargrave finished third and fourth in the triple jump for the Mountaineers, which moved the team into first place for the title.

Related: On the right track

The Mountaineers were led by junior runner Tristin Van Ord, who has played a vital role in both the cross country and track and field teams at App State throughout her career as a Mountaineer. Van Ord led the team with 20 points from her two first place finishes in the 3,000-meter run and the 5,000-meter run. She was also named the Sun Belt’s Women’s Indoor Track Athlete of the Year and now has three Sun Belt indoor titles.

These three titles are a few of the many accolades that Van Ord has earned throughout her time on the team. Including her seasons running cross country, Van Ord is a five-time all-conference athlete, is now a five-time Sun Belt Conference champion in indoor and outdoor track, and is a Division I scholar-athlete as named by the USTFCCA.

“There were a lot of multi [event finishers], and this is the first team where I really see a lot of diversity in a lot of different events,” Girardeau said. “But just knowing that I was the only one to finish with three wins is pretty awesome.”

Girardeau’s third place finish in the 60-meter dash earned her a spot in the USTAF Indoor Championships that took place on Friday March 11. At the championships, Girardeau competed against some of the best runners in the country, some of whom are 2016 Olympic hopefuls. Girardeau did not make it past her heat, but said that she was honored to have the opportunity to represent App State at the championship.

With the women’s track and field team coming off of a big win and with two of the athletes having such a strong end to their indoor season, the team seems to be in a good position for the beginning of the outdoor season, according to Van Ord.

“This win is going to fuel the fire for the outdoor track season,” Van Ord said. “Now that we know that we can compete for the win, we’re going to put even more work in going into this outdoor season.”