Biggest crowd of the season helps propel App to victory 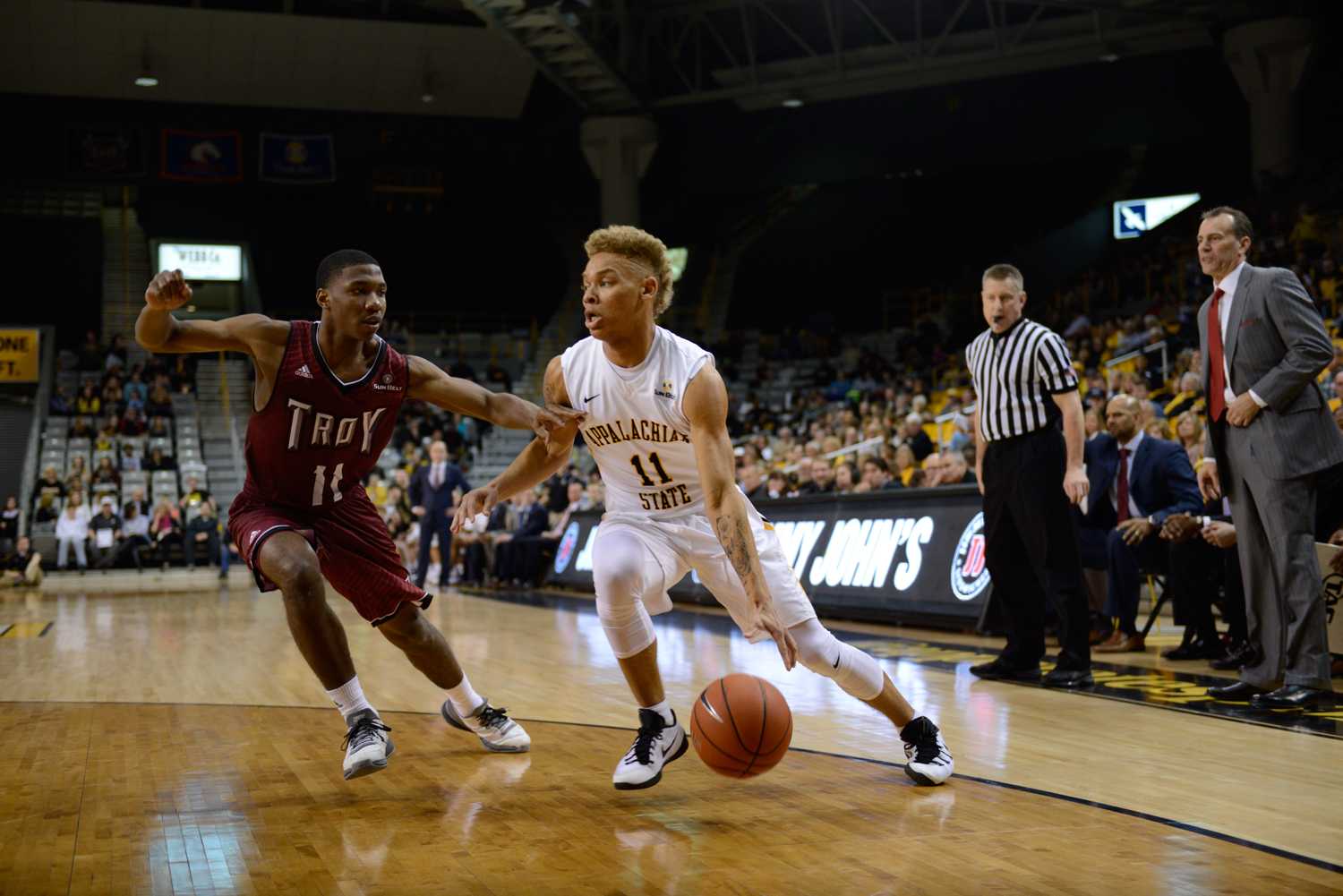 On a night when App State football was honored at halftime with the Camellia Bowl trophy, the men’s basketball team (7-20, 5-11 Sun Belt) overcame their late game woes to end a six-game losing streak, beating Troy 78-74.

The Holmes Convocation Center saw the largest crowd of the season, 2069 people, on Saturday. The atmosphere was electric and ready to help the Mountaineers put an end to their losing streak.

App State started the game with a strong 9-2 run, which would be the Mountaineers largest lead. Senior Frank Eaves hit his first three 3-pointers to score 11 out of the first 17 points for App.

The Trojans finished the first half shooting 53.3 percent from the field, and while App only shot 46 percent, the Mountaineers shot an impressive 7 for 13 from the 3-point range. Eaves led the team with 13 first half points.

The second half was much of the same tight game, but Troy took their first lead of the game 50-49 with 14:48 remaining in regulation.

Over the next few minutes, freshman guard Emarius Logan hit three 3-pointers over the next seven minutes. Logan would go on to surpass his original career high of 13 points, scoring 17 points on 5 for 7 shooting from the 3-point range.

Fox said after seeing Logan not taking an open three earlier in the game, he told him to have confidence in taking open shots.

“He told me not to think about it, so every open shot I had I just took the shot,” Logan said.

App State held a four-point lead with just under 5 minutes remaining and both teams began to struggle shooting from the field.

“I thought we were confident until the last 4 minutes,” Fox said.

In an all too familiar situation, the Mountaineers found themselves in a 1-point game with the Trojans.

“We get tired seeing the same thing happen every game, so we weren’t going to let it happen again today,” Eaves, who finished with a team-high 19 points, said.

“We just kept thinking ‘not again,'” Logan said. “We didn’t want to blow this again.”

Given an open outside look, Shabazz decided to take the ball to the hoop, drawing a foul in the process — a move that he says he wouldn’t have done earlier in the season.

“I think a while back I would have settled for three but I decided to drive and finish it,” Shabazz said. “I was thinking ‘let’s finish this.’”

Free throws gave App a 76-72 lead with 19.9 seconds left and the Mountaineers held on to win for the first time in six games. Shabazz finished with 15 points.

“We won’t give up on each other,” Eaves said. “It helps to know our coaches wont give up on us and that us as players are staying together.”

The Mountaineers are now only two games behind the eighth spot for the Sun Belt Tournament with four games remaining.

“Hopefully we get some confidence now and we can go on and win some games here down the stretch,” Fox said.

App State travels to Georgia next week for a big game against Georgia Southern on Thursday at 7:30 p.m.