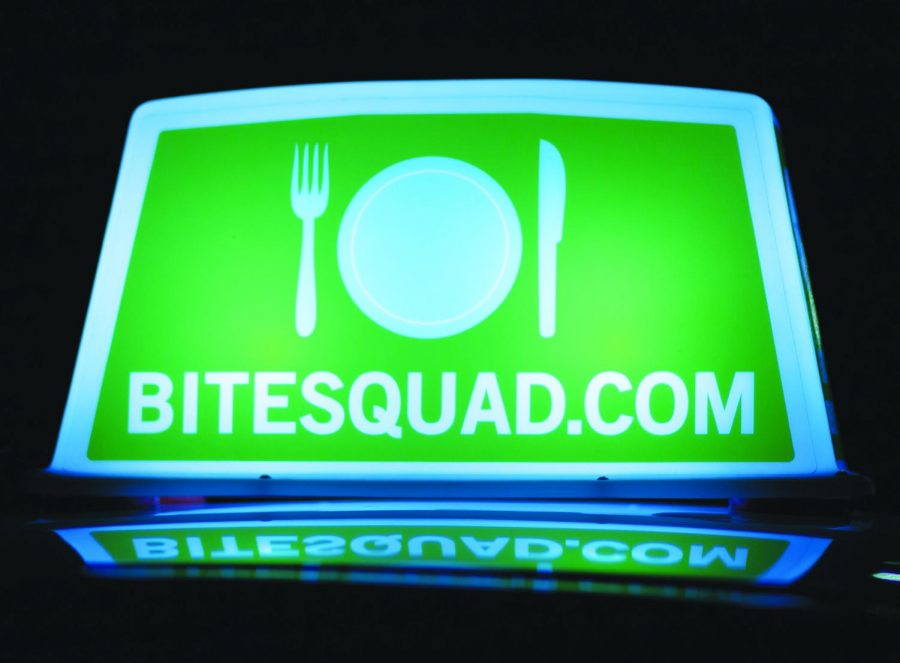 When Boone students came back from their summer break, they were met with a confusing sight. The food delivery company Boone Takeout was replaced with a bright green Bite Squad logo.

“Bite Squad has been on a growing spree and last year we more than doubled our footprint,” said Liz Sniegocki, Bite Squad media relations manager. Bite Squad has 70 drivers in the Boone market and is continuously growing.

Former employees of Boone Takeout who were angry with Bite Squad for taking over and implementing vastly different policies, came together to create Boone Delivery, a locally owned and operated food delivery service, Wilkins said.

Bite Squad is a corporate food delivery service that works in over 150 cities and towns in 18 states around the country, according to its website. The Minneapolis-based organization is a far cry from the former locally owned Boone Takeout system, Wilkins said.

“There can’t be competing food delivery businesses in this town,” Wilkins said. “Neither of them are going to do well.”

In late May, the owner of Boone Takeout sold the business to Bite Squad, Wilkins said.

“We knew the business was for sale, but we didn’t think it was going to happen that quickly,” Wilkins said. “It happened in three months and people were sketched out as to why it was so rushed.”

“Our old owner of Boone Takeout was doing the deal behind the scenes,” Wilkins said. “One of our managers happened to go into the system to look ahead at the numbers for Memorial Day weekend.

“There was a manager block put down for the rest of the year because Bite Squad was buying us. So, we found out about this then, and two weeks later we were out of a job.”

Bite Squad offered jobs to Boone Takeout drivers, and many of the employees decided to switch over.

Some of the employees, like Wilkins, thought there were too many differences between the two companies to switch over and decided they didn’t want to move to Bite Squad.

“One of the biggest things for me was switching to be a W-2 employee,” Wilkins said. “With most delivery services you’re a subcontractor and make cash at the end of every day, but with Bite Squad all tips get put on a paycheck you get once every two weeks, so budgeting for gas is very hard.”

Sniegocki said Bite Squad uses federal W-2 forms instead of contracted employees because the drivers are uniformed, trained and someone is always available to bring the food to customers. As W-2 employees, drivers are eligible for services like workers compensation insurance and payroll taxes.

“There’s always someone available to pick up your food,” Sniegocki said. “They’re going to do it consistently and with quality customer service because they are trained to do so.”

Having corporate headquarters in another state is sometimes challenging for employees.

“I will say that when there is a conflict with an order it is difficult to make adjustments because I have to text dispatch, and then wait for someone to try and get ahold of the customer,” said Jackson Harris, a Bite Squad driver. “I don’t have access to customer contact info until I confirm the order is picked up.”

All Bite Squad orders are dispatched from the company’s headquarters in Minneapolis. The dispatchers manage all of the orders from 60 markets in over 380 cities, Sniegocki said.

For every customer who orders from a food delivery service, a restaurant has to deal with the company as well.

Bite Squad focuses on local, independent businesses when it looks at a new market, Sniegocki said.

“Bite Squad has been built on the backs of local restaurants, not large chains,” Sniegocki said. “We want to bring those businesses the same opportunities that a Chili’s has or a Buffalo Wild Wings.”

Bite Squad has run into issues with local Boone restaurants, even causing Hokkaido and Capone’s Pizza to drop its services.

“Bite Squad is incredibly difficult to get into contact with, mainly because I believe their customer service call center is in Mexico,” said Andrew Donaldson, a manager at Sagebrush Steakhouse. “You cannot physically call their IT department at all and you have to email them, so it takes quite a few days for them to get back to you.”

This lack of communication is difficult, because Bite Squad gives each partnering restaurant its own tablet to use to get orders and know where the drivers are.

“Their software doesn’t work but maybe 20 percent of the time,” Donaldson said. “Bugs like sending in the same order twice or not sending an order in at all has happened multiple times, and getting refunded our money for making the same order more than once is very difficult to do.

“It takes weeks to get that back.”

“Once, their driver came into the restaurant and yelled and cussed at my hostesses in front of actual customers,” Donaldson said. “It took about a month to finally get him banned from my restaurant because every time I spoke to somebody at customer service they told me that they would handle it.

“They never put any kind of note in our account to verify that this specific driver would not return.”

It took Donaldson threatening to pull Sagebrush Steakhouse’s service from Bite Squad for the company to finally ban the driver.

Bite Squad employees are often told to go directly to the restaurant after they receive the food order, despite the food not being ready yet, Wilkins said.

“The tablet tells the customer how long a food item will take, but the actual drivers don’t even get that number,” said Tracey Thompson, an employee at Bella’s Italian. “They just get sent immediately, so they end up sitting at our bar for upwards of half an hour, oftentimes waiting on a calzone.”

Although Bella’s and Sagebrush still use Bite Squad, Hokkaido and Capone’s don’t due to Bite Squad’s refund policy, Wilkins said.

“Customers ordering Hokkaido from Bite Squad were claiming that things were forgotten or weren’t right,” Wilkins said. “Instead of correcting that issue, Bite Squad was just refunding them on Hokkaido’s side, so that the restaurant wasn’t getting their money, even though it was Bite Squad that messed up.”

Unfortunately, not every restaurant has the ability to no longer use Bite Squad when the service is bad.

“In the restaurant industry we are seeing that guest count goes down every year for the last few years no matter the guest check average, so the amount of money a person spends on average, is increasing every year,” Donaldson said. “Our sales keep climbing from previous years but less people are actually going out and eating.

“More people are ordering to-go’s or using a third-party delivery service since it’s so easy. So unfortunately restaurants need to use these services as well to stay competitive.”

To find out how Boone locals felt about Bite Squad, we sent out a Facebook post to the local App State Classifieds Facebook page, asking for people’s opinions and stories. Forty-one responses were received from a variety of people with mixed reviews.

Some customers enjoyed their experience with Bite Squad.

“I use Bite Squad almost weekly and have never had a problem with my order,” said Vitalia Rosevear, a graduate student studying elementary education. “It’s always delivered before the estimated time and I always get my full order.”

However, several of the responses involved frustrating stories about Bite Squad’s customer service.

“My mom came up one weekend to visit me and I had loved Boone Takeout so I thought when they turned into Bite Squad it would be even better,” said Katie Von Dohlen, senior studio art major. “So we decided to order some sushi.

“The bill was probably around $30 and we obviously tipped, because the food was great. A week later my mom called me telling me that for some reason Bite Squad had taken over $1,000 from her account. She was on the phone with them for a very long time, they were giving her a hard time but I’m pretty sure Bite Squad didn’t refund my mom, I think the bank did.”

Bite Squad only delivers from restaurants that are 7 miles from a customer’s house, causing many former Boone Takeout customers to no longer have access to a food delivery, Wilkins said.

“When Boone Takeout would come all the way out to my place (about 15 minutes from the town limit), they would find my place fine,” said Katelyn Carson, a senior psychology major. “But now with Bite Squad I’ve had to drive into town to meet drivers who said they couldn’t find my address.”

Bite Squad also doesn’t take cash, so all customers must pay with a debit card. This is a struggle in a college town where many customers work for tips themselves and only have cash lying around, Wilkins said.

Bite Squad has been in Boone less than a year, so the company is still working out many of the kinks. The longer Bite Squad takes to settle in, however, the more Boone Delivery emphasizes its local roots up to get customers back.

“People here are local-first, small town and that’s what Boone Delivery is,” Wilkins said. “We’re locally owned and operated and actually care if your stuff is right or wrong, and we go out in weather regardless because we know people can’t get out and want to eat.”

At the same time, the corporation has its perks, allowing for cutting-edge technology and an effective marketing campaign, Sniegocki said.

“We’re able to market our restaurants and treat them as partners with the power behind that marketing to push sales for them,” Sniegocki said. “It allows them to increase their business, which brings a boost to the local economy.”