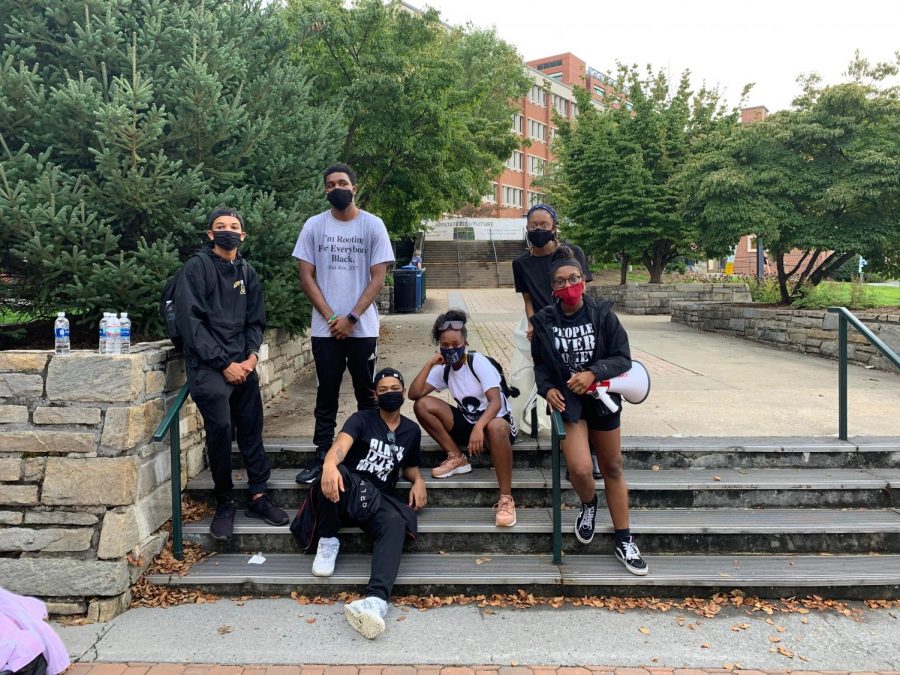 The Black At App State collective at the "Wake The Chancellor" march against injustice Aug. 31. The collective introduced the idea of a public demand tracker to university administration, 27 months away from their 36 month deadline proposed July 2020.

Almost a month following Black at App State’s “Wake the Chancellor” march on Sanford Mall, the group is requesting a written apology from Chancellor Sheri Everts after her response to the protest in a Tuesday statement.

On Aug. 31, the Black at App State Collective led nearly 250 students from Sanford Mall to the B.B. Dougherty Administration Building, where the chancellor’s office is housed. This summer the group made a petition and list of demands in regards to the oppression and trauma Black, Indigenous students and people of color have faced on campus. They also demanded change in areas such as scholarship, curriculum and campus culture. The group says the university has not met their demands.

The day of the protest, App State Police told the group that students still in B.B. Dougherty Building after 5 p.m. would be arrested for trespassing and violating a COVID-19 executive order. At 5:45 p.m. officers wrote citations and threatened arrests. They were dropped.

“Although no arrests were made, the actions of App State Police remind us of the risks Black people encounter when interacting with law enforcement,” the collective wrote in their statement. “Experiences like this can have an incredibly damaging impact on the mental and physical health of Black people.”

Black at App State demanded Everts make a statement through a campus-wide email with “full commitment and transparency around a timeline for implementation” concerning the group’s demands. At the end of the day, she did not give a statement. The Collective wrote that chief communications officer Megan Hayes denied this request on behalf of the chancellor.

The collective says that Everts did not do her job ensuring student’s safety when threatened for arrest.

Bailey Gardin, a member of the Black at App State Collective, said administration knew students were facing arrest and citations.

“The Collective recognizes that the Chancellor and her communications team were willing to let students be arrested for participating in a peaceful march and fighting for racial equity on campus.”

They also accused the chancellor of lying in a campus-wide email, claiming the two have met on several occasions. Black at App State says they have only met once, in July.

At their July meeting, the group claims they were muted when trying to speak to administration and the chancellor. After this, the chat feature was turned off, making the meeting one-sided.

The collective met again with administrators twice in September to discuss implementation of their demands, but the chancellor was not present.

Black at App State mentioned its support for the Plemmons Student Union as a voting site in their statement.

Eric Eller, a member of the Watauga County Board of Elections, wrote a letter to App State Police concerning the PSU voting site.

Eller proposed that Black At App State would cause a dangerous campus environment for voting, quoting from their original July statement.

The group wrote that they would not hesitate to contact the media to further publicize their movement and experiences of racism on campus. Eller took this excerpt to say that “Disrupting the election process would draw substantial media attention, potentially including national media attention. Such publicity could very well attract other, outside organizations whose activities may be far less “nonviolent.”

The collective said his language “attempted to criminalize and invalidate the work that the collective has done to advocate for other students to push his political agenda.”

The collective asked Eller to issue an immediate written apology and resign from his position as a member of the Watauga County Board of Elections.

“The Collective acknowledges that these demands are bigger than us and feel that we have an obligation to advocate for the safety of Black, Indigenous, and other students of color on campus,” Gardin said.

The Appalachian reached out to University Communications, but did not hear back in time for publication.