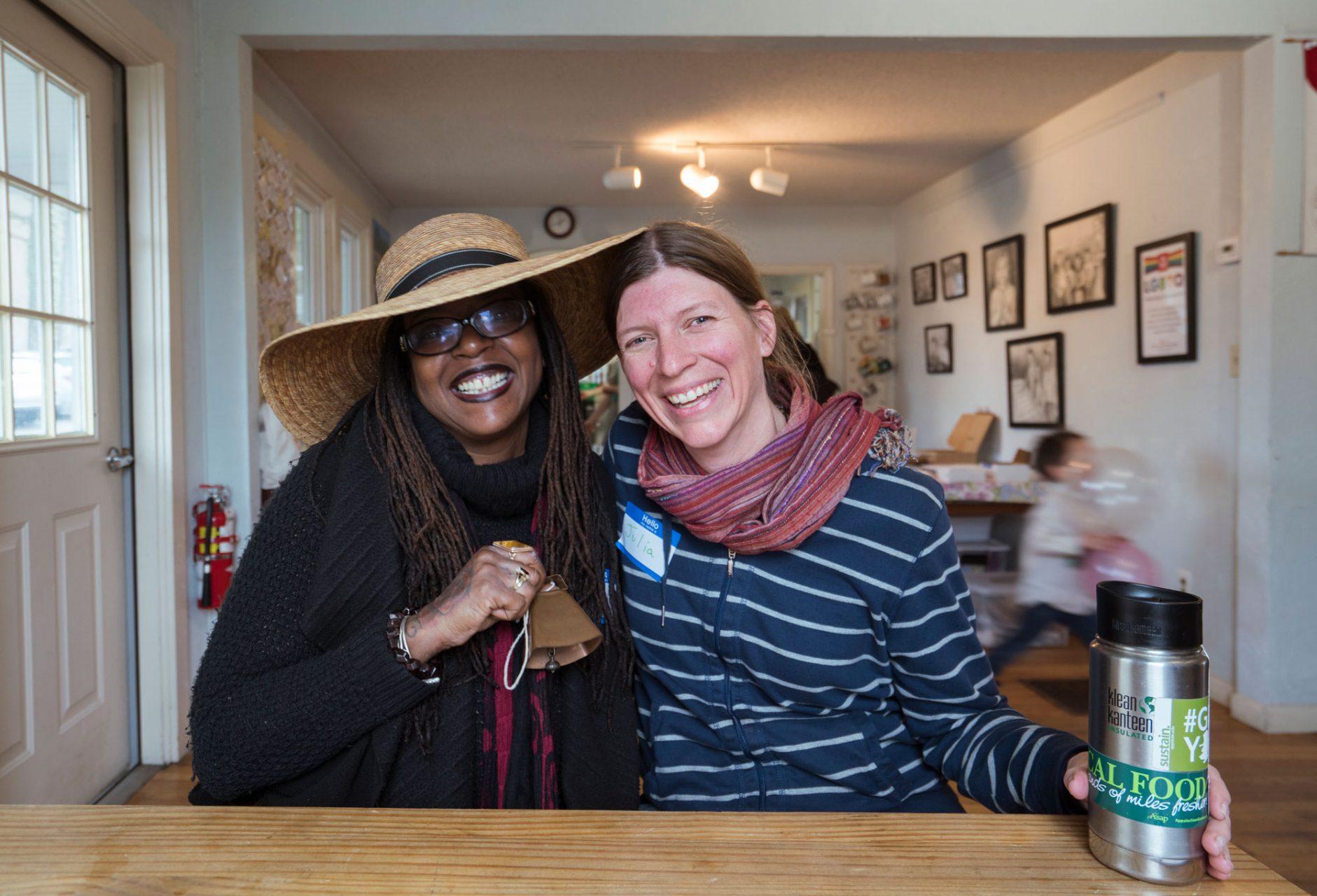 Two members of the BRWIA board, Julia Showalter and Ms. V, at gathering in March.

Blue Ridge Women in Agriculture is an organization dedicated to strengthening the overall High Country food system. While originally the organization was created by female farmers for female farmers, it has since expanded to focus on food equity, farmer support and consumer education.

BRWIA was created in order for female farmers to have their voices heard at the table in terms of receiving adequate regional agricultural support, Courtney Baines, executive director for BRWIA, said.

“Those women farmers who were gathered together in the late 1990s, they knew that they were a big part of the local agriculture system, and historically women have been a big part of feeding people throughout the centuries,” Baines said. “I can’t speak for them specifically, you know, in terms of what fueled them, but from what I’ve been told, they were tired of being told that it can’t be done.”

BRWIA directly advocat es for female farmers through programs such as the Female Farmer Profile Project and the Mary Boyer Sustainable Food and Agriculture Grant.

“Since those early days, we’ve definitely felt committed to being able to tell the stories of the many female farmers in our area,” Baines said.

The Female Farmer Profile Project highlights female farmers throughout the High Country and aims to redefine the image of what a farmer looks like.

“That has had a diverse approach throughout the years,” Baines said. “But the goal is to tell the stories of female farmers in our area who are doing great work and help shine a light on this very real face of farmers.”

The Mary Boyer Sustainable Food and Agriculture Grant is funded through Women’s Fund of the Blue Ridge and allows BRWIA to help farmers with innovative ideas get their projects off the ground, while also educating other producers in the process.

“A requirement for that grant is that the grantees implement the proposed project and they are required to educate their peers, to hold a workshop on their farm,” Baines said. “All people are invited, not just females, but definitely the female leader is showing like, here’s this project that I implemented on my farm, here’s why it’s sustainable in terms of environmental sustainability and economic sustainability and any equitable parts of the project as well.”

While BRWIA has roots in supporting female farmers, their primary focus now is how organizations can effectively connect with the community and provide that link directly to the food system.

“We’re a great connector in that we work with a lot of different organizations and community groups to help build this food system collaboratively,” Baines said. “We’re definitely a connector — a pollinator — in that way too. Throughout the years we’ve helped to incubate budding nonprofits or ideas.”

Some of these projects include the Lettuce Learn program, which supports school gardens across the High Country. With this support, children are able to learn the importance of healthy choices and sustainable communities, according to the Lettuce Learn website.

“It is important to get young people engaged and feel empowered to be able to grow food for their communities,” Baines said.

While the project was originally separate from BRWIA, the organization has since absorbed it.

Dave Walker, the programs director for BRWIA, has been with the organization for the past three years and wrote his masters thesis about first generation farmers in the High Country. From his thesis came the CRAFT program, which connects farmers together to create mentor relationships and support.

“The idea is that it’s a network of peer-to-peer educators and our mission is to cultivate meaningful mentor relationships between aspiring and established farmers,” Walker said. “We create spaces where farmers and aspiring or beginning farmers can hang out and hopefully exchange telephone numbers with someone who is more experienced.“

“You can’t just have a farm tour to build out a local food system. You also need to build out infrastructure for markets so that customers, you know, they learn about the farm on the farm tour but then they have a place to go and buy from the farm, and then you also need training programs for the farmers,” Walker said. “And then there’s this whole food equity piece. And so everyone has an opportunity to buy food from the farmers.”

All of these factors go into building an equitable and vibrant food system, Walker said.

A new part of this food system is the High Country Food Hub, which is celebrating a full year of being live online this month and was created to provide a space for farmers to sell their products.

“Once we had this aggregated space for all of this great fresh produce, it was like, how can we help create another outlet so that consumers can buy this food or access this food?” Baines said.

The Food Hub contains over 500 products from 40 producers and is open from Thursday to Monday for consumers to shop online. On Wednesdays, buyers can pick up their food from the physical Food Hub, at the back of the Cooperative Extension building off of Poplar Grove Road.

As for expanding initiatives, BRWIA is focusing heavily on their Double Up Food Bucks program.

“The concept is pretty simple — for folks that have limited income and rely on SNAP, formerly known as food stamps, they can use their EBT card at the farmers market, and for every dollar that they put on their EBT card, it gets to double,” Baines said. “Local food is more expensive because it’s raised more carefully, it takes more to grow food ethically, and so it doubles the value of their SNAP dollars if they use it at the local farmers market. It’s a great way to allow everyone to have fresh, locally grown foods.”

BRWIA obtained nonprofit status in 2004, according to their website. This allowed the organization to work towards more positive agricultural change in the community.

“When we became 501 (c) (3), when we were established as a nonprofit, it was actually housed within the Center for Appalachian Studies,” Baines said. “We were birthed out of App State in that way.”

Since then, BRWIA has worked closely with App State on a variety of projects, such as the High Country Food Summit, which they have hosted for the past two years. The organization also has a board of 12 members, a majority of which have connections to App State.

Julia Showalter, the chair of the board of directors for BRWIA and a lecturer in the biology department at App, helped develop the seed library housed in the Watauga Public Library through BRWIA and manages all of the sustainable gardens on campus.

The seed library provides a space to store and preserve genetically diverse crops, as well as encourage people to be connected to their food and save seeds, Showalter said.

Baines and Showalter both emphasized the importance of students’ involvement in BRWIA. With a student membership, students can participate in monthly member gatherings, get discounts on workshops and receive monthly newsletter updates about the organization.

“It’s a great place to plug in and share ideas about building the local food system and finding out what we’re doing and just to network,” Baines said. “Just knowing that being a member of Blue Ridge Women in Ag, you’re having a direct impact on the local food system.”

Being a member also means that students are directly connected to their community and their food.

“I think that creating a sense of community is essential for these kinds of programs, and memberships sort of allow people to mix and mingle with other people who have similar passions,” Showalter said. “It’s also a great mixture of community farmers and students, so you get more of a whole picture of what’s going on and what part you can play in that.”