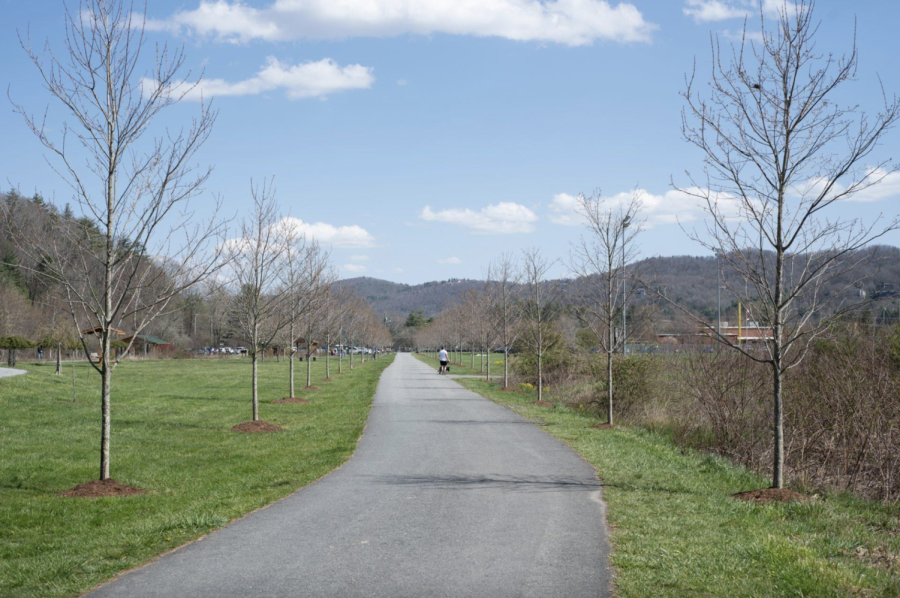 The Town of Boone and App State are laying the groundwork to be carbon free by 2050.

Boone maintains its attraction with the neighboring Blue Ridge Parkway and rolling mountains. In order to preserve this natural landscape, the town has planned steps toward clean energy and air, hoping for a carbon-free town by 2050.

“We take a five step approach to eliminating carbon emissions,” Santucci said. “By 2030, our goal is for municipal operations to be net neutral.”

Municipal operations refers to Boone’s government operations. Net neutral doesn’t necessarily mean zero carbon or greenhouse gas emissions, but if there is still carbon released by the municipal operations, it has to be offset with something else such as planting trees.

The first steps are the “two monsters,” Santucci said. First is to “green” the electricity and energy being burnt. The town intends to purchase 100% carbon emission free energy.

If the budget is approved, Boone will buy 1.6 gigawatt hours in hydropower from New River Light and Power and about 5.3 gigawatt hours in solar energy from Blue Ridge Electric. This will add up to the amount of power the town used in previous years.

The second step is to have no carbon emissions associated with government-operated vehicles, such as police cars and snow plows.

Considering these statistics, most new vehicles purchased by Boone will be hybrid, meaning they partially run off of a battery which is recharged by stepping on the brake of the vehicle and then use gas once the battery runs out.

Along with these hybrid vehicles, electric vehicles will be added into the town’s vehicle fleet and with them will come new installments of charging stations, Santucci said.

Santucci is working on installing a charging system behind town hall for both government electric vehicles and a port for the public.

The remaining three steps of Santucci’s approach involves converting any heating systems in buildings into electric-based systems, tightening buildings so they need to use less energy, and exploring local generators, finding what can run off solar energy and where solar power can be installed.

Santucci explains that “the outreach piece (is) what we need to start doing.” The goal is to make people aware of what’s available so they can “green” their own footprint.

“I know there are plenty of other things around sustainability like recycling and composting,” Santucci said. “But climate change is our biggest threat, so we are really trying to eliminate our carbon footprint. That’s our primary goal.”

“We focus on clean energy goals, climate action, climate justice,” said Lee Ball, the university’s chief sustainability officer. “There is a lot to do as we imagine how to decarbonize our society. You can’t just do it in isolation.”

App State’s switch to carbon free power will begin in January. The plan for this transformation has been in the works since 2016, Ball said.

The recent remodel of residence halls on the west side of campus will aid that efficiency.

These avoided energy costs will include “how much we would spend on energy if we did NOT invest in energy efficiency on campus and across the UNC system,” Ball said.

The chancellor and Office of Sustainability are among the first to drive shuttle-like electric vehicles on campus.

These vehicles are also being looked into by campus mail and AppalCart, who should have their first electric bus by January, Ball said.

“That technology is rapidly advancing and we want to be on the leading edge, be innovative and not be more of a lagger,” Ball said.

The Office of Sustainability also employs 20 student ambassadors, along with voluntary members of GreenAppal, Zero Waste ambassadors and Eco-Reps to engage as environmental educators.

“Their biggest goal is to get people to care and to help people figure out where they can get involved,” said Rebecca Walton, the outreach director for the office of sustainability.

The ambassadors work to set up information stands, encourage composting and talk to Boone residents at events like Earth First Friday to educate about environmental sustainability.

“We love when people come and talk to us, and we love when people send us emails with questions,” Walton said. “We were very intentional about putting everything on the website. We really try to lead people there because they can find all the information they need about renewable energy, who to contact about what, and all the different programs we help to facilitate on campus.”