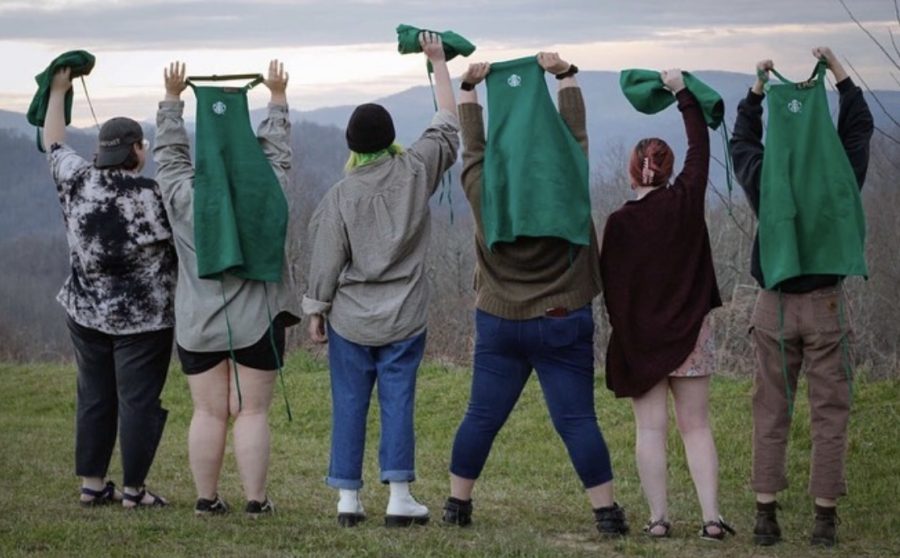 The Council of the Boone Starbucks stand in victory stances holding up their aprons April 30, 2022.

The Starbucks location held its union election where employees vote whether or not they want to unionize Saturday. According to a press release the employees posted on their personal Twitter, the results of the election were 32-2.

As an officially unionized location, the Boone Starbucks location is “entitled to be recognized by the employer as the exclusive bargaining agent for the employees in the unit,” according to the National Labor Relations Board.

The Boone store closed early Saturday to conduct the election, and remained closed for the day in order to count votes. The election lasted three hours.

Brady Aygun, a Boone Starbucks employee and sophomore psychology major, said he could feel the nerves and excitement in the air before the polls opened up.

Grace Marvell is a Starbucks employee and member of The Council of the Boone Starbucks location. The Council, made up of six employees from the Boone location, is a committee made to represent their location and is responsible for organizing the union.

Marvell said a board representative of Starbucks Workers United counted and read the results aloud when the election was over, in front of all the employees who voted.

“It was pretty nerve racking watching them being counted, but definitely very exciting,” said Marvell, a junior biology major.

Olivia Lewis, a Starbucks employee and member of The Council, said as votes were being tallied, she knew there was “no way” they could lose the election with the amount of yeses being called out. She said it was at that moment when she started thinking “it’s over, we did it.”

The employees said crying tears of joy was their first reaction to hearing they won the election.

“When you just hear the word yes, after yes, after yes, like, there’s just so much joy,” said Rachel Eakes, a Starbucks employee and member of The Council. “All of your hard work has finally paid off.”

The employees said it feels “amazing” and “surreal” knowing they are officially unionized and the first location in the state to do so.

“We are defining the path for what it means to be a unionized Starbucks in North Carolina,” Eakes said.

Marvell said the next step as a legally unionized Starbucks is creating a contract to negotiate with the company, which guarantees the employees what they have asked for such as more hours to work and higher wages.

Lewis said the employees of the store will have a meeting discussing what they will put in the contract. She said Starbucks Workers United has an example contract they will use to “create consistency across the country when it comes to Starbucks unions” and will build off of it, adding specifics pertaining to their store.

Lewis said they will also form a bargaining committee, a committee which will be trained to speak and negotiate with Starbucks company representatives.

After a Starbucks in Buffalo, New York was the first location to unionize in December, over 100 Starbucks stores have filled for union elections, according to the New York Times. The employees said they too hope to inspire change in other labor workers, especially in Boone and in North Carolina.

“I want to be to other people in Boone what Buffalo was to us,” Lewis said.

The employees said they greatly appreciate the support they have been given from the community prior and post election. The employees said some customers would go up to them at the register and wish them luck before the election.

“That’s just so exciting, especially before the election,” Eakes said. “It gave me little butterflies.”

Marvell said the community support has been a “huge morale booster” and helped encourage employees to vote who were originally hesitant to do so.