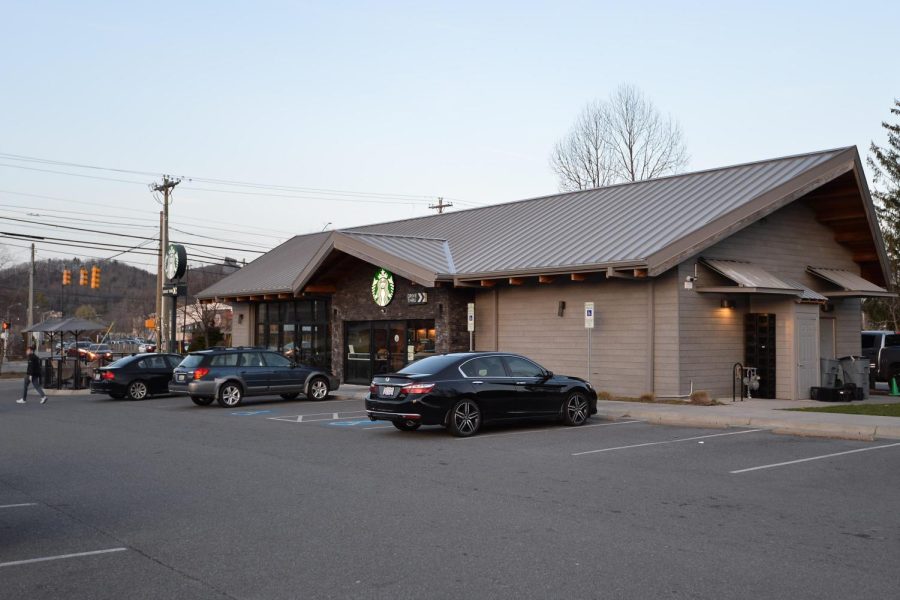 Employees at the Boone Starbucks located on Pride Drive and Blowing Rock Road filed for a union April 4.

The Starbucks employees sent a letter to the Starbucks interim CEO Howard Schultz declaring their plans to unionize April 4.

Unionizing is the process of workers coming together to form a labor union, “an organized group of workers who unite to make decisions about conditions affecting their work”, according to UnionPlus. Workers create unions to earn the right to negotiate with employers.

In the letter, the unionizing employees wrote they intend to support fellow locations that are also attempting to unionize. Their goal is to ensure the company’s employees are “guaranteed the safety and security that they deserve,” according to the letter.

“We are declaring to you, Howard Shultz, and Starbucks Corporation that Starbucks team #47390 is standing together in strength and solidarity to move forward with the process of unionizing,” wrote The Council of the Boone Starbucks location.

Starbucks Workers United, an organization created by a Starbucks location in Buffalo, New York, has updated its social media accounts on the Starbucks locations petitioning to unionize around the country. Over 175 stores, including Boone’s, are a part of the union movement, according to an article by The New York Times. Ithaca, New York, became the first city to have fully unionized Starbucks stores April 8.

The Council of the Boone Starbucks said they planned to unionize since March 3.

Grace Marvell, a Starbucks employee for three years, said members of The Council asked employees in the store if they would be interested in filing union cards during March.

According to the National Labor Relations Board, in order for a location to request a union, they need to receive signed union cards from at least 30% of the workers. The NLRB then conducts an election.

Olivia Lewis, a Boone Starbucks employee for over two years, said The Council received 37 signed cards out of 50 employees, meaning they exceeded the amount required.

The unionizing employees said the main goals they wish to achieve by unionizing are to get more hours, better pay, provide better and longer training, gain customer and employee connections and to be treated as the partners Starbucks “claim we are.”

Rachel Eakes, an employee at the Boone location for two years, said employees were scheduled for as little as eight hours per week and some would ask for more hours. She also said overtime hasn’t been approved since “over the holidays.”

“Seeing one of your friends, one of your fellow partners saying, ‘hey, I can’t pay rent this month’ or ‘hey, I can’t afford groceries this week’ is just so totally dystopian and disheartening,” Eakes said. “It’s gotten to the point where multiple of our partners have second jobs.”

The unionizing employees said their managers have to sacrifice their sick and vacation days to take off so they can allow others to have more time to work.

Marvell, a junior biology major, said during a Starbucks raise period in late January, they only received a 60 cent raise, more than what other employees were granted.

Lewis said although prices of drinks have gone up, none of the extra money goes to employees.

“Once I see a single drink pass $12 an hour, I’m like, ‘that is an hour’s worth of work for something that took me a minute and a half to make,’” Eakes said.

The unionizing employees said the job is physically and mentally taxing for the amount they are paid.

Eakes said they are also unionizing because of the minimal training provided. She said the Starbucks standard of having only 20 hours dedicated to training before beginning work at the busy location is not enough to make “competent baristas.”

“It feels negligent in a way to just under prepare and undersell the amount of work you’re going to be doing,” Eakes said.

Berzina, a senior anthropology major, said if it weren’t for her previous experience being a barista, she would not have been able to work at the store because employee training was too quick and insufficient.

“I fear for people who don’t have barista experience that try to come in too, as a barista, and just learn a huge amount of information in pretty much less than a week,” Berzina said.

Marvell said when they started working at Starbucks, new employees were required to get bar certified to work the bar independently. However, they said it is no longer enforced, leaving new employees unprepared.

“Now you get thrown into the wolves, and that’s about it,” Marvell said.

Lewis said the company has also become “hypocritical” about the values they emphasize.

“They constantly push factors that are profit driven rather than missions that they list on their website,” Lewis said.

Lewis said under the values tab on the Starbucks website, celebrating connections is listed, but isn’t something she feels is true.

“Something that disappoints me as an employee is my inability to connect with my customers,” Berzina said. “I’m unable to make that connection just as Starbucks preaches.”

The unionizing employees also said the corporation emphasizes treating people with respect ‘through the lens of humanity’ but have not felt it pertains to them.

“It’s really funny you’re saying, ‘Oh, we’re going to treat people with respect, with kindness, with dignity’ and then not hold our workers to that same standard,” Eakes said.

Lewis said the store is still waiting for the NLRB to set up the union election so they can be officially unionized.

“I just want to go to work and be excited to go work again. It’s been a long time,” Lewis said. “A lot of us still hope to get that back.”

The unionizing employees said they appreciate all the support they’ve gained from the community, such as reposts, comments and those who have sent letters to the Starbucks corporation on their behalf.