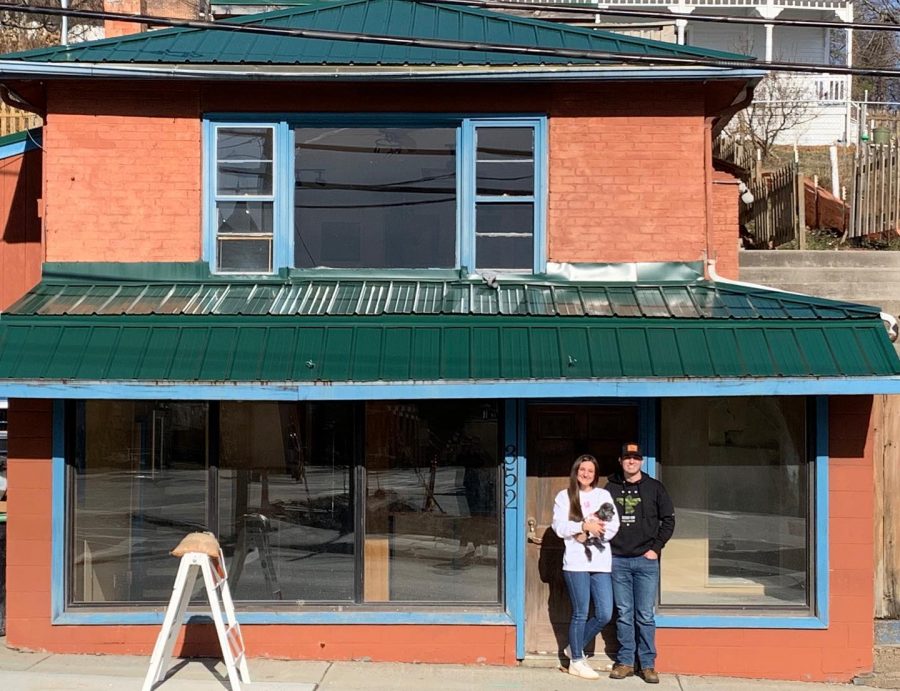 The Northerns stand in front of the new location of Blue Deer on King located next to Fruits, Veggies, and More.

Blue Deer Cookies’ growth comes just two years after opening its popular, seasonal camper on the side of N.C. Highway 321 between Boone and Blowing Rock.

“We have a goal of just to try to make people better, (we) try to love on people because we feel like there’s not enough of it in the world,” said Blue Deer owner Austin Northern. “We can provide an atmosphere that’s inviting for students, locals and tourists, and give people a place to come hang out, have a great product and be able to have their place.”

Northern said the King Street location will serve as Hatchet Coffee’s “premier downtown vendor” with drip coffee and specialty drinks, and Blue Deer on King will also add local specials to its menu.

Hole Lotta Doughnuts of Ashe County will also be sold at the new location, making Blue Deer on King the only doughnut vendor on King Street. Northern added that he hopes they’ll also be able to add sweet breads and muffins as well.

“We’re going to bring a lot of new things to downtown that build on what we’ve established as a camper,” Northern said.

Blue Deer Cookies will keep its camper on N.C. Highway 321 and plans to reopen that location in March, but work is already underway to get the new locations’ doors open by late April.

Blue Deer on King is located at 352 W. King St. in what was BeansTalk Coffeehouse until it closed in 2011. Northern said he wants the new space to take a similar approach to Boone’s “rustic mountain vibe” like its downtown neighbors Lost Province Brewing Co. and Ransom Pub.

Northern’s mother, who is an interior designer, and his wife are working to create a “very clean and very warm” vibe. Right now, they are planning a white exterior with black trim, and the interior will have a similar “Blue Deer vibe.”

The couple attributes much of the original camper’s success to its unique design. The hand-built camper is surrounded by string lights and wooden picnic benches, which many customers have shared on social media. They said they are hoping the same will carry through the design of the new location.

“We understand the importance of marketing and Instagram and trying to do places where people can have an experience, as well as share it (with) friends,” Northern said. “That’s been our biggest draw and helped us get the word out without having to pay for any sort of advertising. It’s just theoretically word of mouth through social media.”

Blue Deer’s second location, which is next to Fruits, Veggies, and More, is just one of King Street’s newest additions. The portion of King Street beyond First Baptist Church is also home to the construction of King and College apartments and a lane-widening process. Northern said he believes this is just the beginning of increased foot traffic from students, locals and tourists further down from other popular spots on King Street.

Though it is the less-developed side of King Street, Northern said he trusts the product will sell itself, no matter the location. He said a lot of people told him the camper was in a “crappy location” between Boone and Blowing Rock, but he stuck to his “philosophy.”

“If we have a good product at a good price, it’ll bring people no matter where you are,” Northern said. “We’re definitely hoping that this place sparks more development.”

Allen Curtis, owner of Fruits, Veggies and More, said after some “desolate” years he is hopeful the new developments will bring more town pride to upper King Street.

“I love that Blue Deer is coming next door,” Curtis said.

While the Northerns and the Blue Deer family say they are excited for the expansion of the business, they don’t want customers to think this means the end of the camper that they started with.

Many customers came to know and love Blue Deer through the camper.

Northern said he plans for the King Street location to serve as a future headquarters for the next adventure ahead for Blue Deer and the couple, whether that’s Chapel Hill, Asheville or somewhere else.