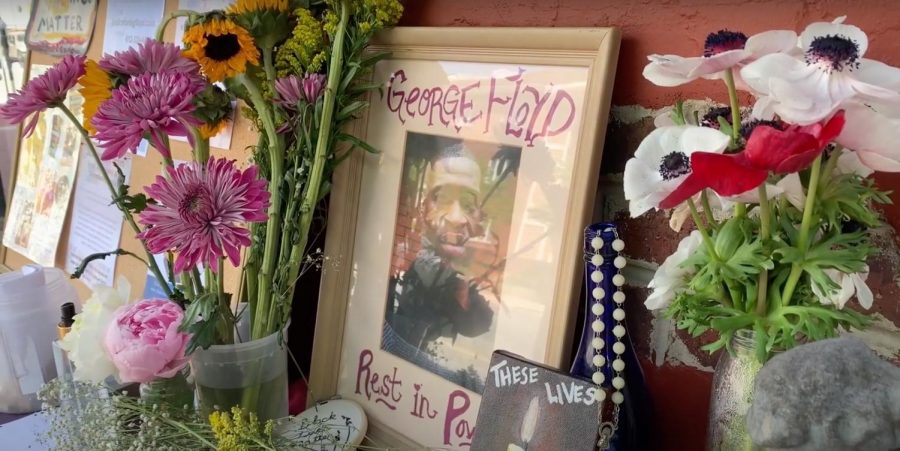 The Altar for Black Lives that stood in Downtown Boone in June. The altar is now on display at the Blowing Rock Art and History Museum in collaboration with Small and Mighty Acts.

The death of George Floyd in May sparked an outcry of unrest across the country, including in the High Country. Small and Mighty Acts, a grassroots organization in Boone, set up an altar on King Street to honor those killed by police brutality in previous months. Since then, the altar has been removed from downtown, but is now available for viewing at the Blowing Rock Art and History Museum.

In honor of Black History Month, BRAHM is collaborating with Small and Mighty Acts to curate and showcase an exhibition around the altar until March 27.

“When the altar went up, we immediately reached out to ask ‘how can BRAHM support you?’” said Willard Watson, program and outreach director.

Watson said that as the only art and history museum in Watauga County, BRAHM has a duty to use its platform for good.

Cara Hagan, founder of Small and Mighty Acts and professor in the dance department, recognized that different art forms may be able to connect people to one social cause. This played a large role in the initiation of the variety of events being hosted.

“With any art event, we want to give people as many ways to enter the conversation as possible. This collaboration has been really great for that, and (BRAHM) have been really open for all of the ideas that have come up,” Hagan said.

In addition to the altar, BRAHM is hosting virtual programming starting with “Songs of Freedom,” an event exploring songs of the civil rights movement with Boone-based artist Melissa Edd.

“In this program, we want to talk about the power of song to unite people … music is a technology people use to convey meaning and process events,” Watson said.

The programming takes place until March 4 and includes a screening of the documentary, “Wilmington on Fire,” a two-part writing workshop and a discussion revolving around the relationship between dance and social justice. Each event features various members of the Boone and North Carolina communities. All of these events are available for free on BRAHM’s website and will take place through Zoom.

A driving force behind this exhibition was not only to show solidarity with the Black community during Black History Month, but to keep the conversation about race going.

“As things happen it’s easy to let things get buried … we need to recognize there are still things happening as part of the undercurrent of our socio-political existence,” Hagan said.

“Our goal is to foster conversation in the High Country around race … where we can actually start talking about the substance and how we can see this in our community,” Watson said.

Visitors can see the altar in the museum for free Tuesday to Saturday from 11 a.m. to 4 p.m., and photographs of the altar are available online. BRAHM is hosting a form on its website for anyone to claim anonymous work they created for the altar.