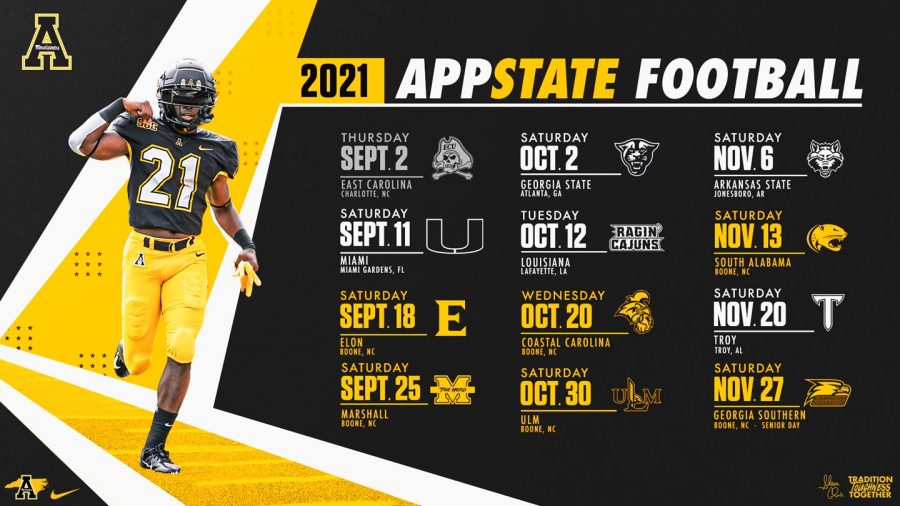 App State football announced its full schedule March 1. The Mountaineers are set to play in two NFL stadiums to open the year, which head coach Shawn Clark described as "a big deal for our players."

App State football released its schedule for the 2021 season. The slate is highlighted by two games in NFL stadiums, a home rematch against former Southern Conference rival Marshall and a date with Georgia Southern on Senior Day Saturday at The Rock.

The Mountaineers kick off their season Sept. 2 against in-state opponent East Carolina at Bank of America Stadium in Charlotte, home of the Carolina Panthers. Next week, the Mountaineers head to Miami Gardens, Florida to take on the Miami Hurricanes at Hard Rock Stadium, where Super Bowl LIV was played in 2019.

“Playing in NFL stadiums each of the first two weeks of the season is a big deal for our players,” head coach Shawn Clark said.

The Mountaineers are set to take on fellow former SoCon opponent Elon in their home opener Sept. 18 at Kidd Brewer.

App State will also face Marshall for the second straight year, this time in Boone, after falling 17-7 last season in Huntington, West Virginia. The game against the Thundering Herd is set for a Thursday – Sept. 23.

“Home games against historic rivals Elon and Marshall add to what is always a challenging schedule,” Clark said.

Oct. 20, the Chanticleers of Coastal Carolina travel to Boone, in a Wednesday game that could play a role in deciding who wins the East division. After the game against Coastal Carolina, the Mountaineers will host the Warhawks of Louisiana-Monroe on Oct. 30.

The Saturday game against Arkansas State on Nov. 6 should be an intriguing matchup as the Red Wolves recently hired new head coach Butch Jones, previous head coach at Tennessee from 2013-17.

Nov. 27, the Georgia Southern Eagles come to Boone for Senior Day. The game will be the first time in eight years that the Eagles have visited Boone on a Saturday. The last time these two teams played in Statesboro, Georgia, the Mountaineers won 34-26.