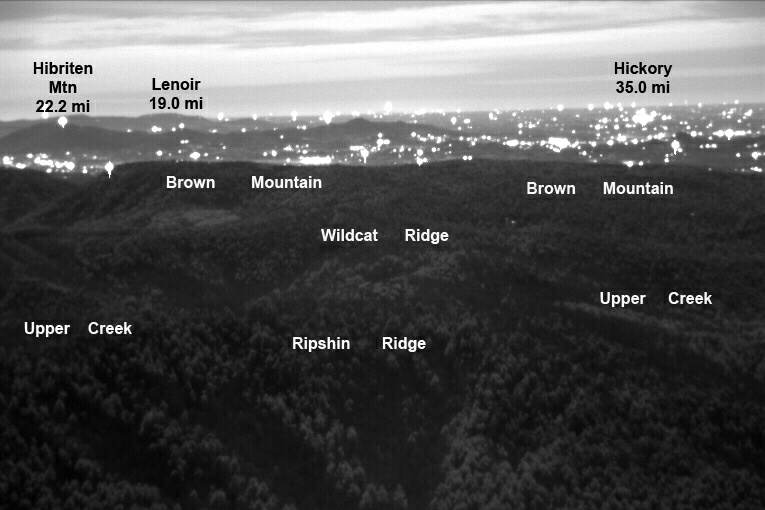 The Brown Mountain Lights have been a community and scientific anomaly for years, bringing locals and tourists alike to view the phenomenon. This image organizes a view of the lights, which are infamously shrouded in scientific and even spiritual uncertainty.

For centuries, the Brown Mountain Lights have stumped scientists and tourists alike, becoming one of North Carolina’s most infamous legends.

Brown Mountain, located in the Pisgah National Forest, is the setting for recurring reports of “mysterious lights” dating back to the early 1900s, according to U.S. Department of Interior.

However, for one App State professor, the answer to the mystery is simple: unexplained scientific phenomena.

Daniel Caton, the director of observatories for App State, said that most reports of the lights are bogus because people don’t understand what they see in the night sky.

“They see some kind of lights, and they leave thinking they’ve seen the lights,” Caton said. “But most people are completely unfamiliar with the nightscape.”

Caton became interested in the lights after a student claimed to have caught them on video.

“We went out to Wiseman’s View during the day to kind of see the lay of the land,” Caton said. “So, we decided to pursue some remote cameras to image the ridge.”

Mike Fischesser said he has worked on the project with Caton for eight years. Fischesser has never personally seen the lights, but he has interviewed 40 people who have.

“Two gentlemen who are reliable witnesses from Morganton saw a bright light as bright as an ATV headlight coming down,” Fischesser said. “All of a sudden, it crossed the Linville river toward the Wiseman’s View overlook.”

Fischesser said two cameras run each night, one recording the south end of the gorge, the other pointed north. Due to the cameras’ angles, they cannot see what happens in the northern half.

After the cameras record their data, Caton edits the collected images into a video and posts them on YouTube.

“Haven’t seen much on that except a lot of human activity, (like) people camping occasionally down in the valley,” Caton said. “You know, nothing really unusual.”

Caton has appeared in several documentaries from “Discovery Kids” and a film called “Alien Abduction” due to his research on the lights, according to his biographical sketch. His office, packed with papers, magazines and folders on top of a desk with seven white computer monitors creating an “L” shape in the corner of the room, acts as a backdrop for most interviews.

There have been sightings of the lights in North Carolina for centuries. Frances Casstevens wrote in his book, “Ghosts of the North Carolina Piedmont,” that stories about the lights were told by the Cherokee as far back as A.D. 1200.

“The Cherokee have a legend about a great battle that was fought that year between the Cherokee and the Catawba Indians near Brown Mountain,” Casstevens wrote. “The Cherokee believed that the lights were the spirits of Indian maidens as they searched over the centuries for their dead husbands.”

Casstevens wrote that the lights are also attributed to “ghosts doomed to walk back and forth across the mountain for all eternity,” and the “spirit of a slave searching the woods for his master.”

The earliest account of the Brown Mountain Lights was published in The Charlotte Daily Observer on Sept. 23, 1913, according to George Mansfield, who investigated the lights for the U.S. Department of the Interior in 1971. Mansfield wrote the lights were seen by members of the Morganton Fishing Club who were “laughed at and accused of seeing things at night.”

“Some have thought that these lights were of supernatural origin; others have dreamed that they might indicate enormous mineral deposits,” Mansfield wrote. “Many who have not had such visions have looked upon them as a natural wonder.”

In his report, Mansfield wrote that D.B. Sterrett, a member of the U.S. Geological Survey, was sent to observe the lights and determine their origin. Mansfield reported that Sterrett declared the lights were nothing but “locomotive headlights” seen over the mountain from “neighboring heights.”

“I don’t think these people have any reason to lie,” Caton said. “They saw something they didn’t understand.”

Caton said that he thinks that 95% of reports or more are bogus. However, Caton said he believes the sightings of the lights that can’t be explained as light pollution could have a scientific explanation.

“Those are probably ball lightning,” Caton said. “We don’t know how nature makes it, but it’s been documented for more than a century.”

Associated with thunderstorms, ball lightning is a spherical phenomenon that appears for only seconds, moving independently through the air.

Caton said he has a theory that Glenville Gorge produces ball lighting naturally, but is unsure what triggers it.

“Our thought was, ‘we’ll catch some, and then we’ll correlate it with other phenomena of the weather, geologic activity and atmospheric magnetic activity,’” Caton said.

Caton said after observing the lights for several years, there are only two incidents he could not explain. The first took place in July 2016.

“We had the cameras catch something that appeared over about 20 minutes and have no real explanation for that,” Caton said.

Caton said the incident was brief, and the light he had seen was almost like a flash exposure in the valley.

“I don’t know what it was, but it wasn’t really that bright firework-like thing that people describe,” Caton said.

Caton had a separate encounter while returning from Asheville for a project, but he said he found an explanation for what the object was. Caton said the object appeared to be brighter than Venus, but since the object was not moving like an airplane, Caton believes it was an iridium satellite or a meteor.

After years of researching the lights, Caton said he wants to know what they are. That way, he can explain them and predict the conditions that make them appear.

“When you don’t see anything, it becomes like Einstein’s definition of insanity,” Caton said. “Good scientists should always be a skeptic. They need to be skeptical about their own work. I may be beyond skeptical now; I may be cynical.”