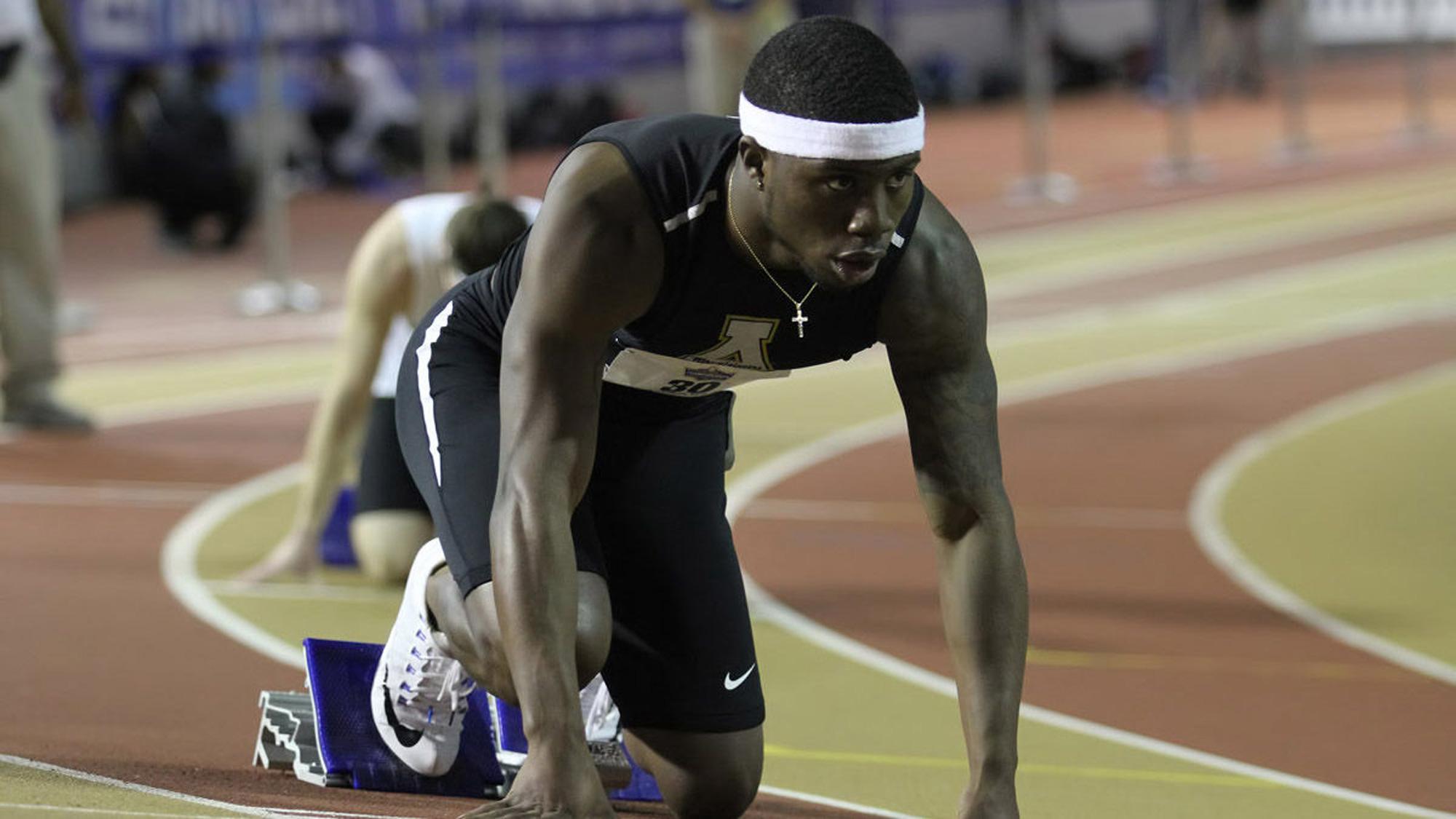 Senior Will Buckley waits for the signal to start the race during an indoor track meet.

Note from the editor: A previous version of this story listed times as minutes instead of seconds. The mistake has been corrected to the proper time and format

Two years ago, during App State track and field senior sprinter William Buckley’s sophomore year, he caught others’ attention with his speed. As this outdoor track season heats up, Buckley has been proving he can still compete at that high level.

Posting the fifth fastest 100-meter dash in the Sun Belt in 2015, running it in 10.30 and the seventh fastest 200-meter, running a 21.01, getting back to this level of success has been Buckley’s goal since then.

“Right now, it’s about going back to the things I did before, and thinking that I’m at the bottom trying to work my way to the top,” Buckley said. “Every day in practice, and the meets, I look at it that way, and every time I step on the track, I try to compete that way, that I’m at the bottom trying to compete to the top. I have a lot of great teammates that push me to do that, and a lot of support from Coach [Weaver] pushing me to do that.”

Buckley’s teammates have joined in on the success. One teammate in particular is doing as well as anyone around. Freshman sprinter Jordan Johnson has chased success along with Buckley at recent competitions. Jordan finished sixth in the 100-meter in one of their most recent meets, while Buckley came out on top, running his fastest time of the year, a 10.47.

Both have pushed each other to do better, leading the Mountaineers in the sprint events. This type of motivation from a teammate has helped Buckley make a push toward the top of the Sun Belt.

Johnson hasn’t been the only one providing Buckley with a push to get better. Track and field head coach John Weaver has had as much impact as anyone, always pushing Buckley to return to the things that once made him great.

“He’s just realizing that he’s got to do things a little bit better,” Weaver said. “He’s mentally more prepared. I think he had a great breakthrough to get back to where he needs to be when he broke the [200-meter] indoor record. He’s now realizing he has to do the things necessary that made me such a good sprinter my sophomore year, he has to get back to that stuff.”

“I think in the future it’ll be a different story, and we’ll talk about what I’ve done, and not what I haven’t done since my sophomore year,” Buckley said.

All of this success has not come without change. Buckley has had to make changes to his life that include his diet and his mindset. These changes have helped him make strides towards his goals that will place him along runners from across the country, not just the Sun Belt.

“Treating practice differently, eating differently, making sure I’m hydrated, things like that,” Buckley said. “Things that I did before, and I kind of slacked off on and got complacent, just trying to have a different mindset all around.”

As far as goals for the end of the season, both Weaver and Buckley agree that the NCAA championships in Oregon are the end goals. Both understand what it takes to get to that level.

“That’s what we prepare for all season, anything other than that would be a failure,” Buckley said.