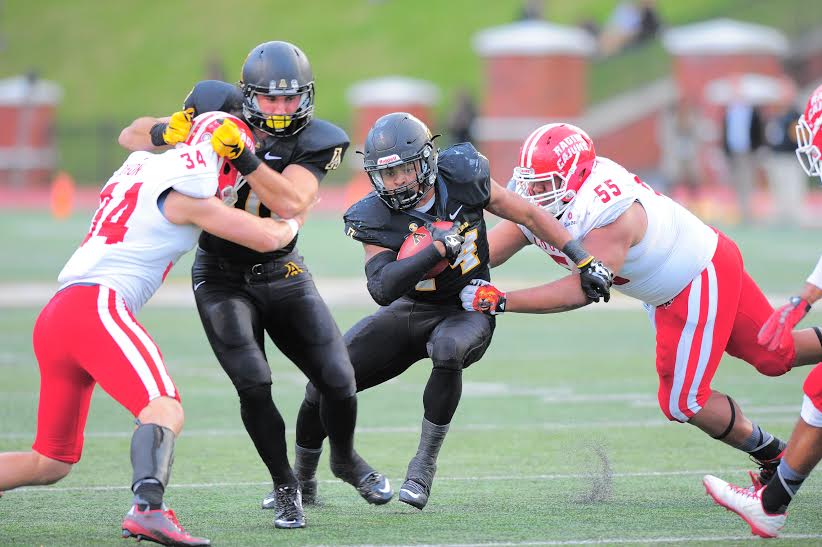 Running back Marcus Cox sheds a tackle during a carry against Louisiana Lafayette Saturday. The Mountaineers defeated the Ragin' Cajuns 28-7 to improve to 9-2 on the season. Photo courtesy of Appalachian State athletics/Keith Cline

The Ragin’ Cajuns were no match for the Apps on senior day as the Mountaineers scored a touchdown in every quarter en route to a clinical 28-7 dismantling of Louisiana Lafayette.

Marcus Cox decided that senior day was also going to be a record setting day for the junior running back. Cox ran in a 9-yard touchdown at the 9:34 mark in the first quarter to give the Mountaineers an early 7-0 lead.

With the run, Cox went over 1000 yards on the season, his third consecutive 1000-yard season. Cox is the first player in App State history to run for over 1000 yards in each his first three seasons.

Cox would add another touchdown score, rumbling in from the 1-yard line to cap a 15-play, 80-yard drive that lasted 6 minutes and extended from the end of the first quarter into the second. The drive tied a drive against Idaho earlier this season for the longest drive of the year for most plays in a single drive.

Coming into the day with 6 touchdowns on the year, Cox was able to increase the number exponentially in the early parts of the game. Cox rushed for 78 yards on 22 carries.

Cox and company weren’t the only ones bringing it, as linebacker John Law and defensive end Ronald Blair, along with the rest of the Mountaineer defense, were able to hold Lafayette scoreless in the first half. Both Law and Blair were able to sack Cajun signal-caller Brooks Haack on separate drives, stopping the Cajun attack in its tracks.

The sacks were Law’s fourth on the year and Blair’s sixth. Both rank in the Sun Belt top ten for most sacks on the season.

Haack struggled for the day, going 13-22 for 128 yards. The Cajuns played three quarterbacks in total, with second-stringer Jalen Nixon seeing time and completing one pass for 16 yards. Third stringer Jordan Davis went 7-7 through the air for 60 yards

Linebacker Eric Boggs also got in on the action, recording two sacks on a Lafayette drive in the third quarter to force the Cajuns into a punting situation. Boggs also had a sack in the first quarter, giving him three for the game, his season total.

Overall, the Mountaineers recorded six sacks on the day.

Head coach Scott Satterfield approved of his defenses effort, offering praise for his teams sacks.
“We did a really good job of applying pressure, and we were able to prevent the long completion when we weren’t able to get home with the blitz,” Satterfield said.

Redshirt freshman running back Jalin Moore joined Cox in the scoring column, busting a 54-yard scoring run with just under 6 minutes left in the third quarter to boost the Mountaineer lead to 21-0. Moore would end up with 105 yards on just 13 carries.

“I got to give the credit to the guys up front, they made that hole…I just saw the hole and hit it,” Moore said of his 54-yard score.

The rushing touchdown was Moore’s third of the season, good for third-most on the team behind Cox’s eight and quarterback Taylor Lamb’s four.
Taylor Lamb was able to get himself in on the action, completing a 2-yard touchdown pass to redshirt junior Michael Moll with 6:34 remaining in the game. The passing touchdown was No. 27 on the season for Lamb, and Moll’s first of his career.

It was only Moll’s second catch of his career. Moll, who has chosen to forgo his final year of eligibility, was honored before the game along with the rest of the Seniors.

The Ragin’ Cajuns were able to get on the board, albeit in garbage time, after quarterback Jordan Davis was able to break free for a 20-yard touchdown scamper with under a minute to go in the game.