Did you know income inequality is correlated with worse health outcomes? In the 1990s, epidemiologist Michael Marmot found that the lowest-paid civil service employees in Whitehall, England had a cardiovascular mortality rate three times higher than the highest-paid employees. This study controlled for negative behavior, like smoking, and found that despite access to universal health care and other relevant variables, lower-paid employees still had much higher mortality rates. So what causes this discrepancy and can income inequality predict where COVID-19 deaths happen?

Unless you failed biology in high school, you probably know humans are animals. Thus, there could be an animalistic aspect to the inequality effect on cardiovascular mortality. In 2005, Stanford neuroendocrinologist and primatologist Robert Sapolsky published a paper about the influence of social hierarchy on baboons and other primates’ health. Sapolsky found that animals that are stressed for prolonged periods of time undergo neurobiological changes. One chemical activated during stress is called glucocorticoid, which is responsible for repressing your immune system. In short bursts, like when running away from a cheetah, this chemical is useful; however, glucocorticoids are toxic if stress is prolonged. To make matters worse, chronic stress has been shown to alter the mind and potentially cause neurological damage.

So is this applicable to humans? Yes and no. According to Sapolsky, humans are not hierarchical in a linear fashion. Instead, we are frequently hierarchically separated among different activities. For example, someone may be a dishwasher, but also a scout leader for his local troop. The most valued action will influence your internal standard and affect your health outcome. Thus, our inner perception of ourselves affects our health outcomes. To wrap this all up, our feelings about being poor affect health outcomes more than actually being poor.

How is feeling poor determined? In his 2008 book “Predictably Irrational,” cognitive psychologist and behavioral economist Dan Ariely offers a provocative answer – our relationships with others. The example Ariely uses is chief executive officers’ pay before the 1990s. According to Ariely, when CEO pay was made public, many CEOs realized they were paid less than others. These CEOs demanded higher compensation, which caused the CEO pay to balloon out of proportion in relation to other employees. Mind you, none of these CEOs were actually poor prior to CEO pay being made public. Rather, they felt poor when compared to other CEOs who were making more money. So, income inequality may affect health outcomes not because people are actually poor but because they feel poor when compared to people living close by. Sapolsky’s paper found that neighborhoods with more income inequality have worse health outcomes for people in the bottom of the wage grouping since the inequality affected their immune response. Now, let’s see if Sapolsky’s hypothesis affects statewide COVID-19 death data.

We will analyze states’ deaths per million, income inequality calculated by the Gini coefficient, a measure of income inequality, poverty, smokers, obesity, mask requirements, education, urbanization and poverty. What we want to see is if these factors contribute to the death rate. When all these variables are analyzed statistically, we find something shocking: with the exception of the Gini coefficient, none of these variables augment the death per million. Using a statistical tool known as the F-test, we can restrict the model to only include the Gini coefficient. We find that there will be an additional 166 deaths per million for every 1 point increase in statewide inequality. Depicted below is the scatterplot showing the relationship: 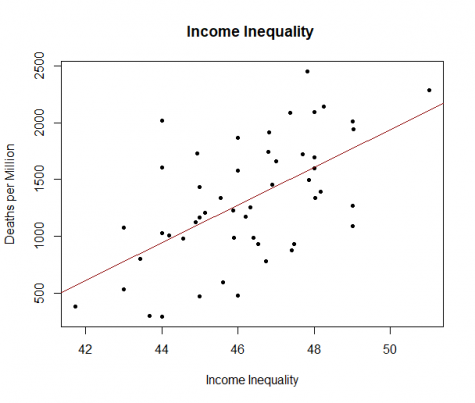 Now, let’s predict some real data. According to our data gathered, the most unequal state is New York, while Alaska is the most equal state. The model predicts that Alaska will have a death per million of 564, while New York will have a death per million of 2,107. New York’s real-world death per million is 2,284, while Alaska’s is 379, meaning that our model underpredicted New York’s death count by 8% and Alaska’s death count by 49%. Remember, this model did not explain all data: only 32% of the data is explained, leaving a whopping 68% unexplained.