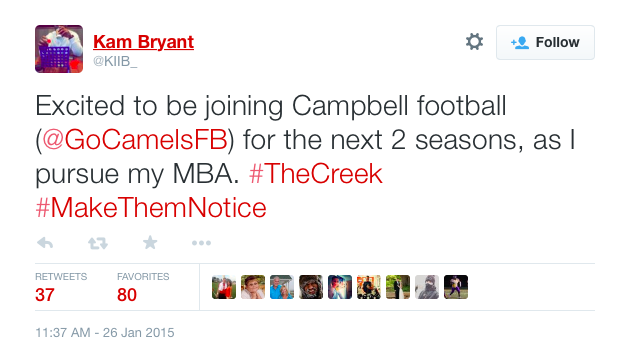 Former App State quarterback Kameron Bryant announced Monday that he will play football for Campbell University next season while he pursues his MBA in business administration.

Bryant, who is set to graduate in May as a risk management and insurance major, broke the news to his Facebook followers with a post attached to a picture of Campbell’s football field at Barker-Lane Stadium.

“Excited to be joining Campbell University Football for the next two seasons as I pursue my MBA #MakeThemNotice,” the post read.

Bryant has at least one more year of football eligibility and once he starts at Campbell, he will file a formal application to the NCAA to receive an extra year of eligibility due to an injury he suffered in 2012.

Bryant, a native of Cary, North Carolina, attended Panther Creek High School before coming to App State and being redshirted as a freshman in 2011.

As a redshirt freshman in 2012, Bryant took over the backup role to starting quarterback Jamal Londry-Jackson during fall training camp and made his collegiate debut in the fifth game of the season against Coastal Carolina.

In his debut, Bryant rushed five times for 24 yards during that game, but suffered a severe knee injury at the end of an eight-yard scamper. Bryant underwent surgery that ended his campaign after 13 snaps.

The 2013 season was smoother for Bryant, however, as he took the reigns as starting quarterback five games into the season and went on to start the final eight games of the season. Bryant proceeded to complete 71.2 percent of his passes that season, breaking the previous record of 69 percent set by Armanti Edwards in 2009.

Bryant continued to set records that season, setting a program record for passing yards as a sophomore with 2,713 which was 712 yards more than the previous record set by Londry-Jackson in 2011. That season, Bryant also led the Southern Conference in completion percentage and passing efficiency (151.1).

In App State’s first season in the Sun Belt, Bryant started the first two games of the season against Michigan and Campbell, but faced some struggles.

The Mountaineers started the season 1-1 and Bryant, usually fleet of foot, rushed seven times for -9 yards in the first two games. Through the air during that span, Bryant completed just 18 of his 36 passes for 207 yards and three touchdowns while also throwing one interception.

Lamb, who started App State’s final 10 games, notched a 6-4 record as a starter, including six-straight wins to close the season. Lamb finished with 2,381 yards, 17 touchdowns and nine interceptions on the season.

“Football was up and down for me here,” Bryant said. “It was a great time. The school here has been great to me.”

Bryant joins a Campbell team that is coached by former Carolina Panthers safety, Mike Minter. Minter has coached the Camels for two seasons.

Minter’s Fighting Camels finished 5-7 overall and 4-4 in Division I Pioneer Football League. The Camels also lost to the Mountaineers in a 66-0 rout in which Bryant started, but was pulled when the points piled up.

“I considered five to ten different schools,” Bryant said. “Campbell being 45 minutes away from my dad’s [home] made it a good fit. Coach Minter and the whole coaching staff made me feel appreciated. I was happy to get down there and make it official.”

Wolf, a native of Stanley, Virginia, played in 11 games last season for the Camels, throwing for 1,483 yards and 10 touchdowns compared to nine interceptions. Wolf also completed 61.9 percent of his passes.

“I still really want to play football,” Bryant said. “[At App State], I wasn’t the guy that was going to do that, so I had to explore other options. Campbell will be a good option where I have an opportunity to play.”

The Mountaineers kick off their season Sept. 5 in Boone with a showdown against Howard. Bryant and the Camels will begin their season with a home game on Sept. 3 against Pikeville.

“With all that, I’m just excited to have an opportunity to get a chance to play, go down to Campbell and show my stuff,” Bryant said. “[Campbell] really invited me in with open arms. They made it clear that they really see me playing and helping the program. I’m excited it’s a program on the rise like that. I like how they’ve changed the culture down there. I want to be a part of that.”