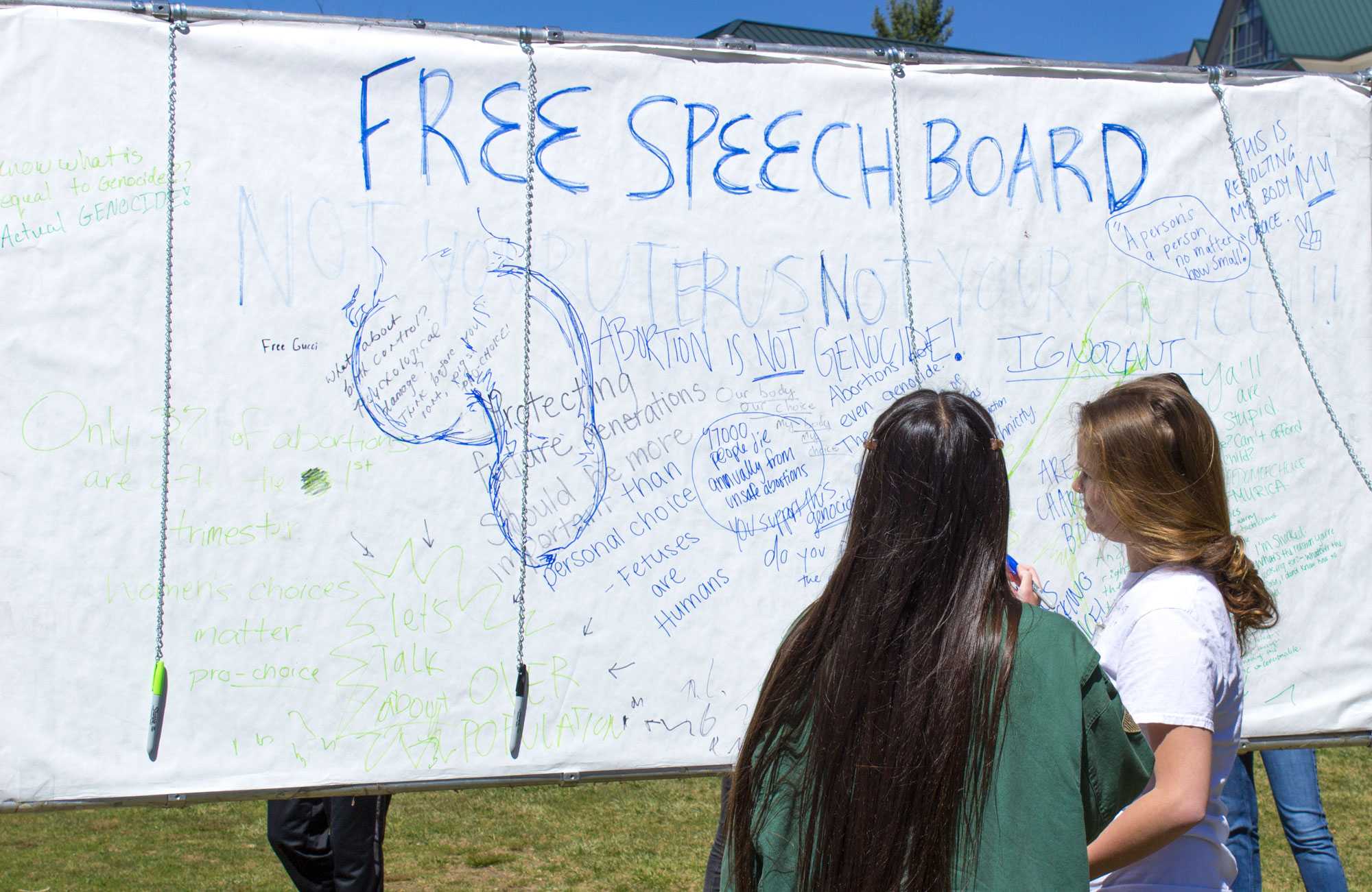 Free speech board that was on Sanfrod Mall during an anti-abortion protest back in march. The protest was held by an organization called AbortionNO.

Over the summer, The North Carolina General Assembly passed a campus free-speech bill, turning it into law and calling into question the legality of protests of speech on campus. The bill was modeled after a bill from the Goldwater Institute, an Arizona-based conservative think tank.

House Bill 527 passed the North Carolina House by a vote of 80 to 31 and by the North Carolina Senate 34 to 11. It was presented to Gov. Roy Cooper on June 29 but was not signed or vetoed in a month’s time. Therefore, the bill became law on July 31 and became effective on June 30.

The bill will discipline anyone under the jurisdiction of the university who “substantially disrupts the functioning of the constituent institution or substantially interferes with the protected free expression rights of others, including protests and demonstrations that infringe upon the rights of others to engage in and listen to expressive activity.”

This is if the expressive activity has been scheduled in compliance with the law or is located in a nonpublic forum.

Along with these new restrictions, the law will establish the Committee on Free Expression, a group of 11 individuals appointed from the Board of Governors that consists of its own membership.

The Committee on Free Expression will report once a year to the public, the Board of Governors, the Governor and the General Assembly with the first annual report due on Sept. 1, 2018.

In this report, the committee will present any barriers to free expression on North Carolina university campuses, how the administration is handling these barriers and any criticisms the committee sees fit to include.

The law, co-sponsored by Rep. Jonathan Jordan of Watauga County, was modeled after legislation called the “Campus Free Speech Act,” written by the Goldwater Institute, a conservative think tank.

The reports cited in the law are the same cited in the Campus Free Speech Act, and a fair amount of the language in the bill is taken verbatim from the Goldwater Institute’s bill. According to a report in The News & Observer, similar legislation is pending in six other states.

The Goldwater Institute, which was called “a watchdog for conservative ideals” in a report in The New York Times, was established in 1988 and named after the late Barry Goldwater, a widely known conservative and former U.S. senator from Arizona.

Goldwater’s mission statement reads, “The Goldwater Institute drives results by working daily in courts, legislatures and communities to defend and strengthen the freedom guaranteed to all Americans in the constitutions of the United States and all fifty states.”

According to the Goldwater Institute website, other reforms in education it supports are vouchers for charter schools, education savings accounts and tuition tax credits.

Democratic Rep. Verla Insko of Orange County said, when debating the bill with the rest of the education committee, that she felt that universities were already doing a good job to promote free expression on campuses.

“We don’t have any long-standing free speech issues on any of our UNC or community college campuses,” Insko said. “The President of the University system and the chancellors at each campus are fully competent to resolve free speech issues at the local level.”

She also said that the studies cited in the law pointed straight to the Goldwater Institute, an organization that she called not a neutral institution.

“The Goldwater Institute is a proud, conservative think tank. It supports and promotes a libertarian, conservative ideology,” Insko said. “I have no problem with the Goldwater Institute. I do have a problem with a bill that is presented as promoting neutrality when the goal of its authors is to promote an extreme political position. I would not support an extreme left of center group doing the same thing.”

Regarding this criticism from Insko, Jordan said that many parties were involved in the final draft of the law.