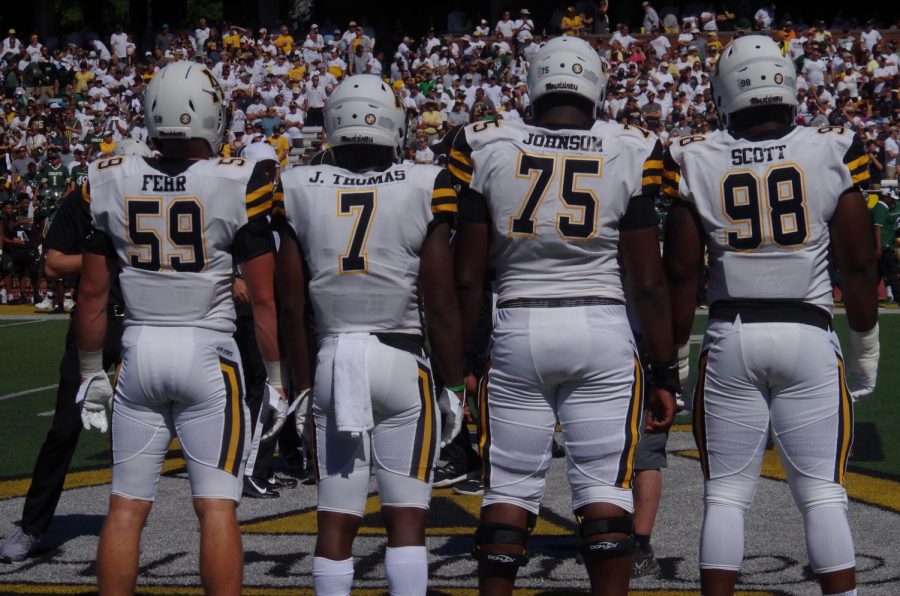 Individual stats are nice and all, but App State football captain and senior defensive back Josh Thomas understands the importance of putting team before self.

“We have a saying, ‘one for eleven, eleven for one.’ If we all play together we can beat anyone,” Thomas said prior to the start of the season.

Thomas is one of three permanent captains for App State football this year. The other two include senior linebacker Jordan Fehr and senior offensive lineman Victor Johnson.

“We will see as we progress how these guys will lead our team. They are doing a very good job so far, but they have to continue that,” wide receivers coach Pat Washington said about the trio of leaders.

So far, the Mountaineers have had success under their leadership, starting the season 2-0. Thomas and Fehr have recorded 13 tackles each in the first two games, and Johnson has provided solid blocking for an explosive offense that has scored 98 points in two games. Johnson is dealing with a lingering ankle injury this year, but it has given him an opportunity to show his teammates how to face adversity.

“Vic has been a great mentor for me for the last two years,” Hannon said. “He’s very vocal, someone you can lean on. He’s so experienced, you watch him and know he loves what he’s doing.”

Winners since stepping on campus, all three seniors were part of Sun Belt championship teams the past three years.

Last year, Thomas was a key member of the “Legion of Boone,” App State’s daunting secondary, starting all 13 games at free safety.

Fehr was third on the team in tackles last year and was named a first team all-Sun Belt selection.

Johnson has protected the App State quarterbacks’ blindsides for the last three years at left tackle, and was named to the Sun Belt all-first each of the past two years.

The three captains know it is their duty to lead the team at all times, and that starts at practice.

“You have to show up all the time, you have to set an example for everyone,” Thomas said.