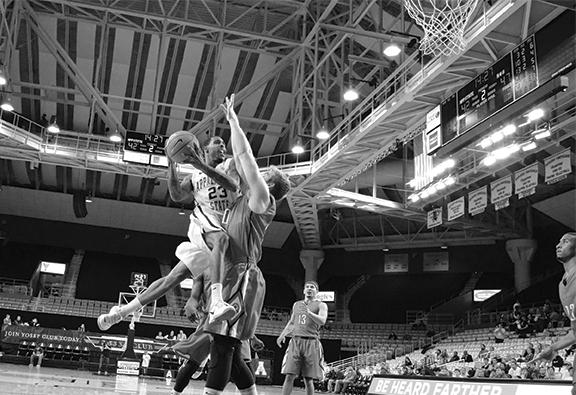 [dropcap size=small]A[/dropcap]fter a close first half and a sluggish start for the Mountaineers, App State rallied in the second to win 78-70 over North Greenville.

“It’s pretty obvious that we have some guys who are struggling to make shots,” head coach Jason Capel said. “Men lie, women lie but numbers don’t lie and the numbers are what they are and you can’t run from them or hide it. I know the guys that are missing shots right now and are lacking, I know they’re going to make those shots. We’ve seen guys make those shots in games for a year or two.”

However, statistics weren’t all that bad as the Mountaineers managed to beat the Crusaders in many other key categories.

The shining moment in the first half was seven rebounds and eight points from sophomore forward Michael Obacha, but it wouldn’t be enough as NGU had the lead at the half 43-37.

The second half was an entirely different story for the Mountaineers as they would find their stride on both ends of the court and would outscore the Crusaders 22-4 to start the half.

Part of the surge came from junior guard Mike Neal who had a career-high 27 points on the night to go along with three assists and three rebounds.

He had two of his three clutch 3-pointers in the second half to give App State the lead for the first time since early in the first half.

“It definitely helps pick the team up when you see another teammate getting going and playing with energy – it definitely makes you want to play with energy,” guard Frank Eaves said. “[Neal] made some critical shots that we needed down the stretch.”

Neal wasn’t the only Mountaineer to have a career night.

Obacha ended the game with a double-double, having 11 points and a career-high 16 rebounds. He also went 7-10 from the free-throw line, career-highs in both makes and attempts.

“Sometimes your offense isn’t there and when it isn’t, help your teammates,” Obacha said. “That’s my focus right now. If you’re not scoring, play defense to help your team win.”

Despite going 1-8 from beyond the arc in the second, North Greenville did manage to make things close and gritty, even amassing a few technical fouls along the way, but Obacha said it was more on them.

“We must learn to play hard the whole 40 minutes because there’s no time to let a team come back,” Obacha said. “This is a team game, when you play as a team you win games, when you play as individuals, you lose.”

Capel agreed that there were more reasons for the close game other than their shooting, reasons including players playing as individuals and not as a team.

“I know I normally come in here and say that all wins are good wins, but I’m not happy about this win,” Capel said. “I’m not happy with what we exhibited out there as a team. I’m hesitant to call us a team right now because it didn’t feel that way. We have to continue to grow, we have to continue to have guys understand and buy into what it takes to be successful. When we do that, we’re going to have a really good team and be successful.”

App State will play the second of its back-to-back home stand Sunday against UNC Charlotte. The game is scheduled to tip off at 2 p.m.