Cary Miller: an imposing figure with a smiling face 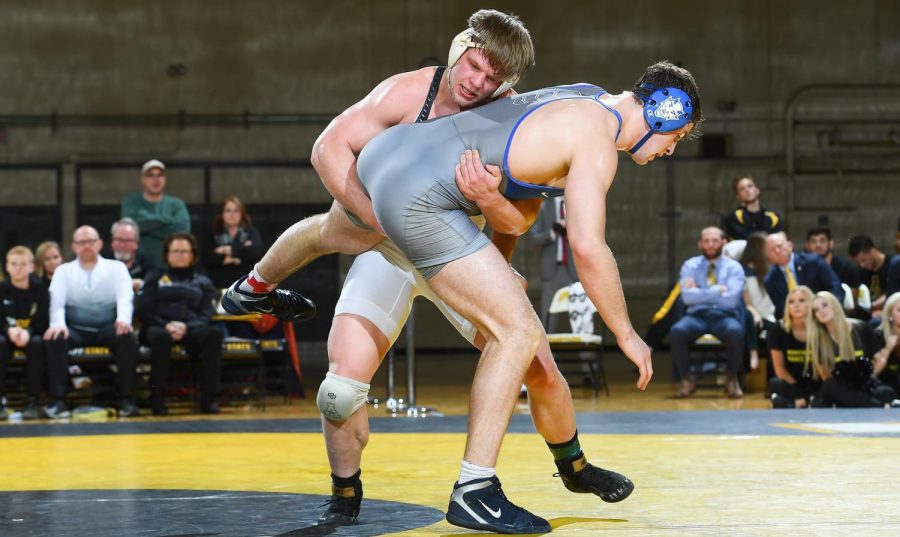 Senior heavyweight Cary Miller takes hold of an opponent from Duke University during their face off on Jan. 24. Mill- er is a Greensboro native and has wrestled since middle school.

Standing at just over six feet tall and weighing in at 285 pounds, senior heavyweight Cary Miller looks the part of a dominant college wrestler.

“He’s probably one of the most intimidating presences of any wrestler we’ve had here. When he walks out on the mat in Varsity Gym, people get on the edge of their seats,” head coach JohnMark Bentley said.

Miller grew up in Greensboro with his four siblings. His parents quickly became role models for him, displaying toughness that Miller strives to imitate today.

“Both of my parents were tough people who never complained. I complain about a lot of stuff until I think about how they wouldn’t complain about it, so I shouldn’t,” Miller said.

Wrestling isn’t Miller’s first sport. Instead, he swam for 10 years and played football. He was first introduced to wrestling by his older brother.

“I didn’t wrestle as a little kid, but my brothers did. They would always wrestle with me, but I didn’t know it as a sport. That was just something we did,” Miller said.

During seventh grade, the Kernodle Middle School wrestling coach approached Miller one day after football practice and told Miller that he would see him at the start of the wrestling season.

“From there, I’ve just had lots of great coaches that have always helped me out and tons of support from my hometown Greensboro,” Miller said.

At Northwest Guilford High School, Miller was a three-time all-conference wrestler, four-time All-American, and capped off his 45-0 senior season with a 4-A state championship at 220 pounds. He was also awarded all-conference honors during his football career, where he played multiple positions.

Miller committed to App State after a visit to the High Country.

“Coach Bentley talked to me personally on the visit. It was obvious that he knew just about everything about wrestling, but he had such good character, and I thought he was really cool,” Miller said. “I saw the success coach Bentley was having with Denzel (Dejournette), and I wanted to have that, too.”

Dejournette was an NCAA qualifier, all-American and Southern Conference champion during his App State career from 2013-16.

After Miller redshirted his first year at App State, he amassed a 21-12 record at 285 pounds, while wrestling behind Dejournette the following year. As a sophomore, he finished the season 18-9, ranked No. 32 in the coaches’ rankings for the heavyweight spot, and ended his junior season 24-13 after being ranked No. 28 by the NCAA Coaches’ Panel heading into the NCAA Championships. Miller was also named a member of the Southern Conference Academic Honor Roll during his junior campaign.

“He’s got a tremendous work ethic. He puts a lot of hours in, and he does the work. I think that’s probably the thing that has made him most successful,” Bentley said.

Aside from his accomplishments on the mat, Miller’s teammates and coaches are quick to recognize the teammate and leader that Miller is.

“He pulls for his teammates extremely hard, and he’s invested in their wrestling as well as he is his own,” Bentley said. “That’s really something that’s special when you get an athlete as good as he is, but is also just as good of a teammate as he is. He’s a great leader and leads by example. I can’t say enough great things about him.”

Fellow senior Matt Zovistoski has roomed and wrestled with Miller for nearly five years, and attests to Miller’s outstanding character.

“He’s an awesome teammate. He always comes in bringing the energy every day to practice, trying to motivate everyone else,” Zovistoski said.

As a Mountaineer, Miller has put together one of the most illustrious careers App State has seen. All-Southern Conference honors, an automatic NCAA Championship qualifier, and an overall 63-34 career record heading into his senior season have already solidified Miller’s legacy. Instead of pointing to one of his own accomplishments as his favorite memory from his time in Boone, Miller recalls one win of a teammate.

“My freshman year, we actually wrestled Duke, and one of my best friends Taylor Jackson was wrestling Jacob Kasper, and he was losing. The dual meet was pretty tight, and he came back in the third period and pinned Kasper,” Miller said.

After graduation, Miller said he is excited to explore many potential career paths.

“There are so many things that I’m interested in. Firefighting, fighting, the military, maybe something in sales,” Miller said.

While App State fans will remember Cary Miller for his success on the mat and positive impact on the program, Bentley will always remember Miller for a different reason.

“He’s always such a pleasant personality to be around. Every day he comes into practice, no matter how he’s feeling, no matter what’s going on with himself or the team, he’s got a smiling face,” Bentley said.