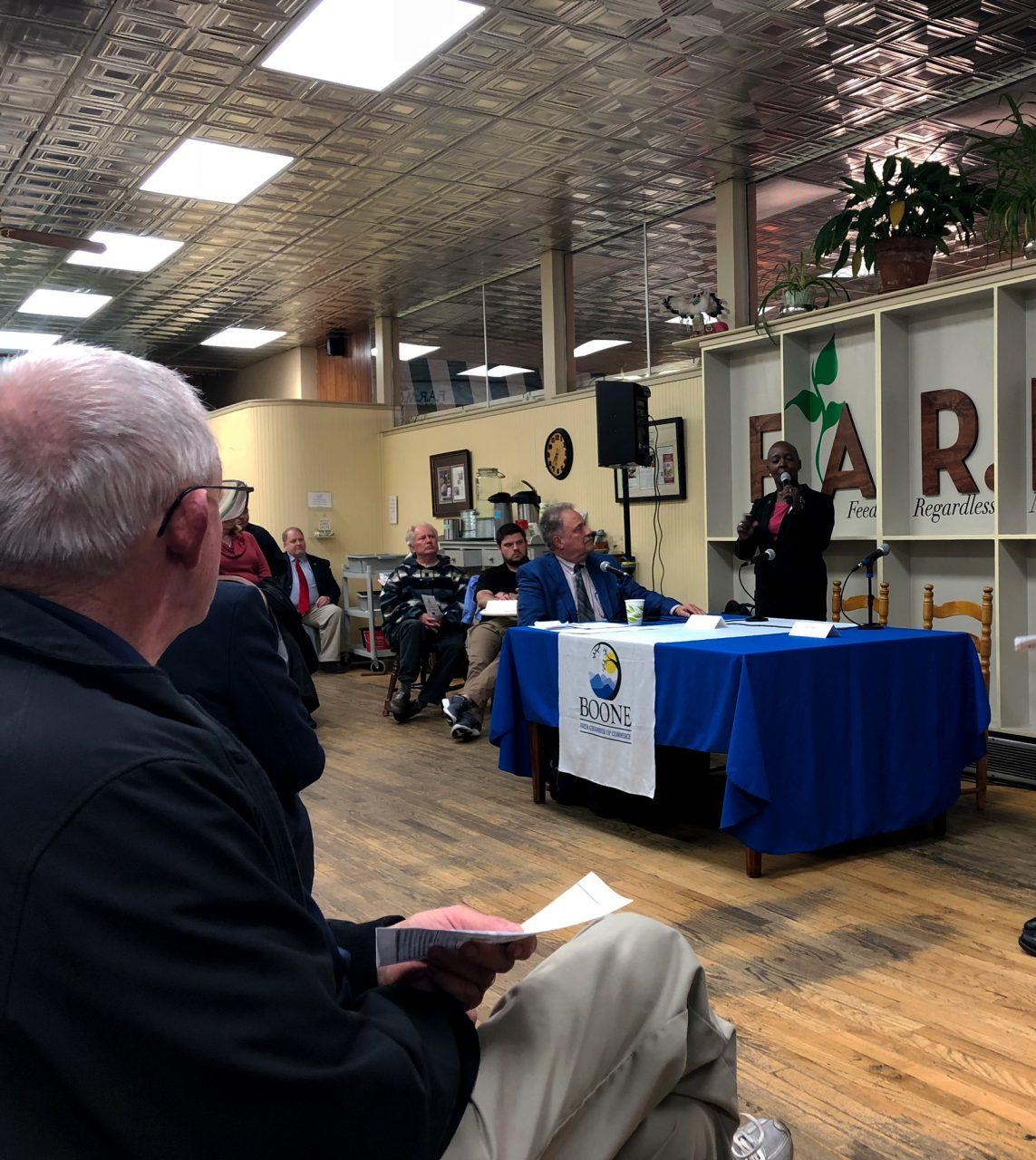 Primary candidate for the fifth US congressional district DD Adams speaks. Republican and Democratic candidates running for seats in the 2018 midterms gathered at F.A.R.M. cafe for a forum on Monday night.

On Monday night the Boone Area Chamber of Commerce hosted a forum at F.A.R.M. Cafe to give candidates for the 2018 primary election a chance to share their platforms. The primary election will take place on May 8.

The host, Omer Tomlinson, who works for Charter Communications, posed a range of questions concerning the economy, education, gun control, healthcare, local tourism and other topics of concern around Watauga County.

“The idea that making it harder for law-abiding citizens to acquire firearms would prevent any of these (school shootings) is wholly untrue,” Republican U.S. House candidate and National Rifle Association firearms instructor, Dillon Gentry said. “The idea that an assault weapons ban would prevent this is also inaccurate.”

The two republican candidates running for the office of U.S. House agreed that policy could not stop gun violence from occurring.

“I’m not sure that any one public policy can stop evil,” Virginia Foxx, current Republican representative for District 5, said. “If the 10 commandments, coming straight from God, did not teach us not to kill other people, I’m not sure that the plaintiff legislation that we could pass will do much better. We can do a better job in the schools, I think.”

The two democratic candidates for this office are Jenny Marshall and DD Adams. Adams was delayed due to weather, so Marshall answered the moderator’s questions on her own.

“We have exceptional children and we don’t fund (education) appropriately,” Jenny Marshall, a former teacher, said. “Those students are often times left with gaps in service because we just don’t put forth the resources to make sure they have an adequate, fair and reasonable education.”

After her arrival, Adams was given four minutes to share her platform without prompt. Adams said she believes that everybody should have a baseline of healthcare and that there is a way to make that happen so people can have a good quality of life.

The candidates for North Carolina Senate District 45 include Deanna Ballard and Shirley Randleman, both Republican incumbents.

“We’re constantly working on infrastructure issues,” Deanna Ballard, current representative and candidate for NC House said. “I’ve worked on an unpaved road in western Watauga in the last two months where I continue to push. It’s just like Senator Randleman says, ‘You don’t give up,’ you push and you push DOT to find and secure additional funding.”

“The Blue Ridge Parkway, I feel, is a great option for a revenue center for the High Country,” Block, said. “If we want to get down to a 0 percent tax bracket ever in North Carolina, we need to focus on our tourism; it is key to bringing money into the district.”

The main priorities in this campaign need to be keeping young people in the area and providing tourism jobs for these young people to help not only Watauga County, but also the entire state, according to Block.

The Chamber of Commerce will host its annual Meet the Candidates forum on Oct. 23 before the general election in November.

Featured photo caption: Candidate for the fifth US congressional district DD Adams speaks. Republican and Democratic candidates running for seats in the 2018 midterms gathered at F.A.R.M. cafe for a forum on Monday night.